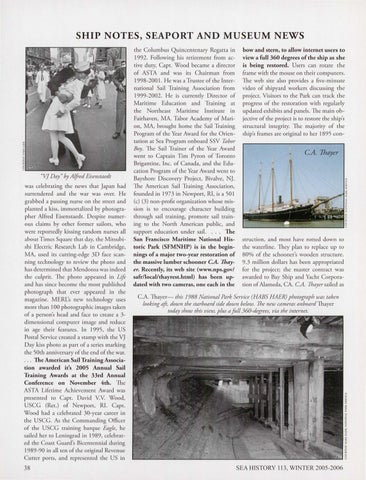 &quot;VJ Day&quot; by Alfred Eisenstaedt was celebrating the news that Japan had surrendered and the war was over. He grabbed a passing nurse on the street and planted a kiss, immortalized by photographer Alfred Eisenstaedt. Despite numerous claims by other former sailors, who were reportedly kissing random nurses all about Times Square that day, the Mitsubishi Electric Research Lab in Cambridge, MA, used its cutting-edge 3D face scanning technology to review the photo and has determined rhat Mendonsa was indeed the culprit. The photo appeared in Life and has since become the most published photograph that ever appeared in the magazine. MERLs new technology uses more than 100 photographic images taken of a person&#39;s head and face to create a 3dimensional computer image and reduce in age their features. In 1995, the US Postal Service created a stamp with the VJ Day kiss photo as part of a series marking the 50rh anniversary of the end of the war. . . . The American Sail Training Association awarded it&#39;s 2005 Annual Sail Training Awards at the 33rd Annual Conference on November 4th. The ASTA Lifetime Achievement Award was presented to Capt. David V.V. Wood, USCG (Rec.) of Newport, RI. Capt. Wood had a celebrated 30-year career in the USCG . As the Commanding Officer of the USCG training barque Eagle, he sailed her to Leningrad in 1989, celebrated the Coast Guard&#39;s Bicentennial during 1989-90 in all ten of the original Revenue Cutter ports, and represented the US in

the Columbus Quincentenary Regatta in 1992. Following his retirement from active duty, Capt. Wood became a director of ASTA and was its Chairman from 1998-2001. He was a Trustee of the International Sail Training Association from 1999-2002. He is currently Director of Maritime Education and Training at the Northeast Maritime Institute in Fairhaven, MA. Tabor Academy of Marion, MA, brought home the Sail Training Program of the Year Award for the Orientation at Sea Program onboard SSV Tabor Boy. The Sail Trainer of the Year Award went to Captain Tim Pyron of Toronto Brigantine, Inc. of Canada, and the Education Program of the Year Award went to Bayshore Discovery Project, Bivalve, NJ. The American Sail Training Association, founded in 1973 in Newport, RI, is a 501 (c) (3) non-profit organization whose mission is to encourage character building through sail training, promote sail training to the North American public, and support education under sail. . . . The San Francisco Maritime National Historic Park (SFMNHP) is in the beginnings of a major two-year restoration of the massive lumber schooner C.A. Thayer. Recently, its web site (www.nps.gov/ safr/local/thayrest.html) has been updated with two cameras, one each in the

bow and stern, to allow internet users to view a full 360 degrees of the ship as she is being restored. Users can rotate the frame with the mouse on their computers. The web site also provides a five-minute video of shipyard workers discussing the project. Visitors to the Park can track the progress of the restoration with regularly updated exhibits and panels. The main objective of the project is to restore rhe ship&#39;s structural integrity. The majority of the ship&#39;s frames are original to her 1895 con-

struction, and most have rotted down ro the waterline. They plan to replace up to 80% of the schooner&#39;s wooden structure. 9.3 million dollars has been appropriated for the project; the master contract was awarded to Bay Ship and Yacht Corporation of Alameda, CA. C.A. Thayer sailed as

C.A. Thayer- this 1988 National Park Service (HABS HAER) photograph was taken looking aft, down the starboard side down below. The new cameras onboard Thayer

today show this view, plus a fall 360-degrees, via the internet.