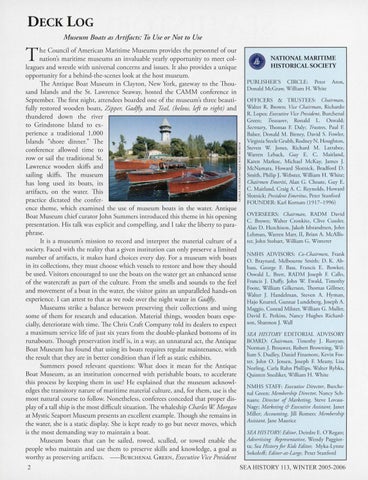 DECK LOG Museum Boats as Artifacts: To Use or Not to Use

he Council of American Maritime Museums provides the personnel of our nation&#39;s maritime museums an invaluable yearly opportunity to meet colleagues and wrestle with universal concerns and issues. It also provides a unique opportunity for a behind-the-scenes look at the host museum. The Antique Boat Museum in Clayton, New York, gateway to the Thousand Islands and the St. Lawrence Seaway, hosted the CAMM conference in September. The first night, attendees boarded one of the museum&#39;s three beautifully restored wooden boats, Zipper, Gadfly, and Teal, (below, left to right) and thundered down the river to Grindstone Island to experience a traditional 1,000 , Islands &quot;shore dinner.&quot; The ~ conference allowed time to &gt; row or sail the traditional St. ~~ Lawrence wooden skiffs and sailing skiffs. The museum ~ has long used its boats, its artifacts, on the water. This practice dictated the conference theme, which examined the use of museum boats in the water. Antique Boat Museum chief curator John Summers introduced this theme in his opening presentation. His talk was explicit and compelling, and I take the liberty to paraphrase. It is a museum&#39;s mission to record and interpret the material culture of a society. Faced with the reality that a given institution can only preserve a limited number of artifacts, it makes hard choices every day. For a museum with boats in its collections, they must choose which vessels to restore and how they should be used. Visitors encouraged to use the boats on the water get an enhanced sense of the watercraft as part of the culture. From the smells and sounds to the feel and movement of a boat in the water, the visitor gains an unparalleled hands-on experience. I can attest to that as we rode over the night water in Gadfly. Museums strike a balance between preserving their collections and using some of them for research and education. Material things, wooden boats especially, deteriorate with time. The Chris Craft Company told its dealers to expect a maximum service life of just six years from the double-planked bottoms of its runabouts. Though preservation itself is, in a way, an unnatural act, the Antique Boat Museum has found that using its boats requires regular maintenance, with the result that they are in better condition than if left as static exhibits. Summers posed relevant questions: What does it mean for the Antique Boat Museum, as an institution concerned with perishable boats, to accelerate this process by keeping them in use? He explained that the museum acknowledges the transitory nature of maritime material culture, and, for them, use is the most natural course to follow. Nonetheless, conferees conceded that proper display of a tall ship is the most difficult situation. The whaleship Charles W Morgan at Mystic Seaport Museum presents an excellent example. Though she remains in the water, she is a static display. She is kept ready to go but never moves, which is the most demanding way to maintain a boat. Museum boats that can be sailed, rowed, sculled, or towed enable the people who maintain and use them to preserve skills and knowledge, a goal as worthy as preserving artifacts. --BuRCHENAL GREEN, Executive Vice President