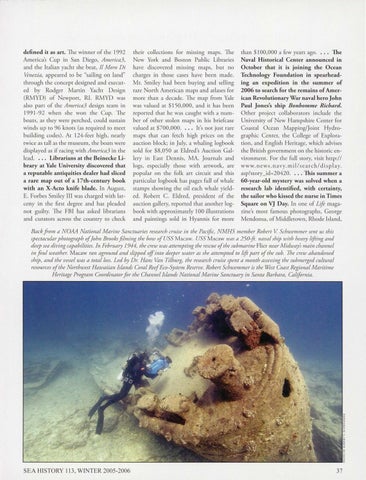 defined it as art. The winner of the 1992 America&#39;s Cup in San Diego, America3, and the Italian yacht she beat, IL Moro Di Venezia, appeared to be &quot;sailing on land&quot; through the concept designed and executed by Rodger Martin Yacht Design (RMYD) of Newpo rt, RI. RMYD was also part of the America3 design team in 1991-92 when she won the Cup. The boats, as they were perched, could sustain winds up to 96 knots (as required to meet building codes) . At 124-feet high, nearly twice as tall as the museum, the boats were displayed as if racing with America3 in the lead. . . . Librarians at the Beinecke Library at Yale University discovered that a reputable antiquities dealer had sliced a rare map out of a 17th-century book with an X-Acto knife blade. In August, E. Forbes Smiley III was charged with larceny in the first degree and has pleaded not guilty. The FBI has asked librarians and curators across the country to check

their collections for m1ss111g maps. The New York and Boston Public Libraries have discovered missing maps, but no charges in those cases have been made. Mr. Smiley had been buying and selling rare North American maps and adases for more than a decade. 1he map from Yale was valued at $150,000, and it has been reported that he was caught with a number of other stolen maps in his briefcase valued at $700,000 .. .. Ir&#39;s not just rare maps that can fetch high prices on the auction block; in July, a whaling logbook sold for $8,05 0 at Eldred&#39;s Auction Gallery in East Dennis, MA. Journals and logs, especially those with artwork, are popular on the folk art circuit and this particular logbook has pages full of whale stamps showing the oi l each whale yielded. Robert C. Eldred, president of the auction gallery, reported that another logbook with approximately 100 illustrations and paintings sold in Hyannis for more

than $ 100,000 a few years ago. . . . The Naval Historical Center announced in October that it is joining the Ocean Technology Foundation in spearheading an expedition in the summer of 2006 to search for the remains of American Revolutionary War naval hero John Paul Jones&#39;s ship Bonhomme Richard. Other project collabora tors include the University of New Hampshire Center for Coastal Ocean Mapping/Joint Hydrographi c Center, the College of Exploration, and English Herirage, which advises the British government on the histo ric environment. For the full story, visit http:// www. n ews. n avy. mil I searc h/di sp lay. asp?story_id=20420 .â&amp;#x20AC;˘â&amp;#x20AC;˘ . This summer a 60-year-old mystery was solved when a research lab identified, with certainty, the sailor who kissed the nurse in Times Square on VJ Day. In one of Life magazi ne&#39;s most fa mous photographs, George Mendonsa, of Middletown, Rhode Island,

Back from a NOAA National Ma rine Sanctuaries research cruise in the Pacific, NMHS member Robert V Schwemmer sent us this spectacular photograph ofJoh n Brooks filming the bow of USS Macaw. USS Macaw was a 250-ft. naval ship with heavy lifting and deep sea diving capabilities. In February 1944, the crew was attempting the rescue ofthe submarine Flier near Midway&#39;s main channel in foul weather. Macaw ran aground and slipped off into deeper water as she attempted to lift part of the sub. The crew abandoned ship, and the vessel was a total loss. Led by Dr. Hans Van Tilburg, the research cruise spent a month assessing the submerged cultural resources ofthe Northwest Hawaiian Islands Coral ReefEco-System Reserve. Robert Schwemmer is the West Coast Regional Maritime Heritage Program Coordinator for the Channel Islands National Marine Sanctuary in Santa Barbara, California.