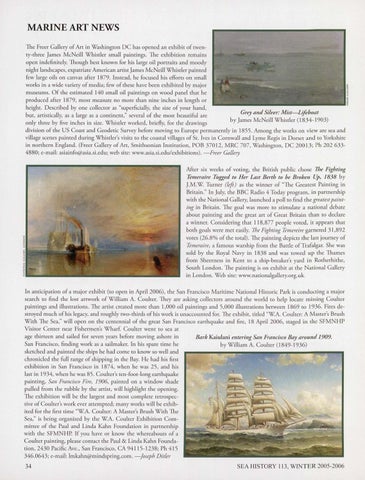 MARINE ART NEWS The Freer Gallery of Arr in Washington DC has opened an exhibit of twenty-three James McNeil! Whistler small paintings. The exhibition remains open indefinitely. Though best known for his large oil porrrairs and moody night landscapes, expatriate American artist James McNeil! Whistler painted few large oils on canvas after 1879. Instead, he focused his efforts on small works in a wide variety of media; few of these have been exhibited by major museums. Of the estimated 140 small oil paintings on wood panel rhar he produced after 1879, most measure no more rhan nine inches in length or height. Described by one collector as &quot;superficially, the size of your hand, Grey and Silver: Mist-Lifeboat but, artistically, as a large as a continent,&quot; several of the most beautiful are by James McNeill Whistler (1834-1903) only three by five inches in size. Whistler worked, briefly, for the drawings division of the US Coast and Geodetic Survey before moving to Europe permanently in 1855. Among the works on view are sea and village scenes painted during Whistler&#39;s visits to the coastal villages of Sr. Ives in Cornwall and Lyme Regis in Dorset and to Yorkshire in northern England. (Freer Gallery of Arr, Smithsonian Institution, POB 37012, MRC 707, Washington, DC 20013; Ph 202 6334880; e-mail: asiainfo@asia.si.edu; web sire: www.asia.si.edu/exhibitions). -Freer Gallery After six weeks of voting, the British public chose The Fighting Temeraire Tugged to Her Last Berth to be Broken Up, 1838 by J.M.W Turner (left) as the winner of &quot;The Greatest Painting in Britain.&quot; In July, the BBC Radio 4 Today program, in partnership with the National Gallery, launched a poll ro find rhe greatest painting in Britain. The goal was more to stimulate a national debate about painting and the great art of Great Britain than to declare a winner. Considering that 118,877 people voted, it appears that both goals were met easily. The Fighting Temereire garnered 31,892 votes (26.8% of the total). The painting depicts rhe last journey of Temeraire, a famous warship from the Barde of Trafalgar. She was sold by the Royal Navy in 1838 and was rowed up the Thames from Sheerness in Kent ro a ship-breaker&#39;s yard in Rorherhirhe, South London. The painting is on exhibit at rhe National Gallery in London. Web sire: www.narionalgallery.org.uk In anticipation of a major exhibit (to open in April 2006), the San Francisco Maritime National Historic Park is conducting a major search to find the lost artwork of William A. Coulter. They are asking collectors around the world ro help locate missing Coulter paintings and illustrations. The artist created more than 1,000 oil paintings and 5,000 illustrations between 1869 to 1936. Fires destroyed much of his legacy, and roughly two-thirds of his work is unaccounted for. The exhibit, tided &quot;WA. Coulter: A Master&#39;s Brush With The Sea,&quot; will open on the centennial of the great San Francisco earthquake and fire, 18 April 2006, staged in rhe SFMNHP Visitor Center near Fishermen&#39;s Wharf. Coulter went ro sea at age thirteen and sailed for seven years before moving ashore in Bark Kaiulani entering San Francisco Bay around 1909. San Francisco, finding work as a sail maker. In his spare rime he by William A. Coulter (1849-1936) sketched and painted the ships he had come to know so well and chronicled rhe full range of shipping in the Bay. He had his first exhibition in San Francisco in 1874, when he was 25, and his last in 1934, when he was 85. Coulrer&#39;s ren-foor-long earthquake painting, San Francisco Fire, 1906, painted on a window shade pulled from rhe rubble by the artist, will highlight the opening. The exhibition will be the largest and most complete retrospective of Coulrer&#39;s work ever attempted; many works will be exhibited for the first rime &quot;WA. Coulter: A Master&#39;s Brush With The Sea,&quot; is being organized by rhe W.A. Coulter Exhibition Committee of the Paul and Linda Kahn Foundation in partnership with the SFMNHP. If you have or know the whereabouts of a Coulter painting, please contact the Paul &amp; Linda Kahn Foundation, 2430 Pacific Ave. , San Francisco, CA 94115-1238; Ph 415 346.0643; e-mail: lmkahn@mindspring.com. -Joseph Ditler