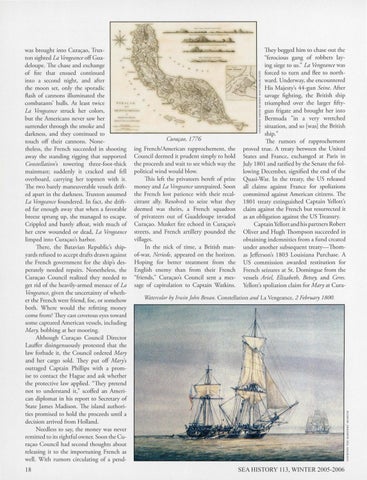 They begged him to chase out the was brought into Curas;ao, Trux"ferocious gang of robbers layton sighted La Vengeance off Guaing siege to us." La Vengeance was deloupe. The chase and exchange T fo rced to rnrn and flee to northof fire that ensued conti nued ward. Underway, she encountered into a second night, and after His Majesty's 44-gun Seine. After the moon set, only the sporadic savage fighting, the British ship flash of can nons illuminated the (' l"R .\ \ .\ 0, triumphed over the larger fiftycombatants' hulls. At least twice gun frigate and brought her into La Vengeance struck her colors, Bermuda "in a very wretched but the Americans never saw her surrender through the smoke and situation, and so [was] the British ~ ----ship." darkness, and they continued to Curafao, 1776 The rumors of rapprochement touch off their cannons. Nonetheless, the French succeeded in shooting ing French/American rapprochement, the proved true. A treaty between the United away the standing rigging that supported Council deemed it prudent simply to hold States and France, exchanged at Paris in Constellation's towering duee-foot-thick the proceeds and wait to see which way the July 1801 and ratified by the Senate the following December, signified the end of the mainmast; suddenly it cracked and fell political wind would blow. This left the privateers bereft of prize Quasi-War. In the treaty, the US released overboard, carrying her topmen with it. The two barely maneuverable vessels drift- money and La Vengeance unrepaired. Soon all claims against France for spoliations ed apart in the darkness. Truxton assumed the French lost patience with their recal- committed against American citizens. The La Vengeance fou ndered. In fact, she drift- citrant ally. Resolved to seize what they 1801 treaty extinguished Captain Yellott's ed far enough away that when a favorab le deemed was theirs, a French squadron claim against the French but resurrected it breeze sprung up, she managed to escape. of privateers out of Guadeloupe invaded as an obligation against the US Treasury. Captain Yellott and his partners Robert Crippled and barely afloat, with much of Curas;ao. M usket fire echoed in Curas;ao's her crew wounded or dead, La Vengeance streets, and French artillery pounded the Oliver and Hugh Thompson succeeded in villages. obtaining indemnities from a fund created limped into C uras;ao's harbor. In the nick of time, a British man- under another subsequent treaty-ThomThere, the Baravian Republic's shipyards refused to accept drafts drawn against of-war, Neriede, appeared on the horizon. as Jefferson's 1803 Louisiana Purchase. A the French government for the ship's des- Hoping for better treatment from the US commissio n awarded restitution for perately needed repairs. Nonetheless, the English enemy than from their French French seizures at St. Domingue from the Curas;ao Council realized they needed to "friends," Curas;ao's Council sent a mes- vessels Ariel, Elizabeth, Betsey, and Ceres. get rid of the heavily-armed menace of La sage of capirnlation to Captain Watkins. Yellort's spoliation claim for Mary at C uraVengeance, given the uncertainty of whethWatercolor by Irwin John Bevan. Co nstellation and La Vengeance, 2 February 1800. er the French were friend, foe, or somehow both . Where would the refitting money come from? They cast covetous eyes toward some captured American vessels, including Mary, bobbing at her mooring. Although Curas;ao Council Director Lauffer disingenuously protested that the law forbade it, the Council ordered Mary and her cargo sold. They put off Mary's outraged Captain Phillips with a promise to contact the Hague and ask whether the protective law applied. "They pretend not to understand it," scoffed an American diplomat in his report to Secretary of State James Madison. The island authorities promised to hold the proceeds until a decision arrived from Holland. Needless to say, the money was never remitted to its rightful owner. Soon the Curas;ao Council had second thoughts abo ut releasing it to the importuning French as well. With rumors circulating of a pend18