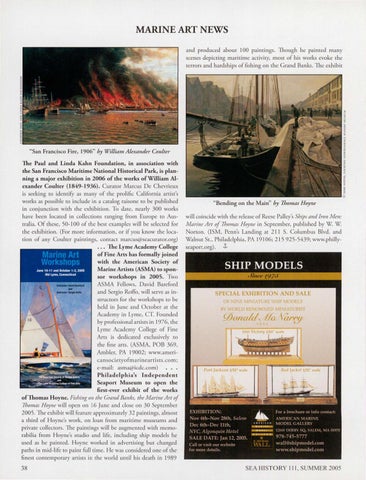 MARINE ART NEWS and produced about 100 pamnngs. Though he painted many scenes depicting maritime acriviry, mosr of his works evoke rhe terrors and hardships of fishing on rhe Grand Banks. The exhibi t

"San Francisco Fire, 1906" by William Alexander Coulter The Paul and Linda Kahn Foundation, in association with the San Francisco Maritime National Historical Park, is planning a major exhibition in 2006 of the works of William Alexander Coulter (1849-1936). Curator Marcus De Chevrieux is seeking to identify as many of rhe prolific California anise's works as possible to include in a catalog raisone to be published in conjunction wirh rhe exhibition. To dare, nearly 300 works have been located in collections ranging from Europe to Australia. Of rhese, 50-100 of rhe besr examples will be selected for rhe exh ibiti on. (Fo r more information, or if yo u know rhe location of any Coulter paintings, contact marcus@seacurator.org) . . â&#x20AC;˘ The Lyme Academy College of Fine Arts has formally joined with the American Society of Marine Artists (ASMA) to sponsor workshops in 2005. Two ASMA Fellows, David Bareford and Sergio Raffo, will serve as instructors for rhe workshops to be held in June and October ar rhe Academy in Lyme, CT. Founded by professional anises in 1976, rhe Lyme Academy College of Fine Ans is dedicated excl usively to rhe fine ans. (ASMA, POB 369, Ambler, PA 19002; www.americansoci eryo fm ar i nearris rs. com; e-mail : asma@icdc.com) Philadelphia's Independent Seaport Museum to open the first-ever exhibit of the works of Thomas Hoyne. Fishing on the Grand Banks, the Marine Art of lhomas Hoyne will open on 16 June and close on 30 September 2005. The exhibit will fearnre approxi mately 32 paintings, alm ost a rhird of Hoyne's work, on loan from maritime museums and private collectors. The paintings will be augmented wirh memorabilia from Hoyne's srndio and life, including ship models he used as he painted. Hoyne wo rked in advertising bur changed paths in mid-life to paint full rime. He was considered one of rhe fin est contemporary anises in rhe wo rld until his dearh in 1989