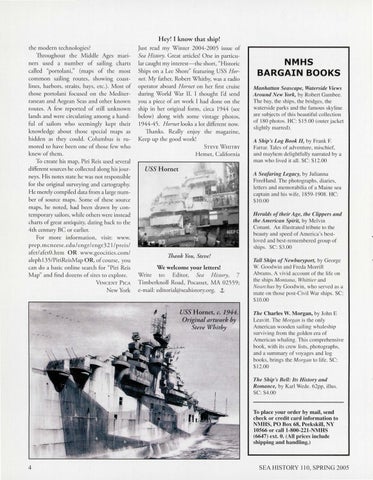 Hey! I know that ship! the modern technologies? Throughout th e Middle Ages mariners used a number of sailing charts called &quot;portolani,&quot; (maps of the most common sai ling routes, showing coastlines, harbors, straits, bays, etc. ). Most of those portolani focused on the Mediterranean and Aegean Seas and other known routes. A few reported of still unknown lands and were circulating among a handful of sai lors w ho seemingly kept their knowledge about those special maps as hidden as they could. Columbus is rumored to have been one of those few who knew of them. To create his map, Piri Reis used several different sources he collected along his journeys. His notes state he was not responsible for the o ri ginal surveying and cartography. He merely co mpiled data from a large number of source maps. Some of these source maps, he noted , had been drawn by contemporary sailors, w hile others were instead charts of great antiqui ty, dating back to the 4th century BC or earlier. For more information, visi t: www. prep . mcn eese .edu /e n g r/ e ngr32 1 /preis/ afet/afetO.htm OR www.geociti es .com / alephl35/PiriReisMap OR, of course, yo u can do a bas ic online search for &quot; Piri Reis Map&quot; and find doze ns of sites to explo re. VIN CENT PrcA New York

Just read my Winter 2004-2005 issue of Sea H istory. G rear articles! One in particular caught my interest-the short, &quot;Historic Ships on a Lee Shore&quot; featuring USS Hornet. My fath er, Robert Whitby, was a radio operator aboard Ho rnet on her first cruise during World War II. I thought I&#39;d send you a piece of art work I had done on the ship in her original form, circa 1944 (see below) along with some vimage photos, 1944-45. Ho rnet looks a lot different now. Thanks. Reall y enjoy the magazine, Keep up the good work! STEVE WHITBY

NMHS BARGAIN BOOKS Manhattan Seascape, Waterside Views Around New York, by Robert Gambee. The bay, the ships, the bridges, the waterside parks and the famous skyline are subjects of thi s beautiful collection of 180 photos. HC: $ 15.00 (outer jac ket slightly marred). A Ship&#39;s Log Book II, by Frank F. Farrar. Tales of adventure, mi schief, and mayhem delightfully narrated by a man who li ved it all. SC: $ 12.00 A Seafaring Legacy, by Juli anna FreeHand. The photographs, diaries, letters and memorabilia of a Maine sea captain and hi s wife, 1859- 1908. HC : $ 10.00 Heralds of their Age, the Clippers and the American Spirit, by Melvin Conant. An illustrated tribute to the beauty and speed of Ameri ca&#39;s bestloved and best-remembered group of ships. SC: $3 .00

Tall Ships of Newburyport, by George W. Goodwin and Freda Morrill Abrams. A vivid acco unt of the life on the ships Montan.a, Whi1tier and Nearchus by Goodwin, who served as a mate on those post-Ci vil War ships. SC: $ 10.00 The Charles W. Morgan, by John E Leav itt. The Morgan is the onl y American wooden sail ing whaleship surviving from the golden era of American wha ling. Th is comprehensive book, with its crew li sts, photogra phs, and a summary of voyages and log books, brings the Morgan to life . SC: $ 12.00 The Ship&#39;s Bell: Its History and Romance, by Karl Wede. 62pp, illus. SC: $4.00