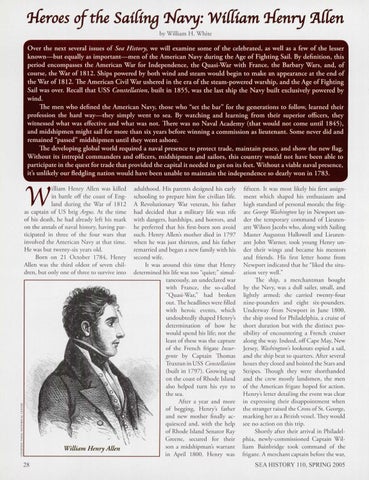 Over the next several issues of Sea History, we will examine some of the celebrated, as well as a few of the lesser known-but equally as important-men of the American Navy during the Age of Fighting Sail. By definition, this period encompasses the American War for Independence, the Quasi-War with France, the Barbary Wars, and, of course, the War of 1812. Ships powered by both wind and steam would begin to make an appearance at the end of the War of 1812. The American Civil War ushered in the era of the steam-powered warship, and the Age of Fighting Sail was over. Recall that USS Constellation, built in 1855, was the last ship the Navy built exclusively powered by wind. The men who defined the American Navy, those who &quot;set the bar&quot; for the generations to follow, learned their profession the hard way-they simply went to sea. By watching and learning from their superior officers, they witnessed what was effective and what was not. There was no Naval Academy (that would not come until 1845), and midshipmen might sail for more than six years before winning a commission as lieutenant. Some never did and remained &quot;passed&quot; midshipmen until they went ashore. The developing global world required a naval presence to protect trade, maintain peace, and show the new flag. Without its intrepid commanders and officers, midshipmen and sailors, this country would not have been able to participate in the quest for trade that provided the capital it needed to get on its feet. Without a viable naval presence, it&#39;s unlikely our fledgling nation would have been unable to maintain the independence so dearly won in 1783. illiam Henry Allen was killed in battle off the coast of England during the War of 1812 as captain of US brig Argus. At the time of his death, he had already left his mark on the annals of naval history, having participated in three of the four wars that involved the American Navy at that time. He was but twenty-six years old. Born o n 21 October 1784, Henry Allen was the third oldest of seven children , bur only one of three to survive inro

adulthood. His parenrs designed his early schooling to prepare him for civilian life. A Revolutionary War veteran, his father had decided that a military life was rife with dangers, hardships, and horrors, and he preferred that his first-born son avoid such. Henry Allen&#39;s mother died in 1797 when he was just thirteen , and his father remarried and began a new family with his second wife. Ir was around this rime that Henry determined his life was too &quot;quiet; &quot; simultaneously, an undeclared war with France, rhe so-called &quot;Quasi-War,&quot; had broken out. The headlines were filled with heroic evenrs, which undoubtedly shaped Henry&#39;s determination of how he would spend his life; not the least of these was the capture of the French frigate Insurgente by Captain Thomas Truxtun in USS Constellation (built in 1797). Growing up on the coast of Rhode Island also helped turn his eye to the sea. After a year and more of begging, Henry&#39;s father and new mother finally acquiesced and, with the help of Rhode Island Senator Ray Greene, secured for their son a midshipman&#39;s warranr in April 1800. Henry was

fifteen. Ir was most likely his first assignmenr which shaped his enrhusiasm and high standard of personal morals; the frigate George Washington lay in Newport under the temporary command of Lieutenant Wilson Jacobs who, along with Sailing Master Augustus Hallowell and Lieutenant John Warner, rook young Henry under their wings and became his menrors and friends. His first letter home from Newport indicated that he &quot;liked the situation very well.&quot; 1l1e ship, a merchantman bought by the Navy, was a dull sailer, small, and lightly armed; she carried twenty-four nine-pounders and eight six-pounders. Underway from Newport in June 1800, rhe ship stood for Philadelphia, a cruise of short duration but with rhe distinct possibility of encountering a French cruiser along the way. Indeed, off Cape May, New Jersey, Washington&#39;s lookouts espied a sai l, and the ship bear ro quarters. After several hours they closed and hoisted me Stars and Stripes. Though they were shorthanded and the crew mostly landsmen, the men of the American frigate hoped for action. Henry&#39;s letter derailing the event was clear in expressing their disappointment when the stranger raised the Cross of St. George, marking her as a British vessel. They would see no action on this trip. Shortly after their arrival in Philadelphia, newly-commissioned Captain William Bainbridge rook command of the frigate. A merchanr captain before the war, SEA HISTORY 110, SPRING 2005