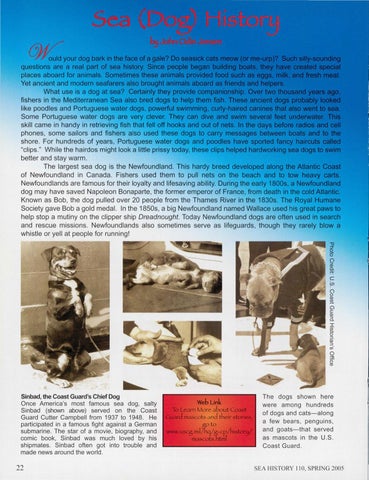 questions places aboard fOr Yet ancient and modern What use is a dog at fishers in the Mediterranean Sea like poodles and Portuguese water dogs, Some Portuguese water dogs are very elev â&amp;#x20AC;˘ skill came in handy in retrieving fish that fell off h phones, some sa ilors and fishers also used these dogs shore. For hundreds of years, Portuguese water dogs and &quot;clips. &quot; While the hairdos might look a little prissy today, these clip better and stay warm . The largest sea dog is the Newfoundland . This hardy breed devefo of Newfoundland in Canada . Fishers used them to pull nets on the beach a Newfoundlands are famous for their loyalty and lifesaving ability. During the early 18 dog may have saved Napoleon Bonaparte, the fo rmer emperor of France, from death in the Known as Bob, the dog pulled over 20 people from the Thames River in the 1830s. The Royaf Society gave Bob a gold medal. In the 1850s, a big Newfoundland named Wallace used his great paw help stop a mutiny on the clipper ship Dreadnought. Today Newfou ndland dogs are often used in search and rescue missions. Newfoundlands also sometimes serve as lifeguards, though they rarely blow a whistle or yell at people fo r running!

Once America &#39;s most famous sea dog , salty Sinbad (shown above) served on the Coast Guard Cutter Campbell from 1937 to 1948. He participated in a famous fight against a German submarine. The star of a movie, biography, and comic book, Sinbad was much loved by his shipmates. Sinbad often got into troub le and made news around the world.

The dogs shown here were among hundreds of dogs and cats-along a few bears , penguins , and goats-that served as mascots in the U.S . Coast Guard .