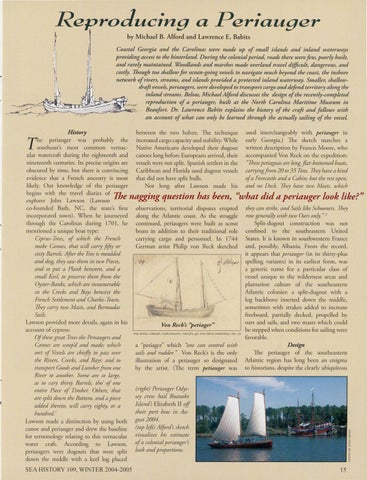 Reproducing a Periauger by Michael B. Alford and Lawrence E. Babits Coastal Georgia and the Carolinas were made up of small isl.ands and inland waterways providing access to the hinterland. During the colonial period, roads there were few, poorly built, and rarely maintained. Woodlands and marshes made overland travel difficult, dangerous, and costly. Though too shallow for ocean-going vessels to navigate much beyond the coast, the inshore network of rivers, streams, and islands provided a protected inland waterway. Smaller, shallowdraft vessels, periaugers, were developed to transport cargo and defend territory along the inland streams. Below, Michael Alford discusses the design ofthe recently-completed reproduction of a periauger, built at the North Carolina Maritime Museum in Beaufort. Dr. Lawrence Babits explains the history of the craft and follows with an account of what can only be learned through the actually sailing of the vessel.

becween rhe cwo halves. The technique increased cargo capacity and stability. While Native Americans developed their dugout canoes long before Europeans arrived, rheir vessels were nor spliL Spanish settlers in rhe Caribbean and Florida used dugout vessels rhar did nor have splir hulls. Nor long after Lawson made his

beg,ins wiJrhhrheLarravel di(aLaries of 1he exp orer o n wson wson co-founded Barh, NC, rhe srare's first incorporated rown). When he journeyed rhrough rhe Carolinas during 1701, he mentioned a unique boar rype: Ciprus-Trees, of which the French make Canoes, that will carry fifty or sixty Barrels. After the Tree is moulded and dug, they saw them in two Pieces, and so put a Plank between, and a small Keel, to preserve them from the Oyster-Banks, which are innumerable in the Creeks and Bays betwixt the French Settlement and Charles-Town. They carry two Masts, and Bermudas Sails. Lawson provided more derails, again in his accounr of cypress: Of these great Trees the Pereaugers and Canoes are scoop'd and made; which sort of Vessels are chiefly to pass over the Rivers, Creeks, and Bays; and to transport Goods and Lumber from one River to another. Some are so large, as to cary thirty Barrels, tho' of one entire Piece of Timber. Others, that are split down the Bottom, and a piece added thereto, will carry eighty, or a hundred. ' Lawson made a distinction by using borh canoe and periauger and drew rl1e baseline for terminology relating ro this vernacular water craft. According ro Lawson, periaugers were dugouts that were split down the middle with a keel log placed

used interchangeably wirh periauger 111 early Georgia.) 1he sketch marches a written description by Francis Moore, who accompanied Von Reck on rhe expedirion: "These petiaguas are long, flat-bottomed boats, carrying from 20 to 35 Tons. They have a kind ofa Forecastle and a Cabin; but the rest open, and no Deck. They have two Masts, which

nagging question has been, ''what did a periauuer look like?" Ci

they can strike, and Sails like Schooners. They row generally with two Oars only. " 2 Splir-dugour construction was nor confined ro rhe southeastern United States. Ir is known in sourhwesrern France and, possibly, Albania. From rhe record, ir appears rlrnr periauger (in irs thirty-plus , '~f fhf~. spelling variants) in its earliest form, was a generic nan1e for a particular class of vessel unique ro rhe wilderness areas and plantation culture of the southeastern Atlantic colonies: a split-dugout with a log backbone inserted down the middle, sometimes with srrakes added ro increase freeboard, partially decked, propelled by k' " ,, oars and sails, and cwo masts which could Von Rec s petiager be stepped when conditions for sailing were Tll E ROYAL LIBRARY, COPE......-HAGEN: NKS565 40: VON RECK ORAWJ!"GS, NO. J9 favorable . D esign a "periager" which ''one can control with sails and rudder. " Von Reck's is rhe only The periauger of rhe sourheasrern illustration of a periauger so designated Atlantic region has long been an enigma by rhe artisL (The term petiauger was ro hisrorians, despite the clearly ubiquirous

8 Dear Husband, an extract from Whaling Letters, edited by Genevieve Darden with an introduction by Thomas Hale and Irving Post • 12 North...

8 Dear Husband, an extract from Whaling Letters, edited by Genevieve Darden with an introduction by Thomas Hale and Irving Post • 12 North...