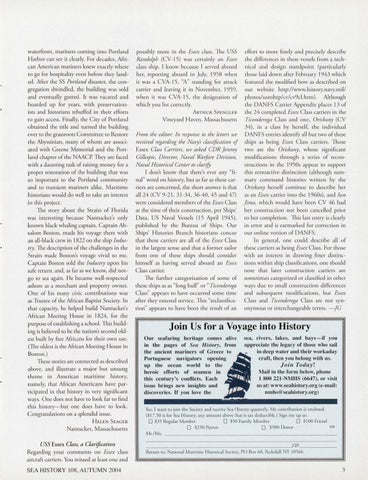 waterfront, mariners coming into Portland Harbor can see it clearly. For decades, African American mariners knew exactly where to go for hospitality even before d1ey landed. After me SS Portland disaster, the congregation dwindled, the building was sold and eventually gutted. It was vacated and boarded up for years, wirh preservarionisrs and historians rebuffed in their efforts to gain access. Finally, the C ity of Portland obtained the ride and turned the building over to rhe grassroots Committee to Restore the Abyssinian, many of whom are associated with G reene Memorial and rhe Portland chapter of the NAACP. They are faced w ith a daunting task of raising money for a proper restoration of rhe building that was so important to the Portland community and to transient mariners alike. Maritime historians would do well to rake an interest in this project. The story about rhe Straits of Florida was interesting because Nantucket&#39;s only known black whaling captain, Captain Absalom Boston, made his voyage there with an all-black crew in 1822 on the ship Industry. The description of rhe challenges in rhe Straits made Boston&#39;s voyage vivid to me. Captain Boston sold rhe Industry upon his safe return, and, as far as we know, did norgo to sea agai n. He became well-respected ashore as a merchant and property owner. One of his many civic contributions was as Trustee of rhe African Baptist Society. In that capacity, he helped build Nantucket&#39;s African Meeting House in 1824, for rhe purpose of establishing a school. This building is believed to be rhe nation&#39;s second oldest built by free Africans for rheir own use. (Th e oldest is rhe African Meeting House in Boston.) These stories are connected as described above, and illustrate a major bur unsung theme in American maritime history, namely, rhat African Americans have participated in rhat history in very significant ways. One does not have ro look far to find this history-but one does have to look. Congratulations on a splendid issue. H ELEN SEAGER

USS Essex Gass, a Garification Regarding yo ur comments on Essex class aircraft carriers. You missed at least one and SEA HISTORY 108 , AUTUMN 2004

possibly more in the Essex class. The USS Randolph (CV- 15) was certainly an Essex

effort to more finely and precisely describe rhe differences in these vessels from a techclass ship. I know because I served aboard nical and design standpoint (particularly her, reporting aboard in July, 1958 when those laid down after February 1943 which it was a CVA-15, &#39;&#39;A&quot; standing for arrack featured rhe modified bow as described on carrier and leaving ir in November, 1959, our website http://www. history.navy.mil/ when it was CVA- 15, the designation of photos/usnshrp/cv/cv9cl. hrm). AJrhough which yo u list correctly. rhe DANFS Carrier Appendix places 13 of ARTHUR SPENGLER the 24 completed Essex Class carriers in the Vi neyard Haven, Massachusem Ticonderoga C lass and one, Oriskany (CV 34), in a class by herself, me individual From the editor: In response to the letters we DANFS entries identify all bur rwo of these received regarding the Navy&#39;s classification of ships as being Essex C lass carriers. Those Essex Class Carriers, we asked CDR Jeremy rwo are rhe Oriskany, whose sign ificant Gillespie, Director, Naval Warfare Division, modifications through a series of reconNaval Historical Center to clarifj. structions in rhe 1950s appear to support I don&#39;t know rhar there&#39;s ever any &quot;fithis retroactive distinction (altho ugh sumnal&quot; word on history, bur as far as these car- mary command histories written by the riers are concerned, the short answer is rhar Oriskany herself continue to describe her all 24 (CV9-2 1, 3 1-34, 36-40, 45 and 47) as an Essex carrier into rhe 1960s), and lwo were considered members of the Essex Class Jima, which would have been CV 46 had at the time of meir construction, per Ships&#39; her construction nor been cancelled prior Data, US Naval Vessels (15 April 1945), to her completion . &#39;This last entry is clearly published by me Bureau of Ships. Our in erro r and is earmarked for correction in Ships&#39; Histories Branch historians concur our online version of DANFS . that these carriers are all of the Essex C lass In ge neral, one could descri be all of in the largest sense and that a former sailor these carriers as being Essex Class. For those from one of these ships should consider with an interest in drawing finer distinchimself as having served aboard an Essex tions with in ship classifications, one should note that later construction carriers are C lass carrier. The further categorization of some of sometimes categorized or classified in other these ships as as &quot;long hull&quot; or &quot;Ticonderoga ways due to small co nstruction differences Class&quot; appears to have occurred some rime and subsequent modifications, bur Essex after rhey entered service. This &quot;reclassi fica- C lass and Ticonderoga C lass are nor synrion&quot; appears to have been rhe result of an onymous or interchangeable terms. - JG

Join Us for a Voyage into History Our seafaring heritage comes alive in the pages of Sea History, from the ancient mariners of Greece to Portuguese navigators opening up the ocean world to the heroic efforts of seamen in this century&#39;s conflicts. Each issue brings new insights and discoveries. If you love the

sea, rivers, lakes, and bays-if you appreciate the legacy of those who sail in deep water and their workaday craft, then you belong with us.