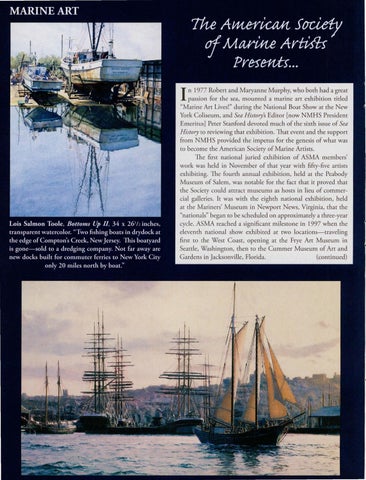 n 1977 Robert and Maryanne Murphy, who both had a great passion for the sea, mounted a marine art exhibition tided "Marine Art Lives!" during the National Boat Show at the New York Coliseum, and Sea History's Editor [now NMHS President Emeritus] Peter Stanford devoted much of the sixth issue of Sea History to reviewing that exhibition. That event and the support from NMHS provided the impetus for the genesis of what was to become the American Society of Marine Artists. The first national juried exhibition of ASMA members' work was held in November of that year with fifty-five artists exhibiting. The fourth annual exhibition, held at the Peabody Museum of Salem, was notable for the fact that it proved that the Society could attract museums as hosts in lieu of commercial galleries. It was with the eighth national exhibition, held at the Mariners' Museum in Newport News, Virginia, that the "nationals" began to be scheduled on approximately a three-year cycle. ASMA reached a significant milestone in 1997 when the eleventh national show exhibited at two locations-traveling first to the West Coast, opening at the Frye Art Museum in Seattle, Washington, then to the Cummer Museum of Art and Gardens in Jacksonville, Florida. (continued)