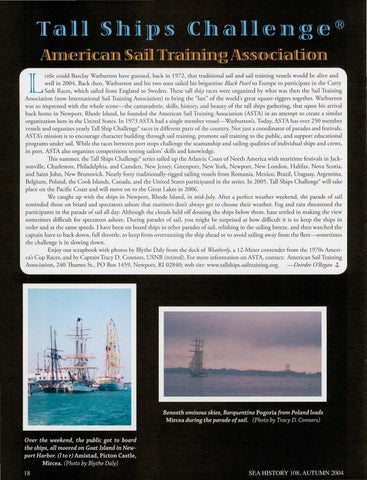 ittle could Barclay Warburton have guessed, back in 1972, that traditional sai l and sail training vessels would be alive and well in 2004. Back [hen, Warburton and his rwo sons sailed his brigantine Black Pearl to Europe to panicipa[e in the Cuny Sark Races, which sailed from England to Sweden. These rail ship races were organized by what was then the Sail Training Association (now International Sail Training Association) to bring [he &quot;last&quot; of the world&#39;s great square-riggers together. Warburton was so impressed with the whole scene-the camaraderie, skills, history, and beauty of the tall ships gathering, that upon his arrival back home in Newport, Rhode Island, he founded the American Sail Training Association (ASTA) in an anempt to create a similar organization here in the United States. In 1973 ASTA had a single member vessel-Warburton&#39;s. Today, ASTA has over 250 member vessels and organizes yearly Tall Ship Challenge&quot; races in different parts of the country. Not just a coordinator of parades and festivals, ASTA&#39;s mission is to encourage character building [hrough sail training, promote sail training to the public, and support educational programs under sail. While the races berween port stops challenge the seamanship and sailing qualities of individual ships and crews, in port, ASTA also organizes competitions testing sailors&#39; skills and knowledge. This summer, the Tall Ships Challenge• series sailed up the Atlantic Coast of North America with maritime festivals in Jacksonville, C harleston, Philadelphia, and Camden, New Jersey, Greenport, New York, Newport, New London, Halifax, Nova Scotia, and Saint John, New Brunswick. Nearly forty traditionally-rigged sailing vessels from Romania, Mexico, Brazil, Uraguay, Argentina, Belgium, Poland, the Cook Islands, Canada, and the United States participated in the series. In 2005, Tall Ships Challenge&quot; will take place on the Pacific Coast and will move on to the Great Lakes in 2006. We caught up with the ships in Newport, Rhode Island, in mid-July. After a perfect weather weekend, the parade of sail reminded those on board and spectators ashore that mariners don&#39;t always ger to choose their weather. Fog and rain threatened rhe participants in the parade of sail all day. Although the clouds held off dousing the ships below them, haze serried in making the view sometimes difficult for spectators ashore. During parades of sail, you mighr be surprised at how difficult it is to keep rhe ships in order and at the same speeds. I have been on board ships in other parades of sail, relishing in the sailing breeze, and rhen watched the captain have to back down, full throttle, to keep from overrunning the ship ahead or to avoid sailing away from the fleer-sometimes rhe chal lenge is in slowing down. Enjoy our scrapbook with photos by Blythe Daly from the deck of Weatherly, a 12-Merer contender from the 1970s America&#39;s Cup Races, and by Captain Tracy D . Connors, USNR (retired). For more information on ASTA, contact: American Sail Training Association, 240 Thames Sr., PO Box 1459, Newport, RI 02840; web sire: www.rallships.sailrraining.org. -Deirdre O&#39;Regan _!,