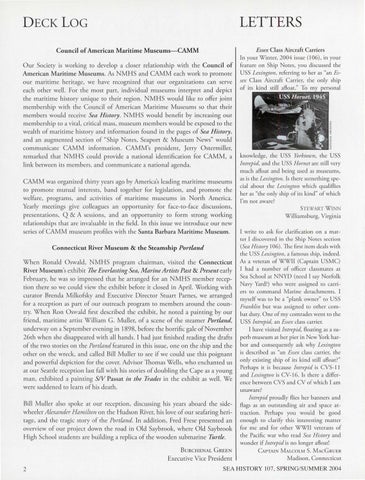 DECK LOG Council of American Maritime Museums-CAMM Our Society is working to develop a closer relationship with the Council of American Maritime Museums. As NMHS and CAMM each work to promote our maritime heritage, we have recognized that our organizations can serve each other well. For the most part, individual museums interpret and depict the maritime history unique to their region. NMHS would like to offer joint membership with the Co uncil of American Maritime Museums so that their members would receive Sea History. NMHS would benefit by increasing our membership to a vital, critical mass, museum members would be exposed to the wealth of maritime history and information found in the pages of Sea History, and an augmented section of &quot;Ship Notes, Seaport &amp; Museum News&quot; would communicate CAMM information. CAMM&#39;s president, Jerry Ostermiller, remarked that NMHS could provide a national identification for CAMM, a link between its members, and communicate a national agenda. CAMM was organized thirty years ago by America&#39;s leading maritime museums to promote mutual interests, band together for legislation, and promote the welfare, programs, and activities of maritime museums in North America. Yearly meetings give colleagues an opportunity for face-to-face discussions, presentations, Q &amp; A sessions, and an opportunity to form strong working relationships that are invaluable in the field. In this issue we introduce our new series of CAMM museum profiles with the Santa Barbara Maritime Museum. Connecticut River Museum &amp; the Steamship Portland When Ronald Oswald, NMHS program chairman, visited the Connecticut River Museum&#39;s exhibit The Everlasting Sea, Marine Artists Past &amp; Present early February, he was so impressed that he arranged for an NMHS member reception there so we could view the exhibit before it closed in April. Working with curator Brenda Milkofsky and Executive Director Stuart Parnes, we arranged for a reception as part of our outreach program to members around the country. When Ron Oswald first described the exhibit, he noted a painting by our friend, maritime artist William G. Muller, of a scene of the steamer Portland, underway on a September evening in 1898, before the horrific gale of November 26th when she disappeared with all hands. I had just finished reading the drafts of the two stories on the Portland featured in this issue, one on the ship and the other on the wreck, and called Bill Muller to see if we could use this poignant and powerful depiction for the cover. Advisor Thomas Wells, who enchanted us at our Seattle reception last fall with his stories of doubling the Cape as a young man, exhibited a painting S/V Passat in the Trades in the exhibit as well. We were saddened to learn of his death. Bill Muller also spoke at our reception , discussing his years aboard the sidewheeler Alexander Hamilton on the Hudson River, his love of our seafaring heritage, and the tragic story of the Portland. In addition, Fred Frese presented an overview of our project down the road in Old Saybrook, where Old Saybrook High School students are building a replica of the wooden submarine Turtle. BuRCHENAL GREEN

knowledge, the USS Yorktown, the USS Intrepid, and the USS Ho rnet are still very much afloat and being used as museums, as is the Lexington. Is there something special about the Lexington which qualiflies her as &quot;the only ship of its kind&quot; of which I&#39;m not aware? STEWART WINN

Williamsburg, Virginia I write to ask for clarification on a matter I discovered in the Ship Notes section (Sea H istory 106). The first item deals with the USS Lexington, a famous ship, indeed. As a veteran of WWII (Captain USMC) I had a number of officer classmates at Sea School at NNYD (need I say Norfo lk Navy Yard?) who were assigned to carriers to co mmand Marine detachm ents. I myself was to be a &quot;plank owner&quot; to USS Franklin but was assigned to other combat dury. One of my comrades went to the USS Intrepid, an Essex class carrier. I have visited Intrepid, floatin g as a superb museum at her pier in New York harbor and consequently ask why Lexington is described as &quot;an Essex class carrier, the only existing ship of its kind still afloat? &quot; Perhaps it is because Intrepid is CVS- 11 and Lexington is CV-16. Is there a difference between CVS and CV of which I am unaware? Intrepid proudly Ri es her banners and Rags as an outstanding air and space attraction. Perhaps you would be good enough to clarify this interesting matter for me and for other WWII veterans of the Pacific war who read Sea H istory and wonder if Intrepid is no longer afloat! CAPTAIN MALCOLM

8 Schooner Sultana: Building an Eighteenth-Century Reproduction for the Twenty-First Century, by Drew McMullen • 12 Historic Ships on a Lee Shore, by Jack Willard, James Kirk and John Kochiss, and William S. Dudley • 16 Forbidden to Sail: Steamship Portland, 1890-1898, by Deborah Marx • 19 Lost and Found: The Search for the Portland, by Matthew Lawrence • 22 The Maritime History of the Straits of Florida: Where Oceanography Makes History, by Richard J. King • 30 Santa Barbara Maritime Museum, by Betsy Crowfoot • 33 Maritime History on the Internet: Whaling Before the Twentieth Century, by Peter McCracken •