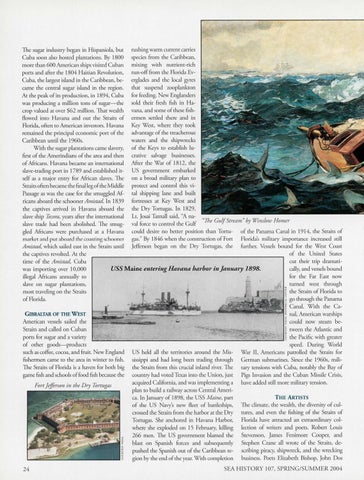 The sugar industry began in Hispaniola, but rushing warm current carries Cuba soon also hosted plantations. By 1800 species from the Caribbean, more than 600 American ships visited Cuban mixing with nutrient-rich ports and after the 1804 Haitian Revolution, run-off from the Florida EvCuba, the largest island in the Caribbean, be- erglades and the local gyres came the central sugar island in the region. that suspend w oplankton At the peak of its production, in 1894, Cuba for feeding. New Englanders was producing a million tons of sugar- the sold their fresh fish in H acrop valued at over $62 million. Thar wealth vana, and some of these fishflowed into H avana and our the Straits of ermen serried there and in Florida, often to American investors. Havana Key West, where they took remained the principal economic port of the advantage of the treacherous waters and the shipwrecks Caribbean until the 1960s. With the sugar plantations came slavery, of the Keys to establish lufirst of the Amerindians of the area and then crative salvage businesses. of Africans. H avana became an international After the War of 1812, the slave-trading port in 1789 and established it- US government embarked self as a major entry fo r African slaves. The on a broad military plan to Straits often became the final leg of the Middle protect and control this viPassage as was the case for the smuggled Af- tal shipping lane and built ricans aboard the schooner Amistad. In 1839 fortresses at Key West and the captives arrived in Havana aboard the the D ry Tortugas. In 1829, slave ship Tecora, years after the international Lt. Josai Tatnall said, &#39;&#39;A na&quot;The Gulf Stream&quot; by Winslow Homer slave trade had been abolished. The smug- val force to control the Gulf gled Africans were purchased at a H avana could desire no better position than Tortu- of the Panama Canal in 19 14, the Straits of marker and put aboard rhe coasting schooner gas.&quot; By 1846 when the construction of Fort Florida&#39;s military importance increased still Amistad, which sailed east in the Straits until Jefferson began on the Dry Tortugas, the further. Vessels bound for the West Coast of the United States the captives revolted. At the cut their trip dramatitime of the Amistad, Cuba cally, and vessels bound USS Maine entering Havana harbor in January 1898. was importing over 10,000 for the Far East now illegal Africans annually to ~i turned west through slave on sugar plantations, ~&#39;°&quot;&#39;&quot;&quot;.:..-:~ ~ the Straits of Florida to most traveling on the Straits · ~ go through the Panama of Florida. § Canal. With the CaGIBRALTAR OF 1HE WFST ~ nal, American warships American vessels sailed the ~ could now steam beStraits and called on Cuban ~ tween the Atlantic and pons for sugar and a variety &#39;---..;;;..-~-------.;...__ _ _..;....__ _ _ _ _ _ ___:_;__&quot;&#39;&quot;-&#39;&quot;..;...._..:....:..----.J g the Pacific with greater of other goods-products speed. Dming World such as coffee, cocoa, and fruir. New England US held all the territories around the Mis- War II, Americans patrolled the Straits for fishermen came to the area in winter to fish. sissippi and had long been trading through German submarines. Since the 1960s, miliThe Straits of Florida is a haven for both big the Straits from this crucial inland river. The tary tensions with Cuba, notably the Bay of game fish and schools of food fish because the country had vo ted Texas into the Union, just Pigs Invasion and the Cuban Missile Crisis, acquired California, and was implementing a have added still more military tension. Fort Jefferson in the Dry Tortugas plan to build a railway across Central AmeriTHE ARTISTS ca. In January of 1898, the USS Maine, part of the US Navy&#39;s new fleet of bartleships, The climate, the wealth, the diversity of culcrossed the Straits from the harbor at the Dry tures, and even the fishing of the Straits of Tortugas. She anchored in Havana Harbor, Florida have attracted an extraordinary colwhere she exploded on 15 February, killing lection of writers and poets. Robert Louis 266 men . The US government blamed the Stevenson, James Fenimore Cooper, and blast on Spanish forces and subsequently Stephen Crane all wrote of the Straits, depushed the Spanish out of the Caribbean re- scribing piracy, shipwreck, and the wrecking gion by the end of the year. W ith completion business. Poets Elizabeth Bishop, John Dos

8 Schooner Sultana: Building an Eighteenth-Century Reproduction for the Twenty-First Century, by Drew McMullen • 12 Historic Ships on a Lee Shore, by Jack Willard, James Kirk and John Kochiss, and William S. Dudley • 16 Forbidden to Sail: Steamship Portland, 1890-1898, by Deborah Marx • 19 Lost and Found: The Search for the Portland, by Matthew Lawrence • 22 The Maritime History of the Straits of Florida: Where Oceanography Makes History, by Richard J. King • 30 Santa Barbara Maritime Museum, by Betsy Crowfoot • 33 Maritime History on the Internet: Whaling Before the Twentieth Century, by Peter McCracken •