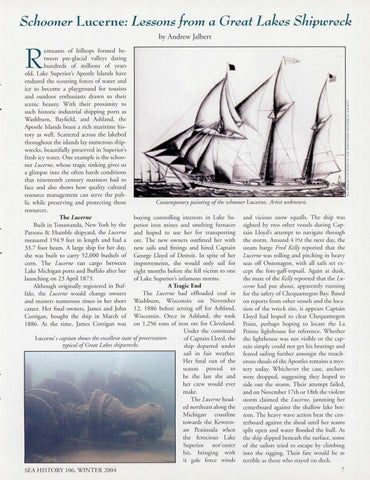 emnants of hilltops formed between pre-glacial valleys daring hundreds of millions of years old, Lake Superior&#39;s Aposrle Islands have endured rhe scouring forces of water and ice to become a playground for tourists and outdoor enthusias ts drawn to their scenic beauty. With their proximi ty to such historic industrial shipping ports as Washburn, Bayfield, and Ashland, the Apostle Islands boast a rich maritime history as well. Scattered across the lakebed throughout the islands lay numerous shipwrecks, beautifully preserved in Superior&#39;s fresh icy water. One example is the schooner L ucerne, whose tragic sinking gives us a glimpse into the often harsh conditions that nineteenth cenrury mariners had to face and also shows how quality cultural resource managem enr can serve rhe public while preserving and prorecring those resources. The Lucerne Builr in Tonawanda, N ew York by the Parsons &amp; Humble shipyard, the L ucerne measured 194.9 feer in length and had a 33 .7 foor beam. A large ship for her day, she was builr to carry 52,000 bushels of corn. The L ucerne ran cargo between Lake Mi chigan ports and Buffalo after her launching on 23 April 1873. Although originally registered in Buffalo , the L ucerne would change owners and masters numerous rimes in her shorr career. H er final owners, James and John C orrigan, bought the ship in M arch of 1886. At the rime, James C orrigan was

buying controlling inrerests in Lake Superior iron mines and smelting furn aces and hoped to use her fo r rrans porring ore. The new owners outfitted her wirh new sails and fittin gs and hired Captain George Lloyd of D etroit. In spite of her improvements, she wo uld only sail fo r eight monrhs before she fell victim to one of Lake Superior&#39;s in famous storms. A Tragic End T he L ucerne had offloaded coal m Was hburn, Wisconsin on November 12, 1886 befo re setting off fo r As hland, Wisconsin . Once in As hland, she took on 1,256 to ns of iron ore fo r C leveland. U nder th e command Lucerne&#39;s capstan shows the excellent state of preservation of Captain Lloyd, rhe typical of Great Lakes shipwrecks. ship departed under sail in fair weather. H er final run of the seaso n proved to be the las t she and her crew wo uld ever make. T he Lucerne headed northeas t along the Michigan coas tline towards the Keweenaw Peninsula when rhe ferocious Lake Superior nor&#39; easter hir, bringing wirh ir gale fo rce winds

and vicious snow squalls. T he ship was sighted by two orher vessels during Captain Lloyd&#39;s artemp r to navigate rhro ugh rhe storm. Aro und 4 PM th e nexr day, the steam barge Fred Kelly reported that the Lucerne was rolling and pi tching in heavy seas off O nto nago n, with all sails set except the fo re-gaff-topsail. Again at dusk, th e mate of the Kelly re ported that the Lucerne had pur about, apparenrl y running fo r the safety of Chequamego n Bay. Based on reports fro m orher vessels and the locati on of the wreck site, it appears Captain Lloyd had hoped to clear Chequamegon Point, perhaps hoping to locate the La Pointe lighthouse fo r reference. Whether the lighthouse was no t visible or the captain simply could not get his bearings and feared sailing further amongst the treacherous shoals of the Apostles remains a mystery today. W hichever the case, anchors were dropped, suggesting they hoped to ride out the storm. T heir attempt failed, and on November 17th or 18 th the violent storm claimed the Lucerne, jamming her centerboard against the shallow lake bottom. T he heavy wave action beat the centerboard against the shoal until her seams split open and water flood ed the hull . As the ship slipped benea th the surface, some of the sailors tried to escape by climbing into the rigging. Their fa te wo uld be as terrible as those who stayed on deck. 7