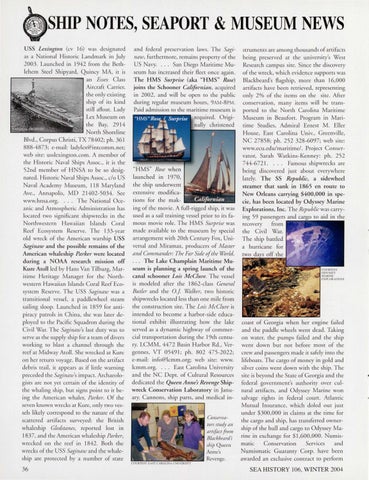 @&gt;sHIP NOTES, SEAPORT &amp; MUSEUM NEWS USS Lexington (cv 16) was designated as a National Historic Landmark in Jul y 2003. Launched in 1942 from the Bethlehem Steel Shipyard, Quincy MA, it is an Essex C lass Ai rcrafr Carrier, the on ly existing sh ip of its kind still afloat. Lady Lex Museum on the Bay, 2914 North Shoreline Blvd., Corpus C hristi, TX 78402; ph. 361 888-4873; e-mail: ladylex@intcomm. net; web sire: usslexington.com . A member of the Historic Naval Ships Assoc., it is the 52 nd member of HNSA to be so designated. Historic Naval Ships Assoc., clo US Nava l Academy Museum, 118 Maryland Ave., Annapolis, MD 2 1402-5034. See www.hnsa.org. . . . T he Natio nal Ocean ic and Atmospheric Administration has located two significant shipwrecks in the Northwestern Hawaiian Islands Coral Reef Ecosystem Reserve. The 133-year old wreck of the American wars hip USS Saginaw and the possible remains of the American whaleship Parker were located during a NOAA research mission off Kure Atoll led by Hans Van Tilburg, Maririme H eritage Manager for the Northwestern H awaiian Islands Coral Reef Ecosystem Reserve. The USS Saginaw was a transitional vessel, a paddlewheel steam sailing sloop. Launched in 1859 for anripiracy patrols in C hina, she was later deployed to the Pacific Squadron during the Civil War. T he Saginaw&#39;s last dury was to serve as the supply ship for a ream of divers working to blast a chan nel through the reef at Midway Atoll. She wrecked at Kure on her return voyage. Based on the arti fac t debris trail , it appears as if little warning preceded the Saginaw&#39;s impact. Archaeo logists are not yet certain of the identi ry of the whaling ship, but signs point to it being the American whaler, Parker. Of the seven known wrecks at Kure, only two vessels likely correspond to the nature of the scattered artifacts surveyed: the British whaleship Gledstanes, reported lost in 1837, and the American whaleship Parker, wrecked on the reef in 1842. Both rhe wrecks of the USS Saginaw and the whaleship are protected by a number of stare

and federal preservatio n laws. The Saginaw, furthermore, remai ns properry of rhe US Navy. . . . San Diego Maritime Museum has increased their fleer once again. The HMS Surprise (aka &quot;HMS&quot; Rose) joins the Schooner Californian, acquired in 2002, and will be open to the p ublic during regular museum hours, 9AM-8PM. Paid admission to the maritime museum is required. Originally christened

launched in 1970, the ship underwenr extensive modifications for the making of the movie. A full-rigged ship, it was used as a sail training vessel prior to its famous movie role. The HMS Surprise was made available to the museum by special arrangement with 20 th Century Fox, Universal and Miramax, producers of Master

struments are among thousands of artifacts being preserved at the universiry&#39;s West Research campus sire. Since the discovery of rhe wreck, which evidence supporrs was Blackbeard&#39;s flagship, more than 16,000 artifacts have been retrieved, representing only 2% of the items on the sire. After conservation, many items will be transported to the orth Carolina Maritime Museum in Beaufort. Program in Maritime Studies, Admiral Ernest M. Eller House, East Carolina Univ. , Greenvi lle, NC 27858; ph . 252 328-6097; web sire: www.ecu.edu/maririme/. Project Co nservator, Sarah Watkins-Kenney: ph. 252 744-672 1. . . . Famous shipwrecks are bei ng discovered just about everywhere lately. The SS Republic, a sidewheel steamer that sank in 1865 en route to New Orleans carrying $400,000 in specie, has been located by Odyssey Marine Explorations, Inc. T he Republic was carrying 59 passengers and cargo to aid in the recovery from the C ivil War. The ship barded a hurricane for two da s off the

coast of Georgia when her engin e failed and the paddle wheels went dead. Taking on water, the pumps failed and the ship went down but nor before most of the crew and passengers made it safely into the lifeboats. The cargo of money in gold and silver coins went down wi th the ship. The sire is beyo nd the State of Georgia and the federal government&#39;s aurhoriry over cultural artifacts, and Odyssey M arine won salvage rights in federal court. Atlantic M utual Insurance, which doled our just under $300,000 in claims at the time for the cargo and ship, has transferred ownership of the hull and cargo to Odyssey Marine in exchange for $1,600,000. N umismatic Co nservati on Servi ces and Numismatic Guaranry Corp. have been awarded an exclusive co ntract to perform