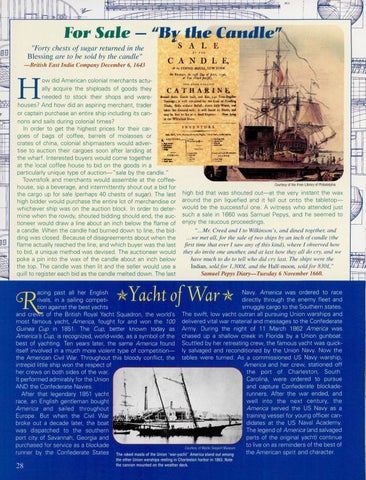 For Sale &quot;Forty chests of sugar returned in the Blessing are to be sold by the candle&quot; -British East India Company December 6, I 643

On ·Faio&quot;:i, ~: i ~f&#39;1;,~G~LY, 1;¢. 0 ow did American colonial merchants actually acquire the shiploads of goods they CATHA .&#39;RJ .N~ Round Slttn, Dutch built, ~ £roe. _140 Tons .Jt.:giftcr needed to stock their shops and wareTonnage ; is w&lt;:ll cakulaltd ·br the Cc.I « ·COaninc Tndt:, fhiru without BalWl, drn&#39;S lit!-!c Wiii«, . and houses? And how did an aspiring merchant, trader takes the -Ground.wdl ; is wdl fOund in Stores. mf or captain purchase an entire ship including its canmay be knt to Sea at a limll Expcncc. Now lyiag al the Whitehall Stairs. nons and sails during co lonial times? I NV ENT 0 RY. In order to get the highest prices for their cargoes of bags of coffee, barrels of molasses or L AN,c11oas..,._ 1;.:..,&quot;1:,,.,...;,. crates of china, colonial shipmasters would adverSA I LS. tise to auction their cargoes soon after landing at CA IL ES. r-c..1 1•.,. . .. .... the wharf. Interested buyers would come together .• ..,.c..i ..... at the local coffee house to bid on the goods in a particularly unique type of auction-&quot; sale by the candle .&quot; Townsfolk and merchants wou ld assemble at the coffeeCourtesy of the Free Library of Philadelphia house, sip a beverage, and intermittently shout out a bid for high bid that was shouted outat the very instant the wax the cargo up for sale (perhaps 40 chests of sugar) . The last around the pin liquefied and it fell out onto t he tabletophigh bidder would purchase the entire lot of merchandise or whichever ship was on the auction block . In order to deter- would be the successful one. A witness who attended just mine when the rowdy, shouted bidding should end, the auc- such a sale in 1660 was Samuel Pepys, and he seemed to tioneer wou ld draw a line about an inch below the flame of enjoy the raucous proceedings . &quot; ... Mr. Creed and I to Wilkinson &#39;s, and dined together, and a candle . When the candle had burned down to line, the bid.. .we met all,for the sale of two ships by an inch of candle (the ding was closed . Because of disagreements about when the flame actually reached the line, and which buyer was the last first time that ever I saw any of this kind), where I observed how to bid, a unique method was devised . The auctioneer would they do invite one another, and at last how they all do c1y, and we have much to do to tell who did cry last. The ships were the poke a pin into the wax of the candle about an inch below Indian, sold for 1,300£, and the Half-moon, sold fo r 830£.&quot; the top. The candle was then lit and the sel ler wou ld use a Samuel Pepys Diary-Tuesday 6November1660. quill to register each bid as the candle melted down. The last