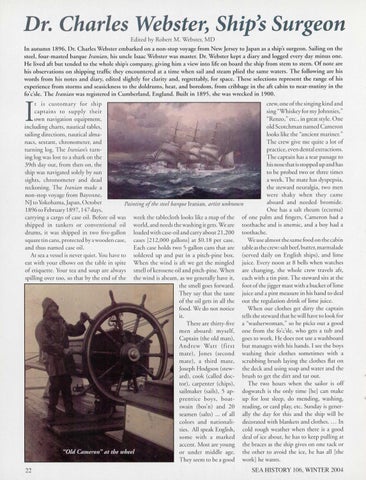 Dr. Charles Webster, Ship&#39;s Surgeon Edited by Roberr M. Webster, MD In autumn 1896, Dr. Charles Webster embarked on a non-stop voyage from New Jersey to Japan as a ship&#39;s surgeon. Sailing on the steel, four-masted barque Iranian, his uncle Isaac Webster was master. Dr. Webster kept a diary and logged every day minus one. He lived aft but tended to the whole ship&#39;s company, giving him a view into life on board the ship from stem to stern. Of note are his observations on shipping traffic they encountered at a time when sail and steam plied the same waters. The following are his words from his notes and diary, edited slightly for clarity and, regrettably, for space. These selections represent the range of his experience from storms and seasickness to the doldrums, heat, and boredom, from cribbage in the aft cabin to near-mutiny in the fo&#39;c&#39;sle. The Iranian was registered in Cumberland, England. Built in 1895, she was wrecked in 1900. t is customary fo r sh ip crew,oneofthesingingkindand caprains to supp ly their sing &quot;Whiskeyfo rm yJo hnnies,&quot; own navigation equipment, &quot;Renzo,&quot; etc., in great style. One including charts, nautical tables, old Scotchman nam ed Cameron sailing directions, nautical almalooks like the &quot;ancient mariner. &quot; nacs, sextant, chronometer, and The crew give m e quite a lot of turning log. T he Iranian&#39;s turnpractice, even dental extractions. ing log was lost to a shark on the The captain has a tear passage to 39th day out, from then on, the his nose thatisstopped up and has ship was navigated solely by sun to be probed two or three times sights, chronometer and dead a week. The m ate has dyspepsia, reckoning. The Iranian m ade a the steward neuralgia, two men non-stop voyage from Bayonne, were shaky when they cam e NJ to Yokohama, Japan , October Painting ofthe steel barque Iranian, artist unknown aboard and needed bromide. 1896toFebruaryl897, 147days, One has a salt rheum (eczema) carrying a cargo of case oil. Before oil was week the tablecloth looks like a map of the of o ne palm and fin gers, Cam ero n had a shipped in tankers or conventional oil world, and needs the was hing it gets. We are toothache and is anemic, and a boy had a drums, it was shipped in two five-gallon loaded wi th case-oil and carry about 2 1,200 toothache. square tin cans, protected bya wooden case, cases [2 12,000 gallons] at $0. 18 per case. We use almost the same food on the cab in and thus named case oil. Each case holds two 5-gallon cans that are table as the crew: salt beef, butter, marmalade At sea a vessel is never quiet. You have to soldered up and put in a pitch-pine box. (served daily on English ships), and lime eat with your elbows on the table in spite When the w ind is aft we get the mingled juice. Every noon at 8 bells when watches of etiquette. Your tea and so up are always smell of kerosene oil and pitch-pine. When are changin g, the whole crew travels aft, spi lling over too, so that by the end of the the wind is abeam, as we generally have it, each with a tin pint. The steward sits at the the smel l goes forward. foot of the jigger mast with a bucket oflim e They say that the taste juice and a pint measure in his hand to deal of the oil gets in all the out the regulation drink of lime juice. food. We do not notice W hen our clothes get dirty the captain it. tells the steward that he will have to look for There are thirty-five a &quot;washerwo man,&quot; so he picks out a good m en aboard: myself, one from the fo&#39;c&#39;sle, who gets a tub and Captai n (the old man) , goes to work. He does not use a washboard Andrew Watt (fir s t but manages wi th his hands. I see the boys m ate), Jones (second was hing their clothes sometimes with a m ate), a third mate, scrubbing brush laying the clothes flat on Joseph Hodgson (stew- the deck and using soap and water and the ard), cook (called doc- brush to get the dirt and tar out. T he two hours when the sailor is off tor), carpenter (chips), sailmaker (sails), 5 ap- dogwatch is the only time [he] can make prentice boys, bo at- up for lost sleep, do mending, washing, swain (bos&#39;n) and 20 reading, or card play, etc. Sunday is generseamen (salts) ... of all ally the day for this and the ship will be co lors and nationali- decorated with blankets and clothes .... In ties. All speak English, cold rough weather when there is a good some w ith a m arked deal of ice about, he has to keep pulling at accent. Most are yo ung the braces as the ship gives on one tack o r the other to avo id the ice, he has all [the or under middl e age. They seem to be a good work] he wants.