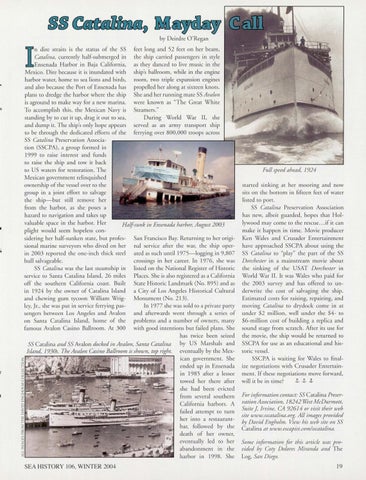 n dire straits is the status of the SS feet long and 52 feet on her beam, Catalina, currently half-s ubmerged in the ship carried passe ngers in style Ensenada H arbor in Baja Califo rnia, as they danced to live music in the Mexico. Dire because it is inundated with ship&#39;s ballroom, while in the engine harbor water, home to sea lions and birds, room, two triple expansion engines and also because the Port of Ensenada has propelled her along at sixteen knots. plans to dredge the harbor where the ship She and her running mate SS Avalon is aground to make way for a new marina. were known as &quot;The Great White To accomplish this, the Mexican Navy is Steamers.&quot; During World War II, she standing by to cut it up, drag it out to sea, and dump it. T he ship&#39;s only hope appears served as an army transport ship to be through the dedicated efforts of the ferrying over 800,000 troops across SS Catalina Preservation Association (SSCPA), a gro up formed in 1999 to raise interest and funds to raise the ship and row it back to US waters for restoration. T he Mexican government relinquished ownership of the vessel over to the group in a joint effo rt to salvage the ship-but still remove her from the harbor, as she poses a hazard to navigation and takes up valuable space in the harbor. H er Half sunk in Ensenada harbor, August 2003 plight would seem hopeless co nsidering her half-sunken state, but profes- San Francisco Bay. Returning ro her origisional marin e surveyors who dived on her nal service after the war, the ship operin 2003 reported the one-inch thick steel ated as such until 1975-logging in 9,807 crossings in her career. In 1976, she was hull salvageable. SS Catalina was the last steamship in listed on the National Register of Historic service to Santa Catalin a Island, 26 miles Places. She is also registered as a Cali fo rnia off the southern Cal iforni a coast. Built State Historic Landmark (No. 895) and as in 1924 by the owner of Catalina Island a City of Los Angeles Historical C ultural and chewing gum tycoo n William Wrig- Monument (No. 213). ley, Jr., she was put in service ferrying pasIn 1977 she was sold to a private party sengers between Los Angeles and Avalon and afterwards we nt th ro ugh a series of on Sama Catalina Island, home of the problems and a number of owners, many famous Avalon Casino Ballroom. At 300 with good intentions but failed plans. She has twice been seized by US Marshals and SS Catalina and SS Avalo n docked in Avalon, Santa Catalina Island, 1930s. The Avalon Casino Ballroom is shown, top right. even tually by the Mexican government. She ended up in Ensenada in 1985 after a lessee towed her there after she had been evicted from several southern California harbors. A failed attempt to turn her into a restaurantbar, followed by the death of her owner, eventually led to her abandonment in the harbor in 1998. She

started sinking at her mooring and now sits on the bottom in fifteen feet of water listed to port. SS Catalina Preservation Association has new, albeit guarded, hopes that Hollywood may come to the rescue ... if it can make it happen in time. Movie producer Ken Wales and C rusader Entertainment have approached SSCPA about using the SS Catalina to &quot;play&quot; the part of the SS Dorchester in a mainstream movie about the sinking of the USAT Dorchester in World War II. It was Wales who paid for the 2003 survey and has offered to underwrite the cost of salvaging the ship. Estimated costs for raising, repairing, and moving Catalina to drydock come in at under $2 million, well under the $4- to $6-million cost of building a replica and sound stage from scratch. After its use for the movie, the ship would be returned to SSCPA for use as an educational and historic vessel. SSCPA is waiting for Wales to final ize negotiations with C rusader Entertainment. If these nego tiations move forward, 1.. 1.. 1.. will it be in time? For information contact: SS Ca talin a Preservation Association, 18242 West McDurmott, Suite j, Irvine, CA 92614 or visit their web site www.sscatalina.org. All images provided by David Engholm. View his web site on SS Catalina at www. escapist. comlsscatalina. Some information for this article was provided by Coty Dolores Miranda and The Log, San Diego.