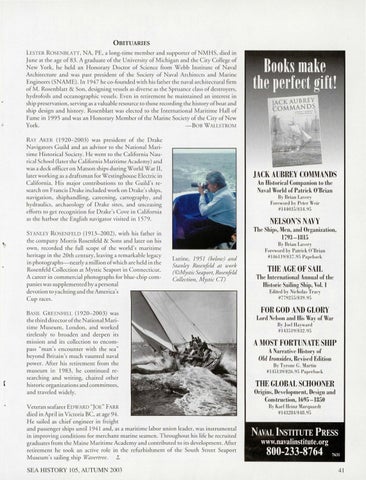 OBITUARIES LESTER ROSENBLATT, NA, PE, a long-rime member and supporter ofNMHS, died in ] une at rhe age of 83. A graduate of the University of Michigan and the City College of New York, he held an Honorary Doctor of Science from Webb Institute of Naval Architecture and was past president of the Society of Naval Architects and Marine Engineers (SNAME). In 1947 he co-fo unded with his father the naval architectural firm ofM. Rosenblarr &amp; Son, des igning vessels as diverse as the Spruance class of destroyers, hydrofoi ls and oceanographic vessels. Even in retirement he maintained an interest in ship preservation , serving as a valuable resource ro those recording the hisro ry of boat and ship design and hisrory. Rosenblarr was elected ro the International Maritime Hall of Fame in 1995 and was an Honorary Member of the Marine Society of the C ity of New York. -BOB WALLSTROM RAY AKER (1920-2003) was presid ent of the Drake Navigarors Guild and an advisor ro the National Maritime Hisrorical Society. He went ro the Cali fornia Nautica l Schoo l (la ter the California Maritime Academy) and was a deck officer on Marson ships during World War II, later working as a draftsman for Westinghouse Electric in Cal ifornia. His major contributions ro the G uild&#39;s research on Francis Drake included work on Drake&#39;s ships, navigation, shiphandling, careening, ca rrograp hy, and hydraulics, archaeology of Drake sites, and unceasing efforrs ro ge t recognition for Drake&#39;s Cove in California as the harbor the English navigaror visited in 1579. STANLEY ROSENFE LD (1913-2002) , with his fathe r in the company Morris Rosenfeld &amp; Sons and later on his own, recorded the full scope of the world&#39;s maritime heritage in th e 20th century, leaving a remarkable legacy in phorographs-nearlya million of which are held in the Rosenfeld Collection at Mystic Seaport in Con necticut. A career in co mmercial phorographs for blue-chip co mpani es was supplemented by a personal devotion royachringand theAmerica&#39;s Cup races.

JACK AUBREY COMMANDS An Historical Companion to the Naval World of Patrick O&#39;Brian By Brian Lavery Foreword by Peter Weir #144035/$34. 95

BAS IL GREENH ILL (1920-2003) was the third direcrorof the National Maritime Museum, London, and worked tireless ly ro broaden and deepen its mission and its collection ro encompass &quot;man&#39;s encounter with the sea&quot; beyond Britain&#39;s much vaunted naval power. After his retirement from the museum in 1983, he continued researching and writing, chaired other hisroric organizations and committees, and traveled widely. Veteran seafarer EDWARD &quot;JOE&quot; FARR died in April in Vicroria BC, at age 94. H e sailed as chief engineer in freight and passenge r ships until 194 1 and, as a maritim e labor union leader, was instrumental in improving co nditions for merchant marine seamen. Throughout his life he recruited graduates from the Maine Maritime Academy and contributed ro its development. After retirement he rook an active role in the refurbishment of the South Street Seaport Museum&#39;s sailing ship Wavertree. ,!, SEA HISTORY 105 , AUTUMN 2003