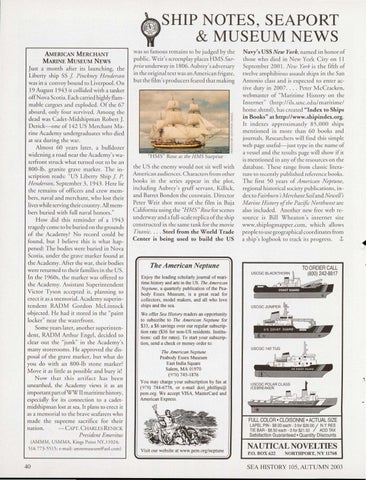 6SHIP NOTES, SEAPORT T &amp; MUSEUM NEWS AMERICAN MERCHANT MARINE MUSEUM NEWS Jusr a month after its launching, the Liberty ship SS ]. Pinckney Henderson was in a convoy bound ro Liverpool. On 19 August 1943 it collided with a ranker offNova Scotia. Each carried highly flammable cargoes and exploded. Of the 67 aboard, only four survived. Among rhe dead was Cader-Midshipman Robert]. Derick-one of 142 US Merchant Marine Academy undergraduates who died at sea during the war. Almost 60 years later, a bulldozer widening a road near the Academy&#39;s waterfront struck what turned our robe an 800-lb. granite grave marker. The inscription reads: &quot;US Liberty Ship]. P. Henderson, September 3, 1943 . Here lie the remains of officers and crew members, naval and merchant, who lost their lives while serving their country. All members buried with full naval honors.&quot; How did this reminder of a 1943 tragedy come robe buried on the grounds of the Academy? No record could be found, bur I believe this is what happened: The bodies were buried in Nova Scotia, under the grave marker found at the Academy. After rhe war, their bodies were returned ro their families in rhe US. In rhe 1960s, the marker was offered ro the Academy. Assistant Superintendent Vicror Tyson accepted it, planning ro erect it as a memorial. Academy superintendent RADM Gordon McLinrock objected. He had it srored in the &quot;paint locker&quot; near the waterfront. Some years later, another superintendent, RADM Arthur Engel, decided ro clear our the &quot;junk&quot; in the Academy&#39;s many srorerooms. He approved the disposal of the grave marker, bur what do you do with an 800-lb srone marker? Move it as little as possible and bury it! Now that this artifact has been unearthed, the Academy views it as an imporranrparrofWWII maritimehisrory, especially for its connection ro a cadetmidshipman lost at sea. Ir plans to erect it as a memorial ro the brave seafarers who made the supreme sacrifice for their nanon. -CAPT. CHARLES RE ICK President Emeritus (AMMM, USMMA , Kings Poim NY, 11024; 5 1G 773-55 15; e- mail: ammmuse um@aol. com)

&quot;HMS&quot; Rose tis the HMS Surprise the US the enemy would nor sir well with American audiences. Characters from other books in the series appear in the plot, including Aubrey&#39;s gruff servant, Killick, and Barrer Bonden the coxswain. Direcror Peter Weir shot most of the film in Baja California using the &quot;HMS&quot; Rose for scenes underway and a full-scale replica of rhe ship constructed in the same rank for the movie Titanic . ... Steel from the World Trade Center is being used to build the US

Navy&#39;s VSSNew York, named in honor of those who died in New York City on 11 September 2001. New York is the fifth of twelve amphibious assault ships in the San Anronio class and is expected to enter active dury in 2007 .... Peter McCracken, webmasrer of &quot;Ma ritime History on rhe Internet&quot; (http: // ils.unc.edu/maririm e/ home.shrml), has created &quot;Index to Ships in Books&quot; at http://www.shipindex.org. It indexes approximately 85,000 sh ips mentioned in more than 60 books and journals. Researchers will find this simple web page useful-just type in the name of a vessel and the results page will show if it is mentioned in any of the reso urces on the database. These range from classic literature to recently published reference books. The first 50 years of American Neptune, regional hisrorical society publications, index ro Fairburn s Merchant Sail and Newells Marine History ofthe Pacific Northwest are also included. Another new free web resource is Bill Whearon&#39;s internet sire www.shiplogmapper.com, which all ows people rouse geographical coordi n.ares from a ship &#39;s logbook to track its progress. -1

The American Neptune Enjoy the leading scholarly journal of maritime history and arts in the US. The American Neptune, a quarterly publication of the Peabody Essex Muse um, is a great read for collectors, model makers, and all who love ships and the sea. We offer Sea History readers an opportunity to subscribe to The American Neptune for $33 , a $6 savings over our regular subscription rate ($36 for non-US residents. Institutions: call for rates). To start your subscription, send a check or money order to :