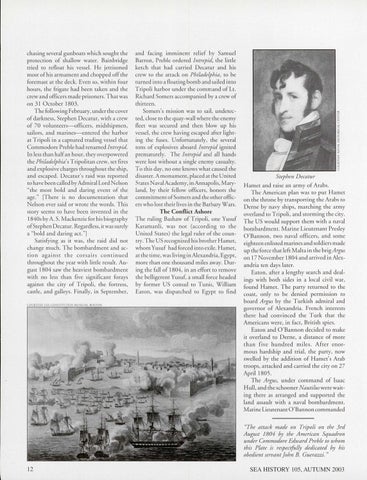 chasing several gunboats which sought the protection of shallow water. Bainbridge tried to refloat hi s vessel. He jettiso ned most of his armament and chopped off the foremast at the deck. Even so, within four hours, the frigate had been taken and the crew and officers made prisoners. T hat was on 3 1October1803. The following February, under the cover of darkness, Stephen Decatur, with a crew of 70 vo lunteers-offi cers, midshipmen , sailors, and marin es-entered the harbor at Tripoli in a captured trading vessel that Commodore Prebl e had renamed Intrep id. In less than halfan hour, th ey overpowered the Philadelphia&#39;s Tripolitan crew, set fires and explosive charges throughout the ship , and escaped. D ecatur&#39;s raid was reported to have been called by Admiral Lord Nelso n &quot;the most bold and daring event of the age.&quot; [There is no documentation that Nelson ever said or wrote the wo rds. This story seems to have been invented in the 1840s by A. S. Mackenzie for his biography ofStephen D ecatur. Regardless, it was surely a &quot;bold and daring act. &quot;] Satisfying as it was, the raid did not change much. The bombardment and acti o n aga in st the co rsa irs co ntinu ed throughou t the year with little result. August 1804 saw the heaviest bombardment with no less than five significant forays against the ciry of Tripoli, the fortress, castle, and galleys. Finally, in September, COURT ESY USS CONSTITUTION MUS EUM, BOSTO N

and facing imminent relief by Samuel Barron, Preble ordered Intrepid, the little ketch that had carried Decatur and his crew to the attack on Philadelphia, to be turned into a fl oati ng bomb and sa iled into Tripoli harbor under the command of Lt. Richard Somers acco mpanied by a crew of thirteen . So mers&#39;s mission was to sail, undetected, close to the quay-wall where the enemy fleet was secured and then blow up his vessel, the crew having escaped after lighting the fuses . Unfortunately, the several tons of exp los ives aboard Intrepid ignited prematurely. The Intrepid and all hands were lost without a single enemy casual ty. To this day, no one knows what caused the disaster. A monument, placed at the U ni ted States Naval Academy, in Annapol is, Ma1yland, by their fellow officers, honors the co mmitment of So mers and the other officers who lost their lives in the Barbary Wars.

The Conflict Ashore T he ruling Bashaw of Tripoli, o ne Yusuf Karamanli , was not (according to the United States) the legal ruler of the co untry. T he US recognized his brother Hamer, whom Yusuf had forced in to exile. Hamer, at the time, was living in Alexandria, Egypt, more than one thousand miles away. During the fall of 1804, in an effo rt to remove the belligerent Yus uf, a small force headed by former US consul to T unis, William Eaton, was dispatched to Egypt to find

Stephen D ecatur H amer and rai se an army of Arabs. The American p lan was to put H amet on the thron e by transporting the Arabs to Derne by navy ships, marching the army overland to Tripoli, and storming the city. T he US would support them with a naval bombardm ent. Marine Lieutenant Presley O &#39;Bannon, two naval officers, and some eighteen enlisted marines and sold iers made up the force that left M alta in the brigA rgus on 17 November 1804 and arrived in Alexandria ten days later. Eato n, after a lengthy search and dealin gs with both sides in a local civil war, found Hamet. The party returned to the coast, on ly to be denied permission to board Argus by th e Turkish admiral and governor of Alexandria. French interests th ere had convinced the Turk that the Americans were, in fac t, British spies. Eaton and O&#39;Bannon decided to make it overland to Derne, a distance of more than five hundred mi les. After enormous hardship and trial, the parry, now swelled by the addition of H amet&#39;s Arab troops, attacked and carried the city on 27 Apri l 1805 . The Argus, under command of Isaac Hull, and the schooner Nautilus were waiting there as arranged and supported the land assault with a naval bombardment. Marine Lieutenant O&#39;Bannon co mmanded

&quot;The attack made on Tripoli on the 3rd August 1804 by the American Squadron under Commodore Edward Preble to whom this Plate is respectfally dedicated by his obedient servant Joh n B. Guerazzi. &quot; 12