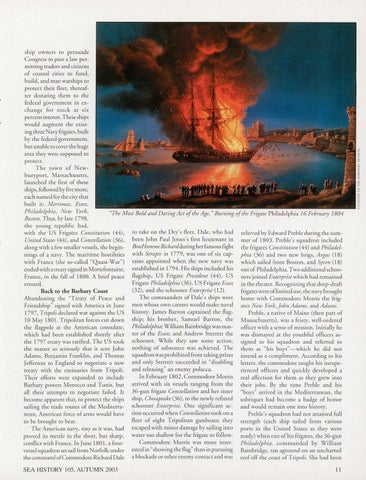 ship owners to persuade Congress to pass a law permitting traders and citizens of coastal cities to fund, build, and man warships to protect their fleet, thereafter donating them to the federal government in exchange for stock at six percent interest. These ships would augment the existingthreeNavyfrigates, built by the federal government, but unable to cover the huge area they were supposed to protect. The town of Newburyport, Massachusetts, launched the first of these ships, followed by five more, each named for the city that built it: Merrimac, Essex,

the young republic had, with the US Frigates Constitution (44), United States (44), and Constellation (36), along with a few smaller vessels, the beginnings of a navy. The maritime hostilities with France (the so-called &quot;Quasi-War&quot;) ended with a treaty signed in Mortefon taine, France, in the fall of 1800. A brief peace ensued. Back to the Barbary Coast Abandoning the &quot;Treaty of Peace and Friendship&quot; signed with America in June 1797, Tripoli declared war against the US 10 May 1801. Tripolitan forces cut down the flagpole at the American consulate, which had been established shortly after the 1797 treaty was ratified. The US took the matter so seriously that it sent John Adams, Benjamin Franklin, and Thomas Jefferson to England to negotiate a new treaty with the emissaries from Tripoli. Their efforts were expanded to include Barbary powers Morocco and Tunis, but all their attempts to negotiate failed. It become apparent that, to protect the ships sailing the trade routes of the Mediterranean, American force of arms would have to be brought to bear. The American navy, tiny as it was, had proved its mettle in the short, but sharp, conflict with F ranee. In June 1801, a fourvessel squadron set sail from Norfolk under the command of Commodore Richard Dale SEA HISTORY 105, AUTUMN 2003

to take on the Dey&#39; s fleet. Dale, who had been John Paul Jones&#39;s first lieutenant in BonHomme Richardduring her famous fight with Serapis in 1779, was one of six captains appointed when the new navy was established in 1794. His ships included his flagship, US Frigate President (44), US Frigate Philadelphia (36), US Frigate Essex (32), and the schooner Enterprise (12). The commanders of Dale&#39;s ships were men whose own careers would make naval history. James Barron captained the flagship; hi s brother, Samuel Barron, the Philadelphia; William Bainbridge was master of the Essex; and Andrew Sterrett the schooner. While they saw some action, nothing of substance was achieved. The squadron was prohibited from taking prizes and only Sterrett succeeded in &quot;disabling and releasing&quot; an enemy polacca. In February 1802, Commodore Morris arrived with six vessels ranging from the 36-gun frigate Constellation and her sister ship, Chesapeake (36), to the newly refitted schooner Enterprise. One significant action occurred when Constellation took on a fleet of eight Tripolitan gunboats; they escaped with minor damage by sailing into water too shallow for the frigate to follow. Commodore Morris was more interested in &quot;showing the flag&quot; than in pursuing a blockade or other enemy contact and was

relieved by Edward Preble during the summer of 1803. Preble&#39;s squadron included the frigates Constitution (44) and Philadelphia (36) and two new brigs, Argus (18) which sailed from Boston, and Syren (18) ourof Philadelphia. Two additional schooners joined Enterprise which had remained in the theater. Recognizing that deep-draft frigates were oflimi ted use, the navy brought home with Commodore Morris the frigates New York, john Adams, and Adams. Preble, a native of Maine (then part of Massachusem), was a feisty, well-ordered officer with a sense of mission. Initially he was dismayed at the youthful officers assigned to his squadron and referred to them as &quot;his boys&quot;-which he did not intend as a compliment. According to his letters, the commodore taught his inexperienced officers and quickly developed a real affection for them as they grew into their jobs. By the time Preble and his &quot;boys&quot; arrived in the Mediterranean, the sobriquet had become a badge of honor and would remain one into history. Preble&#39;s squadron had not attained full strength (each ship sailed from various ports in the United States as they were ready) when one of his frigates, the 36-gun Philadelphia, commanded by William Bainbridge, ran aground on an uncharted reef off the coast of Tripo li . She had been