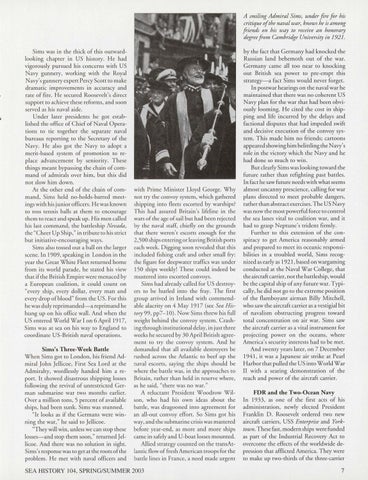 A smiling Admiral Sims, under fire for his critique ofthe naval war, knows he is among friends on his way to receive an honorary degree from Cam bridge University in 1921. Sims was in the thick of this outwardlooking chapter in US history. He had vigorously pursued his concerns with US Navy gunnery, working with the Royal Navy&#39;s gunnery expert Percy Scott to make dramatic improvements in accuracy and rate of fire. He secured Roosevelt&#39;s direct support to achieve these reforms, and soon served as his naval aide. Under later presidents h e got established the office of Chief of Naval Operations to tie together the separate naval bureaus reporting to the Secretary of the Navy. He also got the Navy to adopt a merit-based system of promotion to replace advancement by seniority. T hese things meant bypassing the chain of command of admirals over him , but this did not slow him down . At the other end of the chain of command, Sims held no-holds-barred meetings with his junior officers. He was known to toss tennis balls at them to encourage them to react and speak up. His men called his last command, the battleship Nevada, the &quot;Cheer Up Ship,&quot; in tribute to his strict but initiative-encouraging ways. Sims also tossed out a ball on the larger scene. In 1909, speaking in London in the year the Great White Fleet returned home from its wo rld parade, he stated his view that if the British Empire were menaced by a European coalition, it could count on &quot;every ship, every dollar, every man and every drop of blood&quot; from the US. For this he was duly reprimanded-a reprimand he hung up on his office wall. And when the US entered World War I on 6 April 1917, Sims was at sea on his way to England to coordinate US-British naval operations.

Sims&#39;s Three-Week Battle When Sims got to London, his friend Admiral John Jellicoe, First Sea Lord at the Admiralty, wordlessly handed him a report. It showed disastrous shipping losses fo llowing the revival of unrestricted German submarine war two months earlier. Over a million tons, 5 percent of available ships, had been sunk. Sims was stunned. &quot;It looks as if the Germans were winning the war,&quot; he said to Jellicoe. &#39;&#39;They will win, unless we can stop these losses-and stop them soon,&quot; returned Jellicoe. And there was no solution in sight. Sims&#39; s response was to get at the roots of the problem. He met with naval officers and

with Prime Minister Lloyd George. Why not try the convoy system, which gathered shipping into fleets escorted by warships? T his had ass ured Britain&#39;s lifeline in the wars of the age of sail bur had been rejected by the naval staff, chiefly on the gro unds that there weren&#39;t escorts enough for the 2,500 ships enteri ng or leaving British ports each week. Digging soon revealed that this included fishing crafr and oth er small fry: the figure for deepwater traffics was under 150 ships weekly! These could indeed be mustered into escorted convoys . Sims had already called for US destroyers to be hurled into the fray. T he first gro up arrived in Ireland with commendable alacrity on 4 May 1917 (see Sea H istory 99, pp7-10). Now Sims threw his full weight behind the co nvoy system. Crashing through institutional delay, in just three weeks he secured by 30 April British agreement to try the convoy system. And he demanded that all avai lable destroyers be rushed across the Atlantic to beef up the naval escorts, saying the ships sh ould be where the battle was, in the approaches to Britain, rather than held in reserve where, as he said, &quot;there was no war.&quot; A reluctant President Woodrow Wilson, who had his own ideas about the battle, was dragooned inro agreement for an all-out convoy effort. So Sims got his way, and the submarine crisis was mastered before year-end, as more and more ships came in safely and U-boat losses mounted. Allied strategy counted on the transAtlantic flow of fresh American troops for the battle lines in France, a need made urgent

by the fact that Germany had knocked the Russian land behemoth out of the war. Germany came all too near to knocking out British sea power to pre-empt this strategy-a fact Sims would never forget. In postwar hearings on the naval war he maintained that there was no coherent US Navy plan for the war that had been obviously looming. H e cited the cos t in shipping and life incurred by the delays and factional disputes that had impeded swift and decisive execution of the convoy system. This made him no friends; cartoons appearedshowinghim belittlingtheNavy&#39;s role in the victory which the Navy and he had done so much to win. But clearly Sims was looking toward the future rather than refighting past battles. In fact he saw future needs with what seems almost uncanny prescience, calling for war plans directed to meet probable dangers, rather than abstract exercises. The USN avy was now the most powerful force to control the sea lanes vital to coalition war, and it had to grasp Neptune&#39;s trident firmly. Further to this extension of the conspiracy to get America reasonably armed and prepared to meet its oceanic responsibilities in a troubled world, Sims recognized as early as 1921 , based on Âˇw argaming conducted at the Naval War College, that the aircraft carrier, not the battleship, would be the capital ship of any future war. Typically, h e did not go to the extreme position of the flamboyant airman Billy Mitchell, who saw the aircraft carrier as a vestigial bit of navalism obstructing progress toward total concentration on air war. Sims saw the aircraft carrier as a vital instrument for projecting powe r on the oceans, where America&#39;s securi ty interests had to be met. And twenty years later, on 7 December 1941, it was a Japanese air strike at Pearl Harbor that pulled the US into World War II with a searing demo nstration of the reach and power of the aircraft carrier.

FDR and the Two-Ocean Navy In 1933, as one of the first acts of his administration, n ewly elected President Franklin D. Roosevelt ordered two new aircraft carriers, USS Enterprise and Yorktown. These fast, modern ships were funded as part of the Industrial Recovery Act to overcome the effects of the worldwide depression that afflicted America. They were to make up two-thirds of the three-carrier