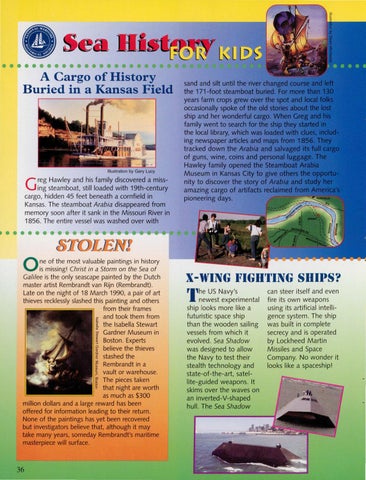 A Cargo of History Buried in a Kansas Field

reg Haw ley and his family discovered a miss-

Ging steamboat, still loaded with 19th-century cargo, hidden 45 feet beneath a cornfield in Kansas. The steamboat Arabia disappeared from memory soon after it sank in the Missouri River in 1856. The entire vessel was washed over with

sand and silt until the ri the 171-foot steamboat years farm crops grew occasionally spoke of ship and her wonderful family went to search the local library, which ing newspaper artides tracked down the Ara of guns, wine, coins a Hawley family opened Museum in Kansas C nity to discover the st amazing cargo of artifo pioneering days.

ne of the most valuable paintings in history is missing! Christ in a Storm on the Sea of Galilee is the only seascape painted by the Dutch master artist Rembrandt van Rijn (Rembrandt) . Late on the night of 18 March 1990, a pair of art thieves recklessly slashed this painting and others from their frames and took them from fil&quot; ~ the Isabella Stewart or Gardner Museum in Boston . Experts GJ believe the thieves &quot;&#39;a. stashed the &quot;~ ~ Rembrandt in a ~ _§ vault or warehouse. g&#39; The pieces taken g that night are worth as much as $300 million dollars and a large reward has been offered for information leading to their return . None of the paintings has yet been recovered but investigators believe that, although it may take many years, someday Rembrandt&#39;s maritime masterpiece will surface. (fJ

&#39;11 he US Navy &#39;s newest experimental sh ip looks more like a futuristic space sh ip than the wooden sailing vessels from which it evolved . Sea Shadow was designed to allow the Navy to test their stealth technology and state-of-the-art, satellite-guided weapons. It skims over the waves on an inverted-V-shaped hull. The Sea Shadow

can steer itself and even fire its own weapons usi ng it s artificial intelligence syst em . The ship was built in complete secrecy and is operated by Lockheed Martin Missiles and Space Company. No wonder it looks like a spaceship!