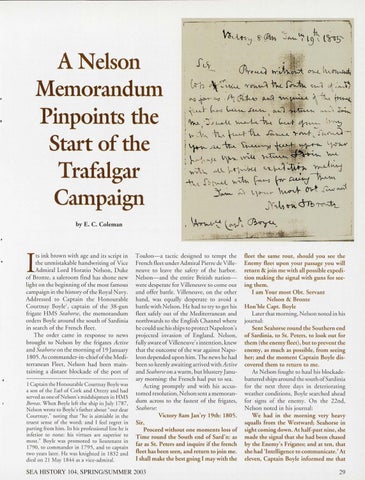 Pinpoints the Start of the Trafalgar Campaign by E. C. Coleman

ts ink brown with age and its script in the unmistakable handwriting of Vice Admiral Lord Horatio Nelson, Duke of Bronte, a saleroom find has shone new light on the beginning of the most famous campaign in the history of the Royal Navy. Addressed to Captain the Honourable Courtnay Boyle 1, captain of the 38-gun frigate HMS Seahorse, the memorandum orders Boyle around the south of Sardinia in search of the French fleet. The order came in response to news brought to Nelson by the frigates Active and Seahorse on the morning of 19 January 1805. As commander-in-chiefof the Mediterranean Fleet, Nelson had been maintaining a distant blockade of the porr of 1 Captain the Honourable Co urm ay Boyle was a so n of the Earl of Cork and Orrery and had served as one ofNelson&#39;s midshipmen in HMS Boreas. When Boyle left the ship in July 1787, Nelson wrote ro Boyle&#39;s fath er about &quot;our dear Courtnay,&quot; notin g that &quot; he is aimiab le in the truest sense of rhe word; and I feel regret in parting from him. In his professional line he is inferior to none: his virr ues are superior to most.&quot; Boyle was promoted to lieutenanr in 1790, to commander in 1795, and ro captain two years later. H e was knighted in 1832 and died on 21 May 1844 as a v ice-adm iral.

Toulon-a tactic designed to tempt the French fleet under Admiral Pierre de Villeneuve to leave the safery of the harbor. Nelson-and the entire British nationwere desperate for Villeneuve to come out and offer battle. Villeneuve, on the other hand, was equally desperate to avoid a battle with Nelson. He had to try to get his fleet safely our of the Mediterranean and northwards to the English Channel where he could use his ships to protect Napoleon&#39;s projected invasion of England. Nelson, fully aware of Villeneuve&#39;s intention, knew that the outcome of the war against Napoleon depended upon him. The news he had been so keenly awaiting arrived with Active and Seahorse on a warm, but blustery January morning: the French had put to sea. Acting promptly and with his accustomed resolution, Nelson sent a memorandum across to the fastest of the frigates, Seahorse: Victory Sam Jan&#39;ry 19th: 1805. Sir, Proceed without one moments loss of Time round the South end of Sard&#39;n: as far as St. Peters and inquire if the french fleet has been seen, and return to join me. I shall make the best going I may with the

fleet the same rout, should you see the Enemy fleet upon your passage you will return &amp; join me with all possible expedition making the signal with guns for seeing them. I am Your most Obt. Servant Nelson &amp; Bronte Hon&#39;ble Capt. Boyle Later that morning, Nelson noted in his journal: Sent Seahorse round the Southern end of Sardinia, to St. Peters, to look out for them (the enemy fleet), but to prevent the enemy, as much as possible, from seeing her; and the moment Captain Boyle discovered them to return to me. As Nelson fought to haul his blockadebattered ships around the south of Sardinia for the next three days in deteriorating weather conditions, Boyle searched ahead for signs of the enemy. On the 22nd, Nelson noted in his journal: We had in the morning very heavy squalls from the Westward; Seahorse in sight coming down. At half-past nine, she made the signal that she had been chased by the Enemy&#39;s Frigates; and at ten, that she had &#39;Intelligence to communicate.&#39; At eleven, Captain Boyle informed me that