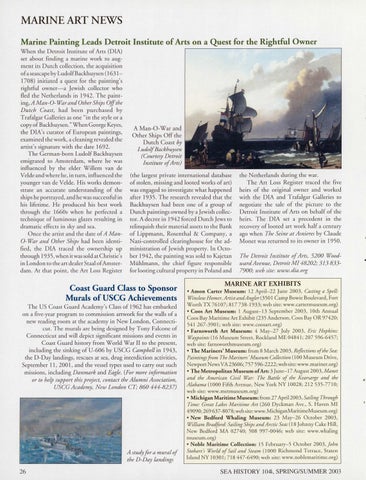 MARINE ART NEWS Marine Painting Leads Detroit Institute of Arts on a Quest for the Rightful Owner When the Detroit Institute of Arts (DIA) set about finding a marine work to augment its Dutch collection, the acquisition of a seascape by LudolfBackhuysen ( 16311708) initiated a quest for the painting&#39;s rightful owner-a Jewish collector who fled the Netherlands in 1942. The painting, A Man-0- War and Other Ships Off the Dutch Coast, had been purchased by Trafalgar Galleries as one &quot;in the style or a copy of Backhuysen.&quot; When George Keyes, the DIA&#39;s curator of European paintings, examined the work, a cleaning revealed the artist&#39;s signature with the date 1692. The German-born Ludolf Backhuysen emigrated to Amsterdam, where he was influenced by the elder Willem van de Velde and where he, in turn, influenced the younger van de Velde. His works demonstrate an accurate understanding of the ships he portrayed, and he was successful in his lifetime. He produced his best work through the 1660s when he perfected a technique of luminous glazes resulting in dramatic effects in sky and sea. Once the artist and the date of A Man0-War and Other Ships had been identified, the DIA traced the ownership up through 1935 , when it was sold at Christie&#39;s in London to the art dealer Staal ofAmsterdam. At that point, the Art Loss Register

A Man-0-War and Other Ships Off the Dutch Coast by LudoIf Backhuysen (Courtesy Detroit Institute ofArts) (the largest private international database of stolen, missing and looted works of art) was engaged to investigate what happened after 1935. The research revealed that the Backhuysen had been one of a group of Dutch paintings owned by a Jewish collector. A decree in 1942 forced Dutch Jews to relinquish their material assets to the Bank of Lippmann, Rosenthal &amp; Company, a Nazi-controlled clearinghouse for the administration of Jewish property. In October 1942, the painting was sold to Kajetan Muhlmann, the chief figure responsible for looting cultural property in Poland and

Coast Guard Class to Sponsor Murals of USCG Achievements The US Coast Guard Academy&#39;s Class of 1962 has embarked on a five-year program to commission artwork for the walls of a new reading room at the academy in New London, Connecticut. The murals are being designed by Tony Falcone of Connecticut and will depict significant missions and events in Coast Guard history from World War II to the present, including the sinking ofU-606 by USCG Campbell in 1943, the D-Day landings, rescues at sea, drug interdiction activities, September 11, 200 l , and the vessel types used to carry out such missions, including Danmark and Eagle. (For more information or to help support this project, contact the Alumni Association, USCG Academy, New London CT; 860 444-8237)

A study for a mural of the D-Day landings 26

the Netherlands during the war. The Art Loss Register traced the five heirs of the original owner and worked with the DIA and Trafalgar Galleries to negotiate the sale of the picture to the Detroit Institute of Ans on behalf of the heirs . The DIA set a precedent in the recovery of looted art work half a century ago when The Seine at Asnieres by Claude Monet was returned to its owner in 1950. The Detroit Institute ofArts, 5200 Woodward Avenue, Detroit Ml 48202; 313 8337900; web site: www.dia.org