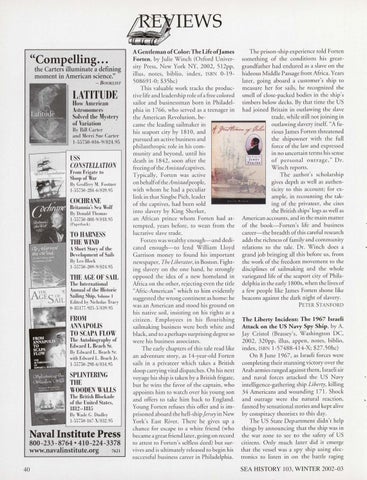 SPLINTERING THE WOODEN WALLS The British Blockade of the nitecl States,

T he prison-ship experience told Forren A Gentleman of Color: The Life of] am es Forten, by Jul ie Wi nch (Oxford Univer- something o f the conditio ns his greatsity Press, New Yo rk NY, 2002, 5 12pp, grandfa ther had endured as a slave on the illus, notes, bi bli o, index, IS BN 0- 19- hideo us Middle Passage fro m Africa. Years later, going aboa rd a cuscomer's ship co 508691-0; $35 hc) T his valuable work tracks the prod uc- meas ure her fo r sails, he recognized the tive li fe and leadership role ofa free colored smell of d ose-packed bodies in the ship's sail or and businessman born in Philadel- timbers below decks. By that time the US phi a in 1766, who served as a teenage r in had join ed Britain in outlawing the slave rrade, while still not joining in the American Revolution, beoutlawing slavery itself. "A fucame the leading sailmaker in ~,,...;r_fi,,!1.. rious James Forren threatened h is seaport city by 18 10, and the shipowner with the full pursued an active business and fo rce of the law and expressed philanth ro pic ro le in his comin no uncertain terms his sense m unity and beyond, until his o f pe rso nal o utr age," Dr. death in 1842, soon afte r the W inch reports. freeing of theAmistadcaptives . T he author's scholarship Typ ically, Forren was active gives dep th as well as authenon behalfoftheAmistad people, ticiry to this acco unt; fo r exwith whom he had a peculiar ample, in recounting the taklink in that Singbe Pieh, leader ing of th e privateer, sh e cites of th e captives, had been sold th e British ships' logs as well as into slavery by King Sherker, an African prince whom Fo rren had at- American acco unts, and in the main matter te mpted, years before, to wean fro m the of the book-Forten's life and business career- the breadth of this careful research lucrative slave trade. Forren was wealthy enough-and dedi- adds the richness of family and communi ry cated enough-co lend W illi am Lloyd relati ons co the tale. D r. Winch does a Ga rrison mo ney to fo und his impo rtant grand job bringing all this before us, from newspaper, The Liberator, in Boston. Fight- the work of the freedom movement co the ing slavery on the one ha nd, he strongly disciplines of sailmaking and the w hole opposed the idea of a new homeland in variegated li fe of the seaport city of PhilaAfrica on the oth er, rejecting even the title delphia in the early 1800s, when the lives of "Afric-Am erican" which to him evidently a few people like James Forren shone like suggested the wro ng co ntinent as home: he beaco ns against the dark night of slave1y . PETER STANFORD was an Ame rican and stood his gro und on his na tive soi l, insisti ng on his rights as a citizen. Em pl oyees in h is fl o uri shin g The Liberty Incident: The 1967 Israeli sailmaki ng business were both whi te and Attack on the US Navy Spy Ship, by A. black, and to a perhaps surprising degree so Jay C ristal (Brassey's, W as hin gton D C, 2002 , 320pp , illus, appen, notes, biblio, were his business associates. T he early chapters of this tale read like index, ISBN 1-57488-4 14-X; $27.50hc) On 8 June 1967, as Israeli forces were an adve ntu re story, as 14-year-old Fo rren sails in a privateer which takes a British completing their stunning victory over the sloop carrying vital dispatches . O n his next Arab armies ranged aga inst them , Israeli air voyage h is shi p is taken by a Bri tish fri gate, and naval forces attacked th e US N avy bur he wins the favor of the captai n, who intelligence-gathering ship Liberty, killing appoints him to watch over his yo ung son 34 Am eri cans and wo unding 17 1. Shock and offers to take him back to England. and outrage we re the natural reaction, Yo ung Forren refuses this offer and is im- fa nned by sensational stories and kept alive priso ned aboard the hell-ship jersey in New by conspiracy theorists to this day. The US State Depa rtment didn' t help York's East Rive r. T here he gives up a chance fo r escape to a whi te fr iend (who things by announ cing th at the ship was in became a great friend later, going on record the wa r zone to see w the safety of US to attest to Forren 's selfless deed) but sur- citizens . Only much la ter did it emerge vives and is ultimately released to begin his that the vessel was a sp y ship using elecsuccessfu l business career in Philadelphia. tronics to listen in on the battle raging