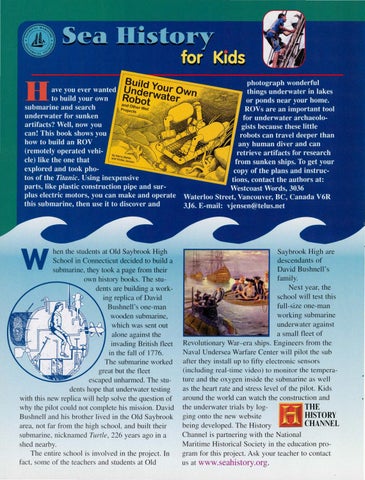 hen the students at Old Saybrook High School in Connecticut decided to build a submarine, they took a page from their own history books. The students are building a working replica of David Bushnell's one-man wooden submarine, which was sent out alone against the invading British fleet in the fall of 1776. The submarine worked great but the fleet escaped unharmed. The students hope that underwater testing with this new replica will help solve the question of why the pilot could not complete his mission. David Bushnell and his brother lived in the Old Saybrook area, not far from the high school, and built their submarine, nicknamed Turtle, 226 years ago in a shed nearby. The entire school is involved in the proj ect. In fac t, some of the teachers and students at Old

Saybrook High are descendants of David Bushnell's family. Next year, the school will test this full-size one-man working submarine underwater against a small fleet of Revolutionary War-era ships. Engineers from the Naval Undersea Warfare Center will pilot the sub after they install up to fifty electronic sensors (including real-time video) to monitor the temperature and the oxygen inside the submarine as well as the heart rate and stress level of the pilot. Kids around the world can watch the construction and the underwater trial s by logTHE ging onto the new website HISTORY being developed. The History CHANNEL Channel is partnering with the National Maritime Historical Society in the education program for thi s project. Ask your teacher to contact us at www.seahistory.org.