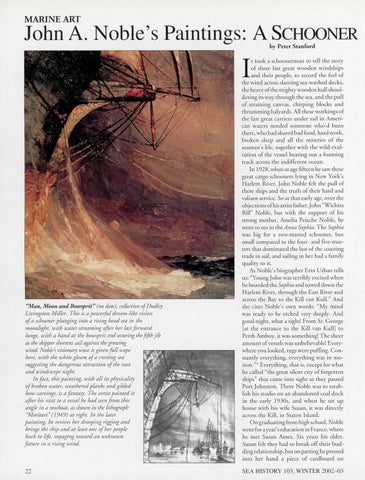 John A. Noble&#39;s Paintings: A SCHOONER by Peter Stanford

t rook a schoonerman to tell the story of these las t great wooden windships and their peo ple, to record the feel of the wind ac ross slanting sea-washed decks, the heave of rhe mi ghrywooden hull shouldering its way through th e sea, and the pull of straining canvas, chirping blocks and thrumming halyards. All th ese wo rkings of the last great carriers under sail in American waters needed som eone who&#39; d been there, who had shared bad food, h ard work, broken sleep and all the miseries of the seaman&#39;s life, together with the wild exultation of the vessel bearing out a foamin g track across the indifferent ocean. In 1928, when at age fifteen he saw chese great cargo schooners lying in New York&#39;s Harlem River, John No ble felt th e pull of chese ships and the tru th of their hard and valiant service. So ac that early age, over the obj ections ofhis artist fa ther, John &quot;Wichita Bill&quot; N oble, but wich the support of his strong mother, Amelia Peische No ble, he went to sea in the Anna Sophia. T he Sophia was big for a two-mas ted schooner, bur small compared to the fo ur- and five-m asters th at domin ated the las t of the coasting trade in sail, and sailing in her had a family quali ty to it. As Noble&#39;s biographer Erin U rban tells us: &quot;Young John was terribly excited when he boarded the Sophia and rowed down the H arlem Ri ve r, through the Ease Ri ver and across the Bay to the Kill van Kull. &quot; And she cites N oble&#39;s own words: &quot;M y mind was ready to be etched very deeply. And good night, what a sight! From Sr. George [at the entrance to the Kill van Kull] to Perth Amboy, it was something! T he sheer amount of vessels was unbelievable! Everywhere yo u looked, rugs were puffing. Co nstantly everything, everything was in motion.&quot;* Everything, that is, except fo r what he call ed &quot;th e great silent city of forgo tten ships&quot; that came into sight as they passed Port Johnston. T here N oble was to es tablish his studio on an abandoned coal dock in the early 1930s, and when he set up house with his wife Susan, it was directly across the Kill , in Staten Island. O n graduaring fromhigh school, No ble we nt fo r a year&#39;s education in France, where he met Susan Ames . Six years his elder, Susan felt they had to break off their budding relationship, bur on parting he pressed in to her hand a piece of cardboard on

&#39;&#39;Man, Moon and Bowsprit&quot; (no date), collection ofDudley Livingston Miller. This is a powerful dream-like vision ofa schooner plunging into a rising head sea in the moonlight, with water streaming after her last forward lunge, with a hand at the bowsprit end securing the fifth jib as the skipper shortens sail against the growing wind. Noble&#39;s visionary sense is given fitll scope here, with the white gleam ofa cresting sea suggesting the dangerous attraction ofthe vast and windswept night. In fact, this painting, with all its physicality of broken water, weathered planks and gilded bow carvings, is a fantasy. The artist painted it after his visit to a vessel he had seen from this angle in a rowboat, as shown in the lithograph &quot;Morituri&quot; (1949) at right. In the later painting, he revives her drooping rigging and brings the ship and at least one ofher people back to life, voyaging toward an unknown future in a rising wind.