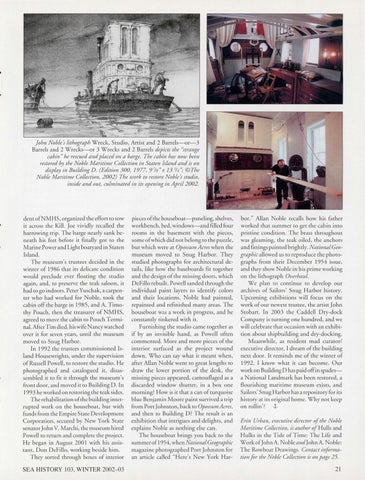 j ohn N oble's lithograp h Wreck, Srudio, Anisr and 2 Barrels- or-3 Barrels and 2 Wrecks-or 3 Wrecks and 2 Barrels depicts the "strange cabin" he rescued and placed on a barge. The cabin has now been restored by the Noble M aritime Collection in Staten Island and is on display in Building D . (Edition 3 00, 1377, 3 7/s" x 13 3/4 ''; ÂŠ The Noble Maritime Collection, 2 002) The work to restore N oble's studio, inside and out, culminated in its opening in April 2 002.

dent of N MHS, organized the effort to row it across rhe Kill. Joe vividly recalled the harrowing trip. The barge nearl y sank beneath his feet before it finally gor to the M arine Powe r and Light boatyard in Staten Island. T he museum 's trustees decided in the winter of 1986 that its delicate condition wo uld preclude ever floating the srudio again, and, to preserve the teak saloo n, it had to go indoo rs. Peter Yuschak, a carpenter who had worked for Noble, rook rhe cabin off the barge in 1985 , and A. Timothy Pouch, then the treasurer o f NMHS, agreed to move the cabin to Pouch T erminal. After Tim died, his wife N ancy watched over it for seven years, until the museum moved to Snug Harbor. In 1992 the trustees commissioned Island Housewrights, under the supervision of Russell Powell, ro restore the srudio. H e photographed and catalogued it, disassembled it to flt it through the museum 's front doo r, and moved ir to Buildin g D. In 1993 he worked on restoring th e teak sides. The rehabili ta tion of the building interrupted work on the houseboat, but with funds from the Empire State D evelopm ent Co rporati on, secured by New Yo rk State senator John V. M archi, the museum hired Powell to return and complete the project. H e bega n in August 2001 with his assistant, D on D eFillo, workin g bes ide him . They sorted through boxes of interior

pieces of the houseboat- paneling, shelves, wo rkbench, bed, windows-and fill ed four rooms in rhe basement with the pieces, so me of which did nor belong to the puzzle, but which were at Opossum Acres when rhe museum moved to Snug Harbor. They srudied photographs fo r architecrural details, like how the baseboards fir together and rhe design of the missing doors, which D eF illo rebuilt. Powell sanded through the individual paint laye rs to identi fy colors and their locations. Noble had painted, repainted and refini shed many areas. The houseboat was a work in progress, and he co nstanrly tinkered with it. Furnishing the studio came toge ther as if by an invisibl e hand, as Powell often commented. Mo re and more pieces of the interior surfaced as th e proj ect wo und down. W ho can say what it meant when, after Allan N oble we nt to great lengths to draw the lower portion of the desk, the missing pieces appeared , camoufl aged as a disca rded window shutter, in a box one morning? How is it that a can of turquoise blue Benjamin Moore paint survived a trip from Port Johnston, back to OpossumAcres, and then to Building D ? T he result is an exhibition that intrigues and delights, and explains N oble as nothing else can. T he houseboat brings yo u back ro the summerof 1954, when National Geographic magazine photographed Port J ohnsron fo r an article called "H ere's N ew York Har-

bor. " Allan N oble recalls how his father worked that summer ro get the cabin into pristin e co ndition. The brass throughout was gleaming, rhe teak oiled, the anchors and fittings painted brighrly. National Geograp hic all owed us to reproduce the photographs fro m their D ecember 1954 iss ue, and they show N obl e in hi s prime working on the lithograph Overhaul. We plan ro continue ro develop our archives of Sailors' Snug H arbor history. Upcoming exhibitions will focus on th e work of our newest trustee, the artist John Srobart. In 2003 the Caddell Dry-dock Co mpany is turning one hundred , and we will celebrate that occas ion with an exhibition about shipbuilding and dry-docking. Mea nwhile, as resident mad curator/ execu tive di rector, I dream of the building next doo r. It reminds me of the winter of 1992. I kn ow what it can become. Our work on Building D has paid offin spadesa Nation al Landm ark has been restored , a flourishing maritime museum exists, and Sailors' Snug H arbor has a repository for its histo ry at its original home. Wh y nor keep on ro llin '? t, Erin Urban, executive director of the Noble Maritime Collection, is author of Hulls and Hul ks in rhe Tide of T ime: The Life and Work ofJohn A. No bleandJohn A. No ble: T he Rowboat Drawings. Contact information for the Noble Collection is on page 25.