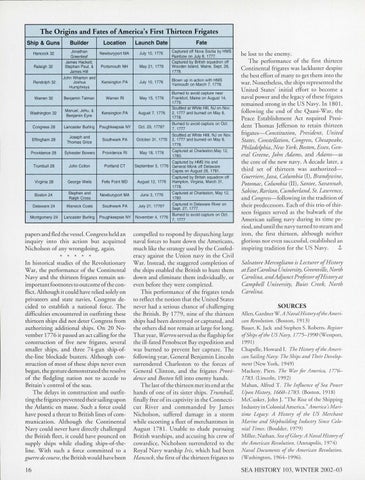 papers and fled the vessel. C ongress held an inquiry into this action bur acquitted Nicholson of any wrongdoing, again .

* * * * * In historical studies of rhe Revolutionary War, the performance of rhe Conrinenral Navy and the thirteen fri gates remain unimportant footnotes to outcome of rh e conflict. Al rho ugh it could have relied solely on privateers and stare navies, Congress decided to establish a national force. The difficulties encountered in outfitting these thirteen ships did nor deter Congress from authorizing additional ships. On 20 N ovember 1776 ir passed an act calling for the construction of five new frigates, several smaller ships, and three 74-gun ship-ofrhe-line blockade busters. Although construction of most of these ships never even began, the gesture demonstrated the resolve of the fledgling nation nor to accede to Britain &#39;s control of rhe seas. The delays in construction and outfitting the frigates prevented their sailing upon the Atlantic en masse. Such a force could have posed a threat to British lines of communica tion. Although the C ontinental Navy could never have directly challenged the British fleer, it could have pounced on supply ships while eluding ships-o f- rheline. With such a force committed to a guerre de course, the British wo uld have been

compelled ro respond by dispatching large naval fo rces to hum down the Americans, much like the strategy used by the Confederacy against the U nion navy in the C ivil War. Instead, rhe stagge red compl etion of the ships enabled the British to hum them down and eliminate them individually, or even before they were completed. This performance of the fri gates rends to reflect the notion that the United Stares never had a serious chance of challenging rhe British . By 1779, nine of the rhirreen ships had been destroyed or captured, and the others did nor remain at large for long. T har year, Warren served as the flagship for the ill-fared Penobscot Bay expedition and was burned to prevent her capture. The follo wing year, General Benjamin Lincoln surrendered C harleston to the forces of General C linton, and the frigates Providence and Boston fell into enemy hands. T he last of the thirteen mer its end at rhe hands of one of its sister ships. Trum bull, finally free ofirs captivity in rhe Connecti cut Rive r and comm anded by Jam es N icholson, suffered damage in a storm while escorting a fleer of merchantmen in August 178 1. U nable ro elude pursuing British warships, and accusing his crew of cowardice, N icholson surrendered to the Royal Navy wa rship Iris, which had been H ancock, rhe firs t of rhe rhirreen fri gates to

be lost to rhe enemy. T he performance of the first thirteen Co ntinental fri gates was lackluster despite rhe best effort of many to get them into the war. N onetheless, the ships represented the U nited States&#39; initial effo rt to become a naval power and the legacy of these fri gates remained strong in the US N avy. In 1801 , fo llowing the end of the Q uasi-War, the Peace Establishment Act requi red President T homas Jefferson to retain thirteen fri gates-Constitution, President, United States, Constellation, Congress, Chesapeake, Philadelphia, New Yo rk, Boston, Essex, General Greene, j ohn Adams, and Adams- as the core of the new navy. A decade later, a third set of th in een was authorizedGuerriere,java, Columbia (I) , Brandywine, Potomac, Columbia (II) , Santee, Savannah, Sabine, Raritan, Cumberland, St. Lawrence, and Congress-followin g in the tradition of their predecessors. Each of this trio of thi rteen frigates served as th e bulwark of rhe American sailing navy during its time period, and until the navy turned to steam and iron, rhe first thirteen, although neither glorious nor even successful, es tablished an 1. inspiring tradition for the US Navy. Salvatore M ercogliano is Lecturer ofH istory at East Carolina University, Greenville, North Carolina, andAdjunct Professor ofH istory at Campbell University, Buies Creek, North Carolina.