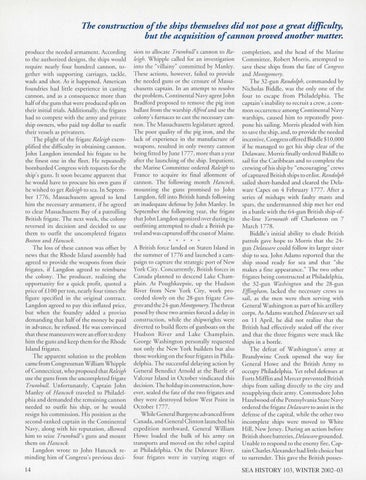 The construction of the ships themselves did not pose a great difficulty, but the acquisition of cannon proved another matter. produce the needed armament. According to the authorized designs, the sh ips would require nearly four hundred cannon, together with supporting carriages, tackle, wads and shot. As it happened, American foundr ies had little experi ence in casting cannon, and as a consequence more than half of the guns that were produced split on their initial trials. Additionally, the frigates had to compete with the army and private ship owners, who paid top dollar to outfit their vessels as privateers. The plight of the frigate Raleigh exemplified the difficulty in obtaining cannon. John Langdon intended his frigate to be th e finest one in the fleet. H e repeatedly bombarded Congress with requests for the ship 's guns. It soon becam e apparent that he would have to procure his own guns if he wished to get Raleigh to sea. In September 1776, Massachuserrs agreed to lend him the necessary armament, if he agreed to clear Massachusetts Bay of a patrolling British frigate. The next week, the colony reversed its decision and decided to use them to outfit the uncompleted frigates Boston and Hancock. The loss of these cannon was offset by news that the Rhode Island assembly had agreed to provide the weapons from their frigates , if Langdon agreed to reimburse the colony. The producer, realizing the opportunity for a quick profit, quoted a pri ce of fl 00 per ton, nearly four times the figure specified in the original contract. Langdon agreed to pay this infl ated price, but when the foundry added a proviso demanding that half of the money be paid in advance, he refused. H e was co nvinced that these maneuvers were an effort to deny him the guns and keep them for the Rhode Island frigates. The apparent solution to the problem came from Congressman William Whipple of Co nnecticut, who proposed that Raleigh use the guns from the uncompleted frigate Trumbull. Unfortunately, Captain John Manley of Hancock traveled to Phil adelphia and demanded the remaining cannon needed to outfit his ship, or he would resign his commission . His position as the second-ranked captain in the Continental Navy, along with his reputation, allowed him to seize Trumbull's guns and mount them on Hancock. Langdon wrote to John Hancock reminding him of Congress's previous deci-

sion to allocate Trumbull's cannon to Raleigh. Whipple called for an investigation into the "villainy" committed by Man ley. T hese actions, however, fai led to provide the needed guns or the censure of Massachusetts captain. In an attempt to resolve the problem, Continental Navy age nt John Bradford proposed to remove the pig iron ballast from the warship Alfred and use the colony's furnaces to cast the necessary cannon. The Massachuserrs legislature agreed. The poor quality of th e pig iron, and the lack of experience in the manufacture of weapons, resulted in only twenty cannon being fitted by June 1777, more than a year after the launching of the ship. Impatient, the Marine Committee ordered Raleigh to France to acquire its final allotment of cannon. The fo llowing month Hancock, mounting the guns promised to John Langdon, fell into British hands fo llowing an inadequate defense by John Manley. In September the following yea r, th e frigate that John Langdon agonized over during its outfitting attempted to elude a British patrol and was captured off the coast of Maine.

* * * * * A British force landed on Staten Isl and in the summer of 1776 and launched a campaign to capture the strategic port of New York C ity. Concurrently, British forces in Canada planned to descend Lake C ham plain. At Poughkeepsie, up the Hudso n River from New York City, work proceeded slowly on the 28-gun frigate Congress and the 24-gunMontgomery. The threat posed by these two armies forced a delay in construction, while the shipwrights were diverted to build fleets of gunboats on the Hudso n Ri ve r and Lake Champ lain. George Washington personally reques ted not only th e New York builders but also those working on the four frigates in Philadelphia. The successful delaying action by G eneral Benedict Arnold at the Battle of Valcour Island in October vindicated this decision . The holdup in construction, however, sealed the fate of the two frigates and they were destroyed below West Point in October 1777. While General Burgoyne advanced from Canada, and General Clinton launched his expedition north ward, General Willi am Howe loaded the bulk of his army on transports and moved on the rebel capital at Philadelphia. On th e Delaware River, four frigates were in varying stages of

comp letion, and the head of the Marine Co mmittee, Robert Morris, attempted to save these ships from the fate of Congress and Montgomery. The 32-gun Randolph, commanded by Nicholas Biddle, was the only one of the four to escape from Philadelphia. The captain's inability to recruit a crew, a co mmon occurrence among Continental Navy warships, caused him to repeatedly postpone his sailing. Morris pleaded with him to save the ship, and, to provide the needed incentive, Co ngress offered Biddle $ 10,000 if he managed to get his ship clear of the Delaware. Morris finally ordered Biddle to sail for the Caribbean and to complete the crewing of his ship by "encouraging" crews of captured British ships to en list. Randolph sailed short-handed and cleared the Delaware Capes on 4 February 1777. After a series of mishaps with faulty masts and spars, the undermanned ship met her end in a battle with the 64-gun British ship-ofthe-line Yarmouth off Charleston on 7 March 1778. Biddle's initial ability to elude British patrols gave hope to Morris that the 24gun Delaware co uld follow its larger sister ship to sea. John Adams reported that the ship stood ready for sea and that "s he makes a fine appearance." The two other frigates being constructed at Philadelphia, the 32-gun Washington and the 28-gun Effingham, lacked the necessaty crews to sail, as the men were then serving with General Washington as part of his artillery corps. As Adams watched Delaware set sail on 11 Apri l, he did not realize that the British had effectively sealed off the rive r and that the three frigates were stuck like ships in a bottle. T he defeat of Washington's army at Brandywine Creek opened the way for General Howe and the British Army to occupy Philadelphia. Yet rebel defenses at Forts Mifflin and Mercer prevented British ships from sailing directly to the city and resupplying their army. Commodore John Hazelwood of the Pennsylva nia State Navy ordered the frigate Delaware to assist in the defense of the capital, while the other two incomplete ships were moved to White Hill, New Jersey. During an action before British shore batteries, Delaware grounded. Unable to respond to the enemy fire, Captain Charles Alexa nder had Ii ttle cho ice but to surrender. This gave the British posses-