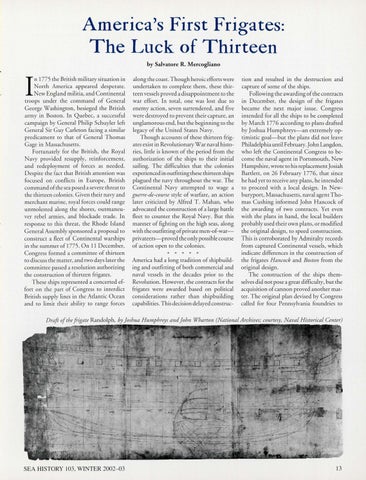 along the coast. T hough heroic efforts were undertaken to co mplete them, these thirteen vessels proved a disappoinrmenr ro the war effort. In ro ta!, one was lost due ro enemy action, seven surrendered, and five were destroyed ro prevenr their capture, an unglamorous end, but the beginning ro the legacy of the U nited States Navy. T hough acco unts of these thirreen frigates exist in Revolutionary War naval hisrories, little is known of the period from the authorization of the ships ro their initial sailing. The diffic ulties that the colonies experienced in outfitting these thirteen ships plagued the navy throughout the war. The Conrinental Navy attempred ro wage a guerre-de-course sryle of warfare, an action later criticized by Alfred T. M ahan, who advocated the construction of a large battle fleet ro counrer the Royal Navy. But this manner of fighting on the high seas, along with the outfitting of priva te men-of-warprivateers-proved the only possible course of action open ro the colonies .

* * * * * America had a long tradition of shipbuilding and outfitting of both commercial and naval vessels in the decades prior ro the Revolution . H owever, the contracts for the frigates were awarded based on political considerations rather than shipbuilding capabilities. T his decision delayed construe-

n on and resulted in the destruction and caprure of some of the ships. Following the awarding of the co ntracts in December, the design of the frigates becam e the next major issue. Congress inrended fo r all the ships ro be completed by March 1776 according ro plans drafted by Joshua Humphreys-an extremely optimistic goal- but the plans did not leave Philadelphia unril February.John Langdon, who left the Continental Congress ro become the naval agent in Portsmouth, New Hampshire, wrote ro his replacement Josiah Bartlett, on 26 February 1776, that since he had yet ro receive any plans, he intended to proceed with a local design. In N ewburyport, Massachusetts, naval agenr Thomas C ushing informed John H ancock of the awa rding of two conrracts. Yet even with the plans in hand, the local builders probably used their own plans, or modified the original design, ro speed construction. T his is corroborated by Admiral ry records from captured C ontinenral vessels, which indicate differences in the construction of the fr igates H ancock and Bosto n from the original design . T he consrruction of the ships themselves did not pose a great difficulry, but the acquisition of cannon proved an other matter. T he original plan devised by C ongress called fo r four Pennsylvania fo undries ro