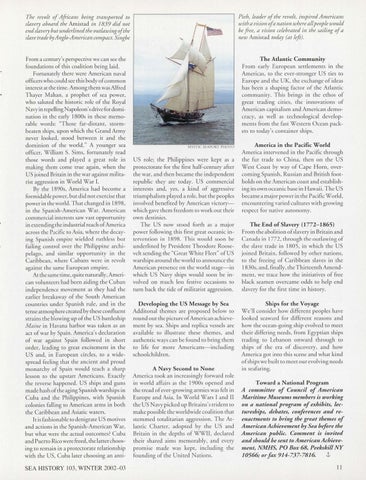 Pieh, leader of the revolt, inspired Americans with a vision ofa nation where allpeople would be fee, a vision celebrated in the sailing ofa new Amistad today (at left).

The revolt of Afticans being transported to slavery aboard the Amistad in 1839 did not end slavery but underlined the outlawing ofthe slave trade by Anglo-American compact. Singbe

From a century&#39;s perspective we can see the foundations of this coalition being laid. Fortunately there were American naval offi cers who could see this body of common interest at the ti me. Among them was Alfred Thayer Mal1an, a prophet of sea power, who saluted the historic role of the Royal Navy in repelling Napoleon &#39;s drive for domination in the early 1800s in these m emorable words: &quot;Those far-distant, stormbeaten ships, upon whi ch the G rand Army never looked, stood berween it and the dominion of the world. &quot; A yo unger sea officer, William S. Sims, fort unately read those words and played a great role in making them come true again, when the US joined Britain in the war against militarist aggression in World War I. By the 1890s, America had become a form idable power, but did not exercise that power in the wo rld. That changed in 1898, in the Spanish-American War. American co mmercial interests saw vas t opportunity in extending the ind ustri al reach of America ac ross the Pacific to As ia, where the decaying Spanish emp ire wielded ruthless but fa iling control over the Philippine archi pelago, and similar opportunity in the Caribbean, where C ubans were in revolt against the same European empire. At the same time, quite naturally,Ame rican volunteers had been aiding the C uban independence movement as they had the earlier breakaway of the So uth American countries under Spanish rul e, and in the tense atmosphere created by these co nfluent strains the blowing up of the US battleship Maine in H ava na harbor was taken as an act of war by Spain. America&#39;s declaration of war against Spain followed in short order, leadi ng to great exci tement in the US and, in European circles, to a widespread feeling that the ancient and proud monarchy of Spain wo uld teach a sharp lesson to the upstart Americans. Exactly the reve rse happened. US ships and guns made has h of the aging Spanish wa rships in C uba and the Philippines, with Spanish colonies falling to American arms in both the Caribbean and Asiatic waters. It is fashionab le to denigrate US moti ves and actions in the Spanish-American War, bur what were the actual outcom es? C uba and Puerto Rico were freed, the latter choosing to remain in a protectorate relationship with the US, C uba later choosing an anti-

The Atlantic Community From early European settlements in th e Americas, to the ever-stronger US ties to Europe and the UK, the exchange of ideas has been a shaping factor of the Atlantic communi ty. This brings in the ethos of great trading ci ti es, the innovation s of American capitalism and American democracy, as well as technological developments from the fast Western Ocean packets to today&#39;s contain er ships. MYSTIC SEAPORT PHOTO

US role; the Philippin es were kept as a protectorate for the first half-century after the war, and th en became the independent republic they are today. US commercial interests and, yes, a kind of aggressive triumphalism played a role, but the peoples involved benefited by American victorywhich gave th em freedom to work out their own destinies. The US now stood forth as a major power fo llowing this first great oceanic intervention in 1898. This wou ld soo n be underlined by President Theodore Roosevelt sending the &quot;G reat W hite Fleet&quot; of US warships around the wo rld to announce the American presence on the wo rld stage-in wh ich US Navy ships wo uld soon be in volved on much less festive occasions to turn back the tide of militarist aggression.

America in the Pacific World America intervened in the Pacific through the fur trade to C h ina, then on the US West Coast by way of Cape Horn , overcoming Spanish, Russian and British footholds on the American coast and establishing its own oceanic base in Hawaii. The US became a major power in the Pacific World, encountering varied cultures with growing respect for native autonomy.

The End of Slavery (1772-1865) From the abolition ofslavery in Britai n and Ca nada in 1772, throu gh rh e outlawin g of the slave trade in 1805, in which the US joined Brita in, followed by other nations, to the freeing of Caribbean slaves in the 1830s, and, fin ally, the T hirteen th Amendment, we trace how the initiatives of free black seamen overcam e odds to help end slavery for the first time in history.

Developing the US Message by Sea

Ships for the Voyage

Additonal themes are proposed below to round out the picture ofAmerican achi evem ent by sea . Ships and replica vessels are available to illustrate these themes, and authentic ways can be found to bring them to life for more Americans-including schoolchildren.

A Navy Second to None

We&#39;ll consider how different peoples have looked seawa rd for different reaso ns and how the ocean-go ing ship evolved to m eet their differing needs, from Egyptian ships trading to Lebanon onward through to ships of the era of discovery, and how America got into this scene and what kind of ships we built to m eet our evolving needs in seafaring.

America took an increasingly forward role in world affai rs as the 1900s opened and the tread of ever-growing armi es was felt in Europe and Asia. In World Wars I and II the US Navy picked up Britains&#39;s trident to make possible the wo rldwide coaliti on that stemmed totalitarian aggression. T he Atlantic Charter, adopted by the US and Britain in the depths of WWII, declared their shared aims memorably, and every promise made was kept, including the foundin g of the United Nations.

Toward a National Program A committee of Council of American Maritime Museums members is working on a national program of exhibits, lectureships, debates, conferences and reenactments to bring the great themes of American Achievement by Sea before the American public. Comment is invited and should be sent to American Achievement, NMHS, PO Box 68, Peekskill NY 10566; orfax 914-737-7816. .t