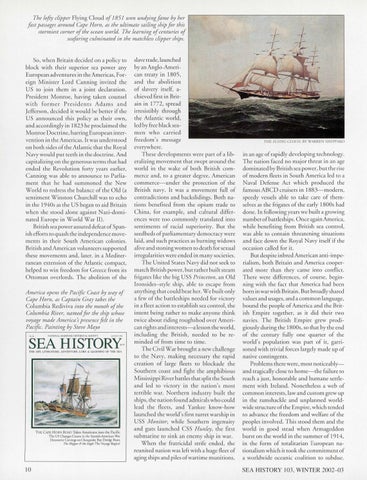 The lofty clipper Flying Cloud of 1851 won undying fame by her fast passages around Cape Horn, as the ultimate sailing ship for this stormiest corner of the ocean world. The learning of centuries of seafaring culminated in the matchless clipper ships.

So, when Britain decided on a policy to block with their superior sea power any European adventures in the Americas, Foreign Minister Lord Canning invited the US to join them in a joint declaration. President Monroe, having taken counsel with for m er Presidents Adams and Jefferson, decided it would be better if the US ann ounced this policy as their own, and accordingly in 1823 he proclaimed the Monroe Doctrine, barring Europea n intervention in the Americas. Ir was understood on both sides of the Atlantic that the Royal Navy wo uld put teeth in the doctrine. And capitalizing on the generous terms that had ended the Revoluti on forty years ea rlier, Canning was able to announce to Parliament that he had summoned the New World to redress the balance of the Old (a sentiment W inston C hurchill was to echo in the 1940s as the US began to aid Britain when she stood alone against Nazi-do minated Europe in World War II). British sea power ass ured defeat of Spanish efforts to quash the independence movements in their South American coloni es. British and American volunteers supported these mo vemems and, later, in a Mediterranean extension of the Atlantic compact, helped to win freedom for Greece from its Ottoman overlords. T he abolition of the America opens the Pacific Coast by way of Cape H orn, as Captain Gray takes the Columbia Rediviva into the mouth of the Colum bia River, named for the ship whose voyage made Americas presence felt in the Pacific. Painting by Steve Mayo NAT lO~-&#39;l . MAR ITIMf:

slave trade, launched by an Anglo-American treaty in 1805 , and the abolition of slavery itself, achieved first in Britain in 1772, spread irres istibly through the Atlantic world, led by free black seamen who carried freedom &#39;s message everywhere. T hese developmems were part of a liberalizing movement that swept aro und the world in the wake of both British commerce and, to a greater degree, American com merce-under the protection of the British navy. It was a movement full of contradictions and backslidin gs. Both nations benefited from the opium trade to China, for example, and cultural differences were too commonly translated into sentiments of racial superio ri ty. But the seedbeds of parliamentary democracy were laid, and such practices as burning widows alive and stoning women to death for sexual irregularities were ended in many societies. The United States Navy did not seek to match Bri rish power, but rather built steam fri gates like the big USS Princeton, an Old Ironsides-style ship , able to escape from anything that could beat her. We built only a few of the battleships needed for victory in a fleet ac tion to es tabli sh sea co ntrol, the intent being rather to make anyo ne think twice about riding roughshod over American righ ts and interests-a lesson the world, including the British, needed to be reminded of from time to time. The C ivil War brought a new challenge to the Navy, making necessary the rapid creation of large fleets to blockade the Southern coast and fi ght the amphibious Mississippi River battles that split the Sou th and led to victory in the nati on&#39;s most terrible wa r. Northern industry built the ships, the nation found admirals who co uld lead the fleets, and Yankee know-how launched the wo rld&#39;s first turret wa rship in USS Monitor, whil e Southern in genui ty and guts launched CSS Hunley, the first submarine to sink an enemy ship in war. When the fratricidal strife ended, the reunited nation was left with a huge fleet of aging ships and piles of wartim e munitions,

in an age of rapidly develop ing techn ology. T he nation fa ced no major threat in an age dominated by British sea power, but the rise of modern fleets in So uth America led to a Naval D efense Act which produced the famous ABCD cruisers in 1883- modern, speedy vessels able to take care of themselves as the frigates of the early 1800s had done. In fo llowing yea rs we built a growing number of battleships. 0 nee again America, whil e benefiting from British sea com ro l, was able to contain threatening situations and face down the Royal Navy itself if the occasion called for it. Bur despite inbredAmerican anti-imperialism, both Britain and America cooperated more than they came into conflict. There were differences, of course, beginning with the fact that A meri ca had been born in war with Britain . But broadly shared values and usages, and a com mon language, bound the people of Am erica and the British Empire together, as it did their two navies. The British Empire grew prodigiously during the 1800s, so that by the end of the century fully one qu arter of the wo rld&#39;s population was part of it, garrisoned with trivial forces largely made up of . . nanve connngents. Problems there were, most noticeablyand tragically close to home-the failure to reach a just, honorable and humane settlement with Ireland. Nonetheless a web of common interests, law and custo m grew up in the ramshackle and unplanned worldwide structure of the Empire, which tended to advance the freedom and welfare of the peoples in volved. This stood them and the wo rld in good stead when Armageddon burst on the world in the summer of 191 4, in the form of totalitarian European nationalism which it took the co mmitment of a wo rldwide oceanic coalition to subdue.