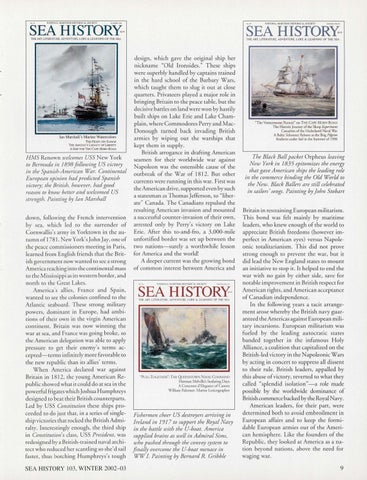 HMS Renown welcomes USS New York to Bermuda in 1898 following US victory in the Spanish-American War. Continental European opinion had predicted Spanish victory; the British, however, had good reason to know better and welcomed US strength. Painting by Ian Marshall

down, following the French intervention by sea, whi ch led to the surrender of Cornwallis's army in Yorktown in rhe autumn ofl 781. New York's JohnJay, one of the peace commissioners meeting in Paris, learned from English friends that the British government now wanted to see a strong America reaching in to the continental mass to the Mississippi as its western border, and north to the Great Lakes. America's allies, France and Spa in , wanted to see the colonies confined to the Atlantic seaboard. These strong military powers, dominant in Europe, had ambitions of their own in th e virgin American continent. Britain was now winning the war at sea, and France was going broke, so the American delegation was able to apply pressure to get their enemy's terms accepted-terms infin itely more favora bl e to the new republic than its allies' terms. W h en America declared war agains t Britain in 1812, the yo ung American Republic showed what it could do at sea in the powerful frigates which] oshua Hurn phreys designed to beat their British counterparts. Led by USS Constitution these ships proceeded to do just that, in a series of singlesh ip victories that rocked the British Admiralty. Interestingly enough, the third ship in Constitution's class, USS President, was redesigned by a British-trained naval architect who reduced her scan ding so she'd sail faste r, thus botching Humphreys's rough SEA HISTORY 103, WINTER 2002-03

T HE ART. LITERATURE. ADVENTURE, LORE & LEARNING OF THE SEA

design, which gave the original ship her nickname "Old Ironsides." T hese ships were superb ly handled by captains trained in the hard school of the Barbary Wars, which taught them to slug it out at close quarters. Privateers played a major role in bringing Britain to the peace table, bur the decisive battles on land were won by hastily built ships on Lake Erie and Lake Champlain, where Commodores Perry and MacDonough turned back invading British armies by wiping our rhe warships that kept them in supp ly. British arrogance in drafting American seamen fo r their wo rldwide war against Napoleon was the ostensible cause of the outbreak of the War of 18 12. But other currents were running in this war. First was the American drive, supported even by such a statesman as T homas Jefferson, to "liberate" Canada. The Canadians repulsed the resulting American invasion and mounted a successful counter-invas ion of their own, arrested only by Perry's victory on Lake Erie. After this to-and-fro, a 3,000-mile unfortified border was set up berween the rwo nations-surely a worthwhile lesson for America and the wo rld! A deeper current was the growing bond of common interest berween America and NATIONA L MARITIM E HISTORICAL SOC11:."TY

Fishermen cheer US destroyers arriving in Ireland in 1917 to support the Royal Navy in the battle with the U-boat. America supplied brains as well in Admiral Sims, who pushed through the convoy system to finally overcome the U-boat menace in WW I Painting by Bernard R. Gribble

"The Venturesome Pursuic" on THE CAPE HORN ROAD The Historic Journey of the Sloop b.periment

The Black Ball packet Orpheus leaving New York in 1835 epitomizes the energy that gave American ships the leading role in the commerce binding the Old World to the New. Black Ballers are still celebrated in sailors' songs. Painting by j ohn Stobart

Britain in rescraining European militarism. This bond was felt mainly by maritime leaders, who knew enough of che world to appreciate British freedoms (however imperfect in American eyes) versus Napoleonic totalitarianism. This did not prove strong enough to prevent the war, but it did lead rhe New England states ro mount an initiative to stop it. Ir helped to end the war wi th no gain by either side, save for notable improvement in British respecc for American rights, and American acceptance of Canadian independence. In the following years a tacit arrangement arose whereby the British navy guaranteed the Americas against European military incursions. European militarism was fueled by the leading autocratic states banded together in rhe infamous Holy Alliance, a coalition rhar capitalized on the British-led victory in the Napoleo nic Wars by acting in co ncert to suppress all dissent to their rule. British leaders, appalled by this abuse of victory, reverted to what they called "splendid isolation" -a role made possible by the worldwide dominance of British commerce backed by the Royal Navy. American leaders, for their part, were determined both to avoid embroilment in European affairs and to keep the formidable European armies out of the American hemisphere. Like the founders of the Republic, they looked at America as a nation beyo nd nations, above the need for wagmg war.