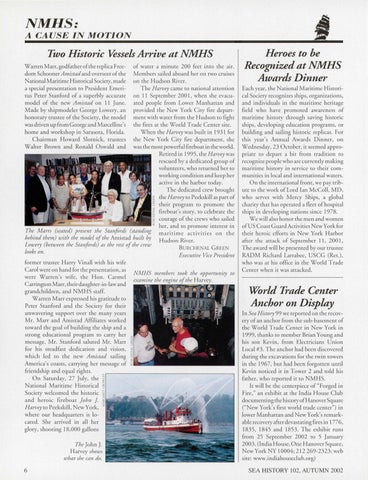 NMHS: A CAUSE IN MOTION

Two Historic Vessels Arrive at NMHS Warren Marr, godfarherofrhe rep I ica Freedom Schooner Amistad and overseer of the National Maritime Historical Society, made a special presentation to President Emeritus Peter Stanford of a superbly accurate model of the new Amistad on 11 June. Made by shipmodeler George Lowery, an honorary rrusree of the Society, the model was driven up from George and Marcelline&#39;s home and workshop in Sarasota, Florida. C hairman Howard Slotnick, trustees Walter Brown and Ronald Oswald and

of water a minute 200 feet into the air. Members sailed aboard her on two cruises on the Hudson River. The Harvey came to national attention on 11 September 2001 , when she evacuated people from Lower Manhattan and provided the New York City fire department with water from the Hudson to fight the fires at the World Trade Center site. When the Harvey was built in 1931 for the New York City fire department, she was the most powerful fireboat in the world. Retired in 1995, the Harvey was rescued by a dedicated group of volunteers, who returned her to working con di rion and keep her active in the harbor today. The dedicated crew brought ~ the Harvey to Peekskill as part of ~ their program to promote the ~ fireboat&#39;s story, to celebrate the Ci courage of the crews who sailed ~ her, and to promote interest in The Marrs (seated) present the Stanfards (standing maritime act ivit ies on the behind them) with the model of the Amisrad built by Hudson River. Lowery (between the Stanfards) as the rest of the crew BURCHENAL GREEN Looks on. Executive Vice President former trustee Harry Vinall with his wife Caro l were on hand for the presentation, as NMHS members took the opportunity to were Warren&#39;s wife, the Hon. Carmel examine the engine ofthe Harvey. Carrington Marr, their daughter-in-law and grandchi ldren, and NMHS sraff. Warren Marr expressed his gratitude to Peter Stanford and the Society for their unwavering support over the many years Mr. Marr and Amisrad Affiliates worked toward the goal of building the ship and a strong educational program to carry her message. Mr. Stanford salured Mr. Marr for his steadfast dedication and vision, which led to the new Amistad sailing America&#39;s coasts, carrying her message of friendship and equal rights. ,_ ~------------------~ On Saturday, 27 July, the ~ ~ National Maritime Historical u Society welcomed the historic ~ &lt; and heroic fireboat john ]. ~ Harvey to Peekskill, New York, :; where our headquarters is located. She arrived in all her glory, shooting 18,000 gallons The John J. Harvey shows what she can do.

Heroes to be Recognized at NMHS Awards Dinner Each year, the National Maritime Historical Society recognizes ships, organizations, and individuals in the maritime heritage field who have promoted awareness of maritime history through saving historic ships, developing education programs, or building and sai ling historic replicas. For this year&#39;s Annual Awards Dinner, on Wednesday, 23 October, it seemed appropriate to depart a bit from tradition to recognize people who are currently making maritime history in service to their communities in local and international waters. On the international front, we pay tribute to the work of Lord Ian McColl, MD, who serves with Mercy Ships, a global charity that has operated a fleet of hospital ships in developing nations since 1978. We will also honor the men and women of US Coast Guard Activities New York for their heroic efforts in New York Harbor after the attack of September 11, 2001, The award will be presented by our trustee RADM Richard Larrabee, USCG (Ret.), who was at his office in the World Trade Center when it was attacked.

World Trade Center Anchor on Display In Sea History 99 we reported on the recovery of an anchor from the sub-basement of the World Trade Center in New York in 1999, thanks to member Brian Young and his son Kevin, from Electricians Union Local #3. The anchor had been discovered during the excavations for the twin rowers in the 1967, but had been forgotten until Kevin noticed it in Tower 2 and told his father, who reported it to NMHS. Ir will be the centerpiece of &quot;Fo rged in Fire,&quot; an exhib it at the India House C lub documenting the h isrmy ofHanover Square (&quot;New York&#39;s first wo rld trade center&quot;) in lower Manhattan and New York&#39;s remarkab le recovery after devastating fires in 1776, 1835, 1845 and 1853. The exhibit runs from 25 September 2002 to 5 January 2003. (India House, One Hanover Square, New York NY 10004; 212 269-2323; web sire: www.indiahouseclub.org)