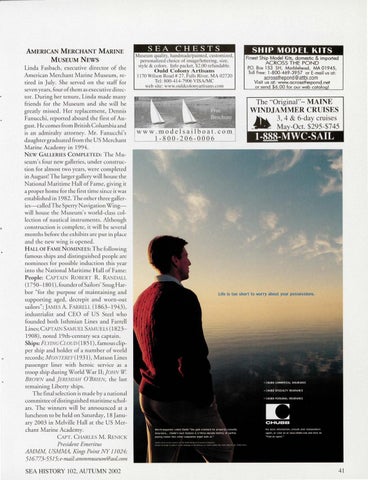 AMERICAN MERCHANT MARINE MUSEUM NEWS Linda Fasbach, executive director of the American Merchant Marine Museum, retired in July. She served on the staff for seven years, four of them as executive director. During her tenure, Linda made many friends for the Museum and sh e will be greatly missed. Her replacement, Dennis Fan ucchi, reported aboard the first of August. He comes from British Columbia and is an admiralty attorney. Mr. Fanucchi&#39;s daughter graduated from the US Merchant Marine Academy in 1994. NEW GALLERIES COMPLETED: The Museum &#39;s four new galleries, under construction for almost two years, were completed in August! The larger gallery will house the National Maritime Hall of Fame, giving it a proper home for the first time since it was established in 1982. The other three galleries-called The Sperry Navigation Wingwill house the Museum&#39;s world-class collectio n of nautical instruments. Although construction is complete, it will be several months before the exhibits are put in place and the new wing is opened. HALL OF FAME NOM INEES: T h e following famous ships and distinguished people are nominees for possible induction this year into the National Maritime Hall of Fame: People: CAPTAIN ROBERT R. RANDALL (1 750- 1801), founderofSai lo rs&#39; Snug Harbor &quot;for the purpose of maintai ning and supporting aged, decrepit and worn-out sailors&quot;; JAMES A. FARRELL (1863-1943), industrialist and CEO of US Steel who founded both Isthmian Lines and Farrell Lines; CAPTAIN SAMUEL SAMUELS (18231908), noted 19th-century sea captain. Ships: FLYING CLOUD (l85 l), famous clipper ship and holder of a number of world records; MONTEREY(l93l), Matson Lines passenger liner with heroic service as a troop ship during World War lI;jOHN W BROWN and J EREMIAH O&#39;BRIEN, the last remaining Liberty ships. The final selection is made by a national committee of distinguished maritime scholars. The winners will be announced at a luncheon to be held on Saturday, 18 January 2003 in Melville Hall at the US Merchant Marine Academy. CAPT. CHARLES M. RENICK

Visit us at: www.acrossthepond.net or send $6.00 for our web coto lo !

Life is too short to worry about your possessions.