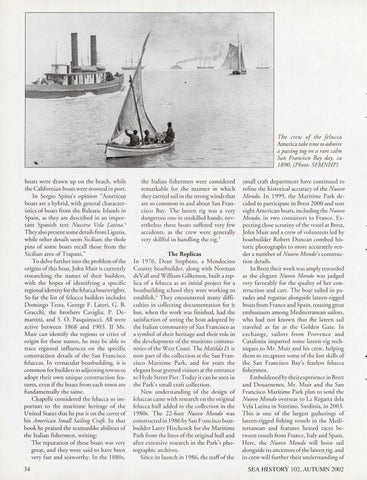 The crew of the felucca America take time to admire a passing tug on a rare calm San Francisco Bay day, ca 1890. (Photo: SFMNHP) boats were drawn up on the beach, while the C alifornian boats were moored in port. In Sergio Spina&#39;s opinion &quot;American boats are a hybrid, with general characteristics of boats from the Balearic Islands in Spain, as they are described in an important Spanish text Nuestra Vela Latina. 4 They also present some details from Liguria, while other details seem Sicilian: the thole pins of some boats recall those from the Sicilian area ofTrap ani. &quot; To delve further into the problem of the origins of this boat, John Muir is currently researching the names of their builders, with the hopes of identifying a specific regional identity for the felucca boatwrights. So far the list of felucca builders includes Domingo Testa, George F. Lateri, G. B. Gracchi, the brothers Caviglia, P. Demartini, and S. 0 . Pasquinucci. All were active between 1868 and 1903. If M r. Muir can identify the regions or cities of origin for these names, he may be able to trace regional influences on the specifi c construction details of the San Francisco feluccas. In vernacular boatbuilding, it is common for builders in adj oi ning towns to adopt their own unique co nstruction features, even if the boats from each town are fundamentally th e same. Chapelle considered the felucca so important to the maritime heritage of the United States that he put it on the cover of his American Small Sailing Craft. In that book he praised the seamanlike abilities of the Italian fishermen, writing: The reputation of th ese boats was very great, and they were said to have been very fas t and seaworthy. In the 1880s,

the Italian fishermen were considered remarkable for the manner in which they carried sail in the strong winds that are so commo n in and about San Francisco Bay. T he lateen rig was a very dangerous one in unskilled hands; nevertheless these boats suffered ve ry few accidents, as the crew were generally very skillful in handling the rig. 5

The Replicas In 1976, Dean Stephens, a Mendocino Coun ty boatbuilder, along with No rman deVall and W illiam Gilke rson, built a replica of a felucca as an initial project for a boatbuilding school they were working to establish. 6 T hey encountered many difficulties in collecting documentation for it but, when the work was finished, had the satisfaction of seeing the boat adopted by the Italian comm uni ty of San Francisco as a symbol of their heri tage and their role in the development of the maritime comm uni ties of the West Coast. T heMatildaD. is now part of the collection at the San Francisco Maritime Park, and fo r years the elegant boat greeted visitors at the entrance to Hyde Street Pier. Today it can be seen in the Park&#39;s small craft collection . New understanding of the design of feluccas came with research on the original felucca hull added to the collection in rhe 198 0s. T he 22-foot Nuovo Mondo was constructed in 1986 by San Francisco boatbuilder Larry Hitchcock for the Maritime Park from the lines of the original hull and after extensive research in the Park&#39;s photographic archives. Since its launch in 1986, the staff of the

small craft department have continued to refine the historical accuracy of the Nuovo Mondo. In 1999, the Maritime Park decided to participate in Brest 2000 and sent eight American boats, including theNuovo Mondo, in two containers to France. Expecting close scrutiny of the vessel at Brest, John Muir and a crew of vo lunteers led by boatbuilder Robert Duncan combed historic photographs to more accurately render a number of Nuovo Mondo&#39; s construction details. In Brest their work was amply rewarded as the elegant Nuovo Mondo was judged very favo rably for the quali ty of her construction and care. The boat sailed in parades and regattas alongside lateen-rigged boats from France and Spain, rousing great enthusiasm among Mediterranean sailors, who had not known that the lateen sail traveled as far as the Golden Gate. In exch ange, sailors from Prove n ce and Catalonia imparted some lateen-rig techniques to Mr. Muir and his crew, helping them to recapture some of the lost skills of the San Francisco Bay&#39;s fearless felucca fishermen. Emboldened by their experience in Brest and Douarnenez, Mr. Muir and the San Francisco Maritime Park p lan to send the Nuovo Mondo overseas to La Regan a dela Vela Larina in Stintino, Sardinia, in 2003. This is one of the largest gatherings of lateen-rigged fishing vessels in the Mediterranean and features heated races between vessels from F ran ee, Italy and Spain. H ere, the Nuovo Mondo will hoist sail alongside its ancestors of the lateen rig, and its crew will further their unde rstanding of