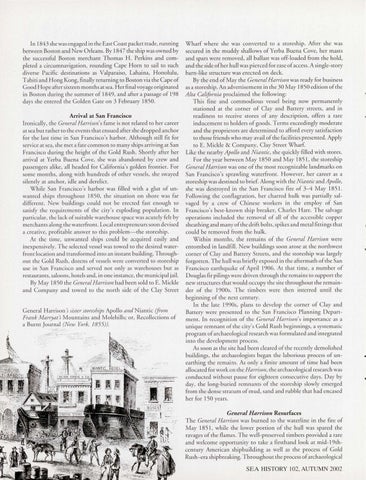 In 1843 she was engaged in rhe Easr Coasr packer rrade, running berween Boston and New Orleans. By 1847 rhe ship was owned by rhe successful Boston m erchant Thomas H. Perkins and complered a circumnavigarion, rounding Cape Horn to sail to such di verse Pacific desrinarions as Valparaiso, Lahaina, Honolulu, Ta hiri and Hong Kong, finally rerurning to Boston via rhe Cape of Good Hope afre r sixreen months ar sea. H er fin al voyage originared in Boston during the summer of 1849, and after a passage of 198 days she emered the Golden Gate on 3 February 1850.

Arrival at San Francisco Ironically, the General H arrison's fame is no t related to her career at sea but rather to the events that ensued after she dropped anchor for the last time in San Francisco's harbor. Although still fit for servi ce at sea, she met a fate common to many ships arri ving at San Francisco during the height of the Gold Rush. Shortly after her arrival at Yerba Buena Cove, she was abandoned by crew and passengers alike, all headed for California's golden fronti er. For some months, along with hundreds of other vessels, she swayed silently at anchor, idle and derelict. While San Francisco's harbor was filled with a glut of unwamed ships throughout 18 50, the siruation on shore was far different. New buildings could not be erected fasr enough to satisfy th e requirements of the ciry's exploding popul ation. In particular, rhe lack of suirabl e ware ho use space was acutely felt by merchants along the waterfront. Local entrepreneurs soo n dev ised a creative, profitable answer to thi s probl em- the storeship . At the time, unwanted ships could be acquired easily and inexpensively. T he selected vessel was rowed to rhe desired wa terfront location and transformed in to an instant building. Throughout the Gold Rush, dozens of vessels were converted to storeship use in San Francisco and served not o nly as warehouses but as restaurants, saloons, hotels and, in one insta nce, the municipal jail. By May 1850 the General Harrison had been sold to E. Mickle and Company and rowed to the no rth side of the Clay Street

Wharf where sh e was convened to a sroreship. Afrer she was secured in the muddy shallows ofYerba Buena Cove, her masts and spars were removed, all ballast was off-loaded from the hold, and the side of her hull was pierced for ease of access. A single-story barn-like strucrure was erected on deck. By the end of May rhe General H arrison was ready for business as a storeship. An advertisement in th e 30 May 1850 edirion of th e Alta California proclaimed rhe following: This fine and commodious vessel being now permanently stationed at the corner of C lay and Battery srreets, and in readiness to receive stores of any description, offers a rare inducement to holders of goods. Terms exceedingl y moderate and the proprietors are d etermined to afford every satisfaction to those friends who may avail of the faci liries presented. Apply to E. Mickle & Company, C lay Street Wharf. Like the nearby Apollo and Niantic, she quickly filled with stores. For the year berween May 1850 and May 1851 , the storeship General H arrison was one of the most recognizable landmarks on San Francisco's sprawling waterfront. However, her career as a storeship was destined to brief. Along with the Niantic and Apollo, she was des troyed in the San Francisco fire of 3-4 May 1851. Following the conflagration, her charred hulk was partially salvaged by a crew of Chinese workers in the employ of San Francisco's best-known ship breaker, C harles H are. The salvage operations included rhe removal of all of the accessible copper shearhing and man y of the drift bolrs, spikes and metal fittings that could be removed from rhe hulk. Within momhs, the remains of the General H arrison were entombed in landfill. New buildings soo n arose at the northwest corner of Clay and Battery Streets, and the storeship was largely forgotten. The hull was briefly exposed in the aftermath of the San Francisco earthquake of Ap ril 1906. Ar rhat time, a number of Douglas fir pilings were dri ve n through rhe remains to support the new srrucrures that wo uld occupy the site throughout the remainder of the 1900s. T he timbers were then interred until the beginning of the next century. In the late 1990s, plans to develop the corner of Clay and Battery were presented to the San Francisco Planning D epartment. In recognition of rhe General Harrison's importance as a unique remn am of the ciry's Gold Rush beginnings, a systematic program of arch aeol ogical resea rch was for mula red and integra red into th e development process. As soon as the site had been cl eared of the recendy demolished buildings, the archaeologists bega n the laborious process of unearthing the remains. As only a finite amount of time had been allocated for work on the H arrison, the archaeological research was conducted wirhour pause for eighteen consecutive days. Day by day, th e lon g- buried remn ants of th e storeship slowly emerged from th e den se strat um of mud, sand and rubble that had encased her for 150 years.

General Harrison Resurfaces T he General Harrison was burned to rhe ware rline in the fire of May 1851 , while the lower porrion of the hull was spared the ravages of the fl ames. T he well-preserved rimbers provided a rare and welcome opportuniry to take a firsthand look ar mid- 19thcentury American shipbuildin g as well as the process of Gold Rush-era shipbreaking. Throughour the process ofarchaeological SEA HISTORY 102, AUTUMN 2002

8 The Battle of Midway: America's First Victory in a Fleet Action in World War II, by H. P. Willmott, PhD • 14 The World of the Dutch East...

8 The Battle of Midway: America's First Victory in a Fleet Action in World War II, by H. P. Willmott, PhD • 14 The World of the Dutch East...