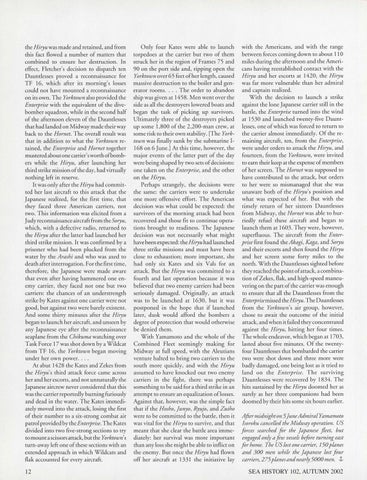 the Hiryu was made and retained, and from this fact flowed a number of matters that combined to ensure her destruction . In effect, Fletcher&#39;s decision to dispatch ten Dauntlesses proved a reconnaissance for TF 16, which after its morning&#39;s losses could not have mounted a reconnaissance on its own. The Yorktown also provided the Enterprise with the equivalent of the divebomber squadron, while in the second half of the afternoon eleven of the Dauntlesses that had landed on Midway made their way back to the Hornet. The overall result was that in addition to what the Yorktown retained, the Enterprise and Hornet together mustered about one carrier&#39;s worth ofbombers while the Hiryu, after launching her third strike mission of the day, had virtually nothing left in reserve. It was only after the Hiryu had co mmitted her last aircraft to this attack that the Japanese realized, for the first time, that they faced three American carriers, not two. This information was elicited from a Judy reconnaissance aircraft from the Soryu, which, with a defective radio, returned to the Hiryu after the latter had launched her third strike mission. It was confirmed by a prisoner who had been plucked from the water by the Arashi and who was axed to death after interrogation. For the first time, therefore, the Japanese were made aware that even after having hammered one enemy carrier, they faced not one but two carriers: the chances of an understrength strike by Kates against one carrier were not good, but against two were barely existent. And some thirty minutes after the Hiryu began to launch her aircraft, and unseen by any Japanese eye after th e reconnaissance seaplane from the Chikuma watching over Task Force 17 was shot down by a Wildcat from TF 16, the Yorktown began moving under her own power. ... At abut 1428 the Kates and Zekes from the Hiryu&#39;s third attack force came across her and her escorts, and not unnaturally the Japanese aircrew never considered that this was the carrier reportedly burning furiously and dead in the water. The Kates immediately moved into the attack, losing the first of their number to a six-s trong combat air patrol provided by the Enterprise. The Kates divided into two fi ve-s trong sections to try to mount a scissors attack, butthe Yorktown&#39;s tum-away left one of these secrions with an extended ap proach in which Wildcats and flak accounted for every aircraft. 12

Only four Kates were able to launch torpedoes at the carrier but two of them struck her in the region of Fram es 75 and 90 on the port side and, ripping open the Yorktown over 65 feet of her length, caused massive destruction to the boiler and generator rooms .... The order to abandon ship was given at 1458. Men went over the side as all the destroyers lowered boats and began the task of picking up survivors. Ultimately three of the destroyers picked up some 1,800 of the 2,200-man crew, at some risk to their own stability. [The Yorktown was finally sunk by the submarine I168 on 6 June.] At this time, however, the major events of the latter part of the day were being shaped by two sets of decisions : one taken on the Enterprise, and the other on the Hiryu. Perhaps strangely, the decisions were the same: the carriers were to undertake one more offensive effort. The American decision was what could be expected: the survivors of the morning attack had been recovered and those fit to continue operations brought to readiness. The Japanese decision was not necessarily what might have been expected: the Hiryu had launched three strike missions and must have been close to exhaustion; more important, she had only six Kates and six Vals for an attack. But the Hiryu was committed to a fourth and last operation because it was believed that two enemy carriers had been seriously damaged. Originally, an attack was to be launched at 1630, but it was postponed in the hope that if launched later, dusk would afford the bombers a degree of protection that would otherwise be deni ed them . With Yamamoto and the whole of the Combined Fleet seem ingly making for Midway at full speed, with the Aleutians venture halted to bring two carriers to the south more quickl y, and with the Hiryu assumed to have knocked out two enemy carriers in the fight, there was perhaps something to be said for a third strike in an attempt to ensure an equalization oflosses. Against that, however, was the simple fact that if the Hosho, Junyo, Ryujo, and Zuiho were to be committed to the battle, then it was viral for the Hiryu to survive, and that meant that she clear the battle area immediately: her survival was more important than any loss she might be able to inflict on the enemy. Bur once the Hiryu had flown off her aircraft at 133 1 the initiative lay

with the Americans, and with the range between forces coming down to about 110 miles during the afternoon and the Americans having reestablished contact with the Hiryu and her escorts at 1420, the Hiryu was far more vulnerable than her admiral and captain realized. With the decision to launch a strike against the lone Japanese carrier still in the battle, the Enterprise turned into the wind at 1530 and launched twenty-five Dauntlesses, one of which was forced to return to the carrier almost immediately. Of the rem aining aircraft, ten, from the Enterprise, were under orders to attack the Hiryu, and fourteen, from the Yorktown, were invited to earn their keep at the expense of m embers of her screen. The Hornet was supposed to have contributed to the attack, but orders to her were so mismanaged that she was unaware both of the Hiryu&#39;s posi tion and what was expected of her. But with the timely return of her sixteen Dauntlesses from Midway, the Hornet was able to hurriedly refuel these aircraft and began to launch them at 1603. They were, however, superfluous. The aircraft from the Enterprise first found theAkagi, Kaga, and Soryu and their escorts and then found the Hiryu and her screen some forty miles to the north. With the Dauntlesses sighted before they reached the point of attack, a combination ofZekes, flak, and high-speed maneuvering on the part of the carrier was enough to ensure that all the Dauntlesses from the Enterprise missed the Hiryu. The D auntlesses from the Yorktown&#39;s air group, however, chose to await the outcome of the initial attack, and when it failed they concen traced against the Hiryu, hitting her four times. The whole endeavor, which began at 1703, lasted about five minutes. Of the twentyfour Dauntlesses that bombarded tl1e carrier two were shot down and three more were badly damaged, one being lost as it tried to land on the Enterprise. The surviving Dauntlesses were recovered by 1834. The hits sustained by the Hiryu doomed her as surely as her three companions had been doomed by their hits some six hours earlier.

After midnight on 5 June Admiral Yamamoto Isoroku cancelled the Midway operation. US forces searched for the Japanese fleet, but engaged only a few vessels before turning east for home. The US lost one carrier, 150 planes and 300 men while the Japanese lost four carriers, 275 planes and nearly 5000 men. ~ SEA HISTORY 102, AUTUMN 2002