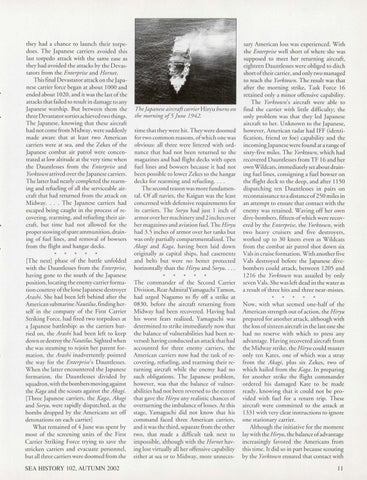 they had a chance to launch their torpedoes. The Japanese carriers avoided this las t torpedo attack with the same ease as they had avoided the attacks by the Devastators from the Enterprise and Hornet. This final Devastator attack on the Japanese carrier force began at about 1000 and ended about 1020, and it was the las t of the attacks that failed to result in damage to any Japanese warship . But berwee n them the three D evastator sorties achieved rwo things. The Japanese, knowing that these aircraft had not come from Midway, were suddenly made aware that at least rwo American carriers were at sea, and the Zekes of the Japanese combat air patrol were concentrated at low altitude at the very time when the D aundesses from the Enterprise and Yorktown arrived over the Japanese carriers. The latter had nearly completed the rearming and refueling of all the serviceable ai rcraft that had returned from the attack on Midway. . . . T he Japa nese carriers had escaped being caught in the process of recovering, rearming, and refueling their aircraft, but time had not allowed fo r the proper stowing ofspare amm unition, draining of fuel lines, and rem oval of bowsers from the flight and hangar decks.

* * * * * [The next] phase of the battle unfo lded with th e Daund esses from the Enterprise, having gone to the so uth of the Japanese position , locatin g the enemy carrier formation co urtesy of the lon e Japanese destroye r Arashi. She had been left behind afre r the Am erican submarin e Nautilus, finding herself in the co mpany of the First Carri er Striking Force, had fired rwo torpedoes at a Japanese battleship: as the carriers hurried on, the Arashi had been left to keep down or destroy the Nautilus. Sighted when she was steaming to rejoin her parent formation, the Arashi inadverten tly pointed the way for the Enterprise&#39;s Dauntlesses. Whe n the latte r enco untered the Japanese format ion, the Dauntlesses di vided by squadron, with the bombers moving against the Kaga and the sco uts against the Akagi. [Three Japanese carriers, the Kaga, Akagi and Soryu, were rapidly dispatched, as the bombs dropped by the Americans set off detonatio ns on each carrier) What remained of 4 June was spent by most of the screening units of the First Carri er Striking Fo rce trying to save the stricken carriers and evacuate personnel, but all three carriers were doomed from the SEA HISTORY 102, AUTUMN 2002

The Japan ese aircraft carrier Hiryu burns on the morning of5 June 1942. time that they were hit. They were doomed for rwo common reasons, of which one was obv ious: all three were littered with ordnance that had not been returned to the magazines and had fli ght decks with open fuel lines and bowsers because it had not been possible to lower Zekes to the hangar decks for rearming and refueling.... T he second reason was more fundamental. Of all navies, the Kaigun was the least concerned with defensive requirements fo r its carriers. T he Soryu had just 1 inch of armor over her machinery and 2 inches over her magazines and aviation fuel. The Hiryu had 3.5 inches of armor over her tanks but was only partially compartmentalized. The Akagi and Kaga, having been laid down originally as capital ships, had casements and belts but were no better protected horizontally than the Hiryu and Soryu . ...

The commander of the Second Carrier Division, Rear Admiral Yamaguchi Tamon, had urged Nagumo to fl y off a strike at 0830, before the aircraft returning from Midway had been recovered. H aving had his wo rst fears realized, Yamaguchi was determined to strike immediately now that the balance of vulnerabilities had been reversed: having conducted an attack that had acco unted for three enemy carriers, the American carriers now had the task of recovering, refuelin g, and rearming their returning aircraft while the enemy had no such obligations . T he Japanese problem, however, was that the bal ance of vuln erabilities had not been reversed to the extent that gave the H iryu any realistic chances of overturning the imbalance oflosses. At this stage, Yamaguchi did not know that his command faced three American carriers, and it was the third, separate from the other rwo, that m ade a difficult task next to impossible, although with the Ho rnet having lost virtually all her offensive capabili ty either at sea or to Midway, more unneces-

sary American loss was experienced. With the Enterprise well short of where she was supposed to meet her returning aircraft, eighteen Dauntlesses were obliged to ditch short of their carrier, and only rwo managed to reach the Yorktown. The result was that after the morning strike, Task Force 16 retained only a minor offensive capability. The Yorktown&#39;s aircraft were able to find the carrier with little difficulty; th e only problem was that they led Japanese aircraft to her. Unknown to the Japanese, however, American radar had IFF (identification , fri end or foe) capability and th e incoming] apanese were found at a range of sixty-five miles. The Yorktown, which had recovered Dauntlesses from TF 16 and her own Wildcats, immediately set about draining fuel lines, consigning a fuel bowser on the flight deck to the deep, and after 1150 dispatching ten Dauntlesses in pairs on reco nnaissance to a distance of250 miles in an attempt to ensure that contact with the enemy was retained . Waving off her own dive-bombers, fifteen of which were recovered by the Enterprise, the Yorktown , with rwo heavy cruisers and five destroyers, worked up to 30 knots even as Wildcats from the combat air patrol shot down six Vais in cruise formation. With another fi ve Vais destroyed before the Japanese divebombers could attack, berween 1205 and 1216 the Yorktown was assailed by only seven Vais. She was left dead in the water as a result of three hits and three near-misses.

* * * * * Now, with what seemed one-half of the American strength out of action, the H iryu prepared for another attack, although with the loss of sixteen aircraft in the last one she had no reserve with which to press any advantage . Having recovered aircraft from the Midway strike, the H iry u could muster only ten Kates, one of which was a stray from the Akagi, plus six Zekes, rwo of which hail ed from the Kaga. In preparing fo r another strike the flight commander ordered his dam aged Kate to be made ready, knowing that it could not be provided with fuel for a return trip . These aircraft were committed to the attack at 13 3 1 with very clear instructions to ignore one statio nary carrier. Although the initiative for the moment lay with the Hiryu, the balance of advantage increasingly favored the Americans from rhis rime. Ir did so in part because scouring by the Yorktown ensured that contact with 11