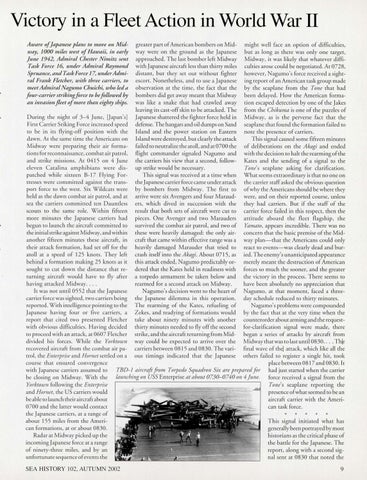 greater part of American bombers on Midway were on the gro und as the Japanese approached. The last bomber left Midway with Japanese aircraft less than thi rty miles distant, but they set out without fighter escort. Nonetheless, and to use a Japanese observation at the time, the fact that the bombers did get away meant that Midway was like a snake that had crawled away leaving its cast-off skin to be attacked. The Japanese shattered the fi ghter force held in defense. T he hangars and oil dumps on Sand Island and the power station on Eastern Island were destroyed , but clearly the attack failed to neutralize the atoll, and at 0700 the flight commander signaled Nagumo and the carriers his view that a second, followu p strike would be necessary. This signal was received at a time when the Japanese carrier force came under attack by bombers from Midway. The first to arrive were six Avengers and four Marauders, which dived in succession with the result that both sets of aircraft were cut to pieces. One Avenger and two M arauders survived the combat air patrol, and two of these were heavily dam aged : the only aircraft that came within effective range was a heavily damaged Marauder that tried to crash itself into the Akagi. About 0715 , as this attack ended, Nagumo predictably ordered that the Kates held in readiness with a torpedo armament be taken below and rearmed for a second attack on Midway. Nagumo&#39;s decision went to the heart of the Japanese dilemma in this operation. The rearming of the Kates, refueling of Zekes, and readying of formations would take about ninety minutes with another thirty minutes needed to fly off the second strike, and the aircraft returning from Midway could be expected to arrive over the carriers between 0815 and 0830 . The various timings indicated that the Japanese

might well face an option of difficulties, but as long as there was only one target, Midway, it was likely that whatever difficulties arose could be negotiated. At 0728, however, Nagumo&#39;s force received a sighting report of an American task group m ade by the seaplane from the Tone that had been delayed. How the American formation escaped detection by one of the Jakes from the Chikuma is one of the puzzles of During the night of 3-4 June, Uapan&#39;s] Midway, as is the perverse fact that the First Carrier Sriking Fo rce increased speed seaplane that found the formation failed to to be in its flying-off positio n with the note the presence of carriers. dawn. At the same time the Americans o n This signal caused some fifteen minutes Midway were preparing their air fo rmaof deliberations on the Akagi and ended tions for reconnaissance, combat air patrol, with the decision to halt the rearming of the and strike missio ns. At 04 15 on 4 June Kates and the sending of a signal to the eleven Catalin a a mphibi a ns we re di sTone&#39;s seaplane asking for cl arification. patched while sixteen B-1 7 Flying Fo rWhat seems extraordinary is that no one on tresses were committed against the transthe carrier staff asked the obvious question port force to the west. Six W ildcats we re of why the Americans should be where they held as the dawn combat air patrol , and at were, and on their reported course, unless sea the carriers co mmitted ten D auntless they had carriers . Bur if the staff of the scouts to the sam e role. Within fifteen carrier force fai led in this respect, then the more minutes the Japanese carriers had attitude aboard th e fl ee t fl ags hip, the begun to launch the aircraft co mmitted to Yamato , ap pears incredible. There was no the initial strike against Midway, and within co ncern that the basic premise of the Midanother fifteen minutes these aircraft, in way plan-that the Americans could only their attack formation, had set off for the react to events-was clearly dead and buratoll at a speed of 125 kn o ts. They left ied . T he enemy&#39;s un anticipated appearance behind a formation m aking 25 knots as it m erely m eant the des truction of American sought to cut down the distance that reforces so much the sooner, and the greater turning aircraft wo uld have to fl y after the victory in the process. There seems to having attacked Midway .. . . have been absolutely no appreciation that It was not until 0552 that th e Japanese Nagumo, at that moment, faced a threecarrier force was sighted, two carri ers being day schedule reduced to thirty minutes. reported. With intellige nce pointing to the Nagumo&#39;s problems were compounded Japa nese havin g fo ur o r five carriers, a by the fact that at the very time when the report that cited two presented Fletcher counterorder about armingand the requestwith obvio us difficulties. H aving decided for-clarification signal were made, there to proceed with an attack, at 0607 Fletcher began a series of attacks by aircraft from divided his forces . While the Yorktown Midway that was to last until 0830 .... Th~ recovered aircraft from the combat air pafin al wave of the] attack, which like all the trol, the Enterprise and Hornet settled on a others failed to register a single hit, took co urse that ensured convergence place between 081 7 and 0830. It TBD- 1 aircraft from Torpedo Squadron Six are prepared for had just started when the carrier with Japanese carriers assumed to launching on USS Enterprise at about 0730-0740 on 4 J une. force received a signal from the be closing on Midway. With the Yorktown fo llowing the Enterprise Tone&#39;s seaplane reporting the and Hornet, the US carriers wo uld presence ofwhat seemed to be an be ab le to laun ch their aircraft abo ut aircraft carrier with the Ameri0700 and the latter would contact can task force. the Japanese carriers, at a range of * * * * * abo ut 15 5 miles from the AmeriThis signal initiated what has can formations, at o r about 0830 . generally been portrayed by most Radar at Midway picked up the historians as the critical phase of incoming Japanese force at a range the battle for the Japanese. The of ninety-three miles, and by an report, along with a second sigunfortunate sequence of events the nal sent at 0830 that noted the SEA HISTORY 102, AUTUMN 2002