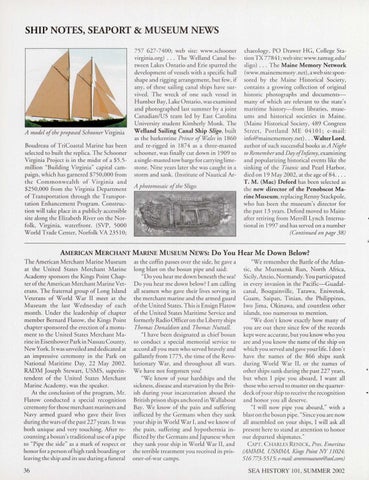 A model ofthe proposed Schooner Virginia Boudreau of Tri Coastal Marine has been selected to built the replica. The Schooner Virginia Project is in the midst of a $5.5million "B uilding Virginia" capital campaign, which has garnered $750,000 from th e Commonwealth of Virginia and $250,000 from rhe Virginia Department of Transportation through the T ransportation Enhancement Program. Construction will rake place in a publicly accessible site along the Elizabeth River on the Norfo lk, Virginia, waterfront. (SVP, 5000 World Trade Center, Norfolk VA 23510;

757 627-7400; web sire: www.schooner virginia.org) ... The Welland Canal berween Lakes Ontario and Erie spurred rhe development of vessels with a specific hull shape and rigging arrangement, but few, if any, of these sailing canal ships have survived. The wreck of one such vessel in Humber Bay, Lake Ontario, was examined and photographed last summer by a joint Canadian/US team led by East Carolina University student Kimberly Monk. The Welland Sailing Canal Ship Sligo, built as the barkentine Prince of Wales in 1860 and re-rigged in 187 4 as a three-masted schooner, was finally cut down in 1909 to a single-masted tow barge for carrying limesrone. Nine years later she was caught in a storm and sank. (Institute of Nautical Ar-

chaeology, PO Drawer HG, College Station TX 7784 1; web sire:www.tamug.edu/ sligo) ... The Maine Memory Network (www.mainememory.net), a web site sponsored by the Maine Hisrorical Society, contains a growing collection of original historic photographs and documentsmany of which are relevant to the state's maritime history-from libraries, museums and historical societies in Maine. (Maine Hisrorical Society, 489 Congress Street, Portland ME 04101; e-mail: info@mainememoty.net) ... Walter Lord, author of such successful books as A Night to Remember and Day ofInfamy, examining and popularizing historical events like the sinking of the Titanic and Pearl Harbor, died on 19 May 2002, atthe age of84 .... T. M. (Mac) Deford has been selected as the new director of the Penobscot Marine Museum, replacing Renny Stackpole, who has been the museum's director for the past 13 years. Deford moved to Maine after retiring from Merrill Lynch International in 1997 and has served on a number

AMERICAN MERCHANT MARINE MUSEUM NEWS: Do You Hear Me Down Below? The American Merchant Marine Museum at the United States Merchant Marine Academy sponsors the Kings Point C hapter of the American Merchant Marine Veterans. The fraternal group of Long Island Veterans of World War II meet at the Museum the last Wednesday of each month. Under the leadership of chapter member Bernard Flarow, the Kings Point chapter sponsored the erection of a monument to the United States Merchant Marine in Eisenhower Park in Nassau County, New York. Ir was unveiled and dedicated at an impressive ceremony in the Park on National Maritime Day, 22 May 2002. RADM Joseph Stewart, USMS, superintendent of the United Stares Merchant Marine Academy, was the speaker. At the conclusion of the program, Mr. Flatow conducted a special recognition ceremony for those merchant mariners and Navy armed guard who gave their lives during the wars of the past 227 years. Ir was both unique and very couching. After recounting a bosun's traditional use of a pipe to "Pipe the side" as a mark of respect or honor for a person of high rank boarding or leaving the ship and its use during a funeral

as the coffin passes over the side, he gave a long blast on the bosun pipe and said: "Do you hear me down beneath the sea? Do you hear me down below? I am calling all seamen who gave their lives serving in the merchant marine and the armed guard of the United States. This is Ensign Flatow of the United States Maritime Service and formerly Radio Officer on the Liberty ships Thomas Donaldson and Thomas Nuttall. "I have been designated as chief bosun to conduct a special memorial service ro accord all you men who served bravely and gallantly from 1775 , the rime of the Revolutionary War, and throughout all wars. We have not forgotten you! "We know of your hardships and the sickness, disease and starvation by the British during your incarceration aboard the British prison ships anchored in Wallabout Bay. We know of the pain and suffering inflicted by the Germans when they sank your ship in World War I, and we know of the pain, suffering and hypothermia inflicted by the Germans and Japanese when they sank yo ur ship in World War II, and the terrible treatment yo u received in prisoner-of-war camps.

"We remember the Barde of the Atlantic, rhe Murmansk Run, North Africa, Sicily,Anzio, Normandy. You participated in every invasion in the Pacific-Guadalcanal, Bougainville, Tarawa, Eniwetok, Guam, Saipan, Tinian, the Philippines, Iwo Jima, Okinawa, and countless other islands, too numerous to mention. "We don't know exactly how many of you are out there since few of the records kept were accurate, bur you know who you are and you know the name of the ship on which yo u served and gave your life. I don't have the n ames of the 866 ships sunk during World War II, or the names of other ships sunk during the past 227 years, but when I pipe you aboard, I want all those who served to muster on the quarterdeck of your ship to receive the recognition and honor you all deserve. "I will now pipe you aboard," with a blasron the bosun pipe. "Since you are now all assembled on your ships, I will ask all present here ro stand at attention to honor our depaned shipmates." CAPT. CHARLES RENICK, Pres. Emeritus

7 OCEANIC MISSION IV: They Said of Winston Churchill, Not Since Francis Drake Had Such a Man Been on the River, by Peter Stanford • 10 The...

7 OCEANIC MISSION IV: They Said of Winston Churchill, Not Since Francis Drake Had Such a Man Been on the River, by Peter Stanford • 10 The...