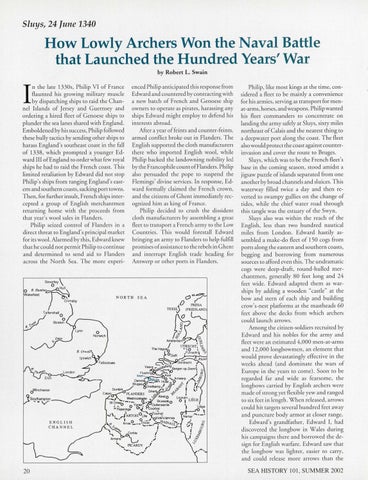 How Lowly Archers Won the Naval Battle that Launched the Hundred Years&#39; War by Robert L. Swain n the late 1330s, Phili p VI of France flaunted his growing mili tary muscle by dispatching ships to raid the Channel Islands of Jersey and G uernsey and ordering a hired fleet of Genoese ships to plunder the sea lanes shared with England. Emboldened by his success, Philip fo llowed these bully tactics by sending other sh ips to harass England&#39;s southeast coast in the fall of 1338 , which pro mpted a yo unger Edward III of England to order what few royal ships he had to raid the French coast. This limited retaliation by Edward did not stop Philip&#39;s ships from ranging England&#39;s eastern and southern coasts, sacking port towns. T hen, fo r further insul t, French ships intercepted a group of English merchantmen returning home with the proceeds from that year&#39;s wool sales in Flanders. Philip seized co ntrol of Flanders in a direct threat to England&#39;s principal market fo r its wool. Alarmed by this, Edward knew that he could not permit Philip to continue and determined to send aid to Flanders across the No rth Sea. The more experi-

enced Philip anticipated this response from Edward and countered by contracting with a new batch of French and Genoese ship owners to operate as pirates, harassing any shi ps Edward might employ to defend his interests abroad . After a year of feints and co unter-feints, armed co nflict broke out in Flanders. T he English supported the cloth manufac turers there who imported English wool, while Philip backed the landowning nobility led by the Francophile count ofFlanders. Philip also persuaded the pope to suspend the Flem ings&#39; divine services. In response, Edward fo rmally claimed the French crown, and the citizens of Ghent immediately recognized him as king of France. Phili p decided to crush the dissident cloth manufac turers by assembling a great f1eet to transport a French army to the Low Count ries. Th is wo uld fo restall Edward bringing an army to Flanders to help fulfill promises ofassistance to the rebels in Ghem and interrup t English trade heading for An twerp or other ports in Flanders.

Philip, like most kings at the time, considered a fleet to be mainly a convenience for his armies, serving as transport for menat-arms, horses, and weapons. Philip wanted his fleet com manders to concentrate on landing the army safely at Sluys, sixty miles no rtheast of Calais and the nearest thing to a deepwater port along the coast. The fleet also wo uld protect the coast against counterinvasion and cover the ro ute to Bruges. Sluys, which was to be the French fleet&#39;s base in the coming seaso n, stood amidst a jigsaw puzzle of islands separated from one another by broad channels and sluices. T his waterway fi lled twice a day and then reverted to swampy gullies on the change of tides, while the chief water road thro ugh this tangle was the estuary of the Swyn. Sluys also was wi thin the reach of the English, less than two hundred nautical miles from London . Edward has tily assembled a make-do fleet of 150 cogs from ports along the eastern and so uthern coasts, begging and borrowing from numerous sources to afford even this. T he undramatic cogs were deep-draft, ro und-hulled merchammen, generally 80 feet long and 24 feet wide. Edward adapted them as wa rships by addi ng a wooden &quot;castle&quot; at the bow and stern of each shi p and building crow&#39;s-nest platfo rms at the mastheads 60 fee t above the decks fro m which archers could launch arrows. Amo ng the citizen-soldiers recruited by Edward and his nobles fo r the army and fleet were an estimated 4,000 men-at-arms and 12,000 longbowmen, an element that wo uld prove devastatingly effective in the weeks ahead (and dominate the wa rs of Europe in the years to come). Soo n to be regarded fa r and wide as fea rsome, the longbows carried by English arch ers were made of strong ye t flexible yew and ranged ro six feet in length. W hen released , arrows could hit targets several hundred fee t away and puncture body arm or at closer range. Edward&#39;s grandfa ther, Edward I, had discovered the longbow in Wales during his campaigns there and borrowed the design fo r English warfare. Edward saw that the longbow was lighter, easier to carry, and could release more arrows than the