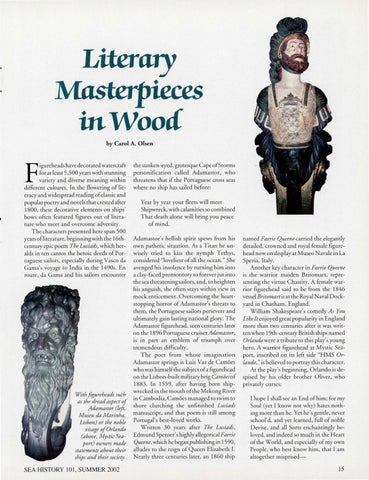 igureheads have decorated watercraft for at least 5,500 years with stunning variety and diverse meaning within different cultures. In the flowering of literacy and widespread reading of classic and popular poetry and novels that crested after 1800, these decorative elements on ships&#39; bows often featured figures out of literature who meet and overcome adversity. The characters presented here span 500 years ofliterature, beginning with the 16thcentury epic poem The Lusiads, which heralds in ten cantos the heroic deeds of Portuguese sailors, especially during Vasco da Gama&#39;s voyage to India in the 1490s. E n route, da Gama and his sailors encounter

the sunken-eyed, grotesque Cape ofStorms personification called Adamastor, who threatens that if the Portuguese cross seas where no ship has sailed before: Year by year your fleets will meet Shipwreck, with calamities so combined That death alone will bring you peace of mind.

Adamastor&#39;s hellish spirit spews from his own pathetic situation. As a Titan he unwisely tried to kiss the nymph Tethys, considered &quot;loveliest of all the ocean.&quot; She avenged his insolence by turn ing him into a clay-faced promontory to forever jut into the sea threatening sai lors, and, to heighten his anguish, she often stays within view in mock enticement. Overcoming the heartstopping horror of Adamastor&#39;s threats to them, the Portuguese sailors persevere and ultimately gain lasting national glory. The Adamastor figurehead, seen centuries later on the 1896 Portuguese cruiserAdamastor, is in part an emblem of triumph over tremendous difficulty. The poet from whose imagination Adamastor springs is Luis Vaz de Cam6es who was himself the subject of a figurehead on the Lisbon-built military brig Camoesof 1883. In 1559, after having been shipwrecked in rhe mouth of the Mekong River With figureheads such in Cambodia, Cam6es managed to swim to as the dread aspect of shore clutching rhe unfinished Lusiads Adamastor (left, Museu da Marinha, manuscript, and chat poem is still among Lisbon) or the noble Portugal&#39;s best-loved works. Written 30 years after The Lusiads, visage of Orlando Edmund Spenser&#39;s highly allegorical Faerie (above, Mystic SeaQueene, which he began publishing in 1590, port) owners made statements about their alludes to the reign of Queen Elizabeth I. ships and their society. Nearly three centuries later, an 1860 ship

named Faerie Queene carried the elegantly detailed, crowned and royal female figurehead now on display at M useo Navale in La Spezia, Italy. Another key character in Faerie Queene is the warrior maiden Britomart, representing the virtue C hastity. A female warrior figurehead said to be from the 1846 vessel Britomartis at the Royal Naval Dockyard in Chatham, England. William Shakespeare&#39;s comedy As You Like !tenjoyed great popularity in England more than two centuries after it was written when 19th-century British ships named Orlando were a tribute to this play&#39; s young hero. A warrior figurehead at Mystic Seaport, inscribed on its left side &quot;HMS Orlando,&quot; is believed to portray this character. At the play&#39;s beginning, Orlando is despised by his older brother O liver, who privately curses: I hope I shall see an End of him ; for my Soul (yet I know nor why) hares nothing more than he. Yer he&#39;s gentle, never school&#39; d, and yet learned, full of noble Devise, and all Sorts enchantingly beloved, and indeed so much in the Heart of the World, and especially of my own People, who best know him , that I am altogether misprised-