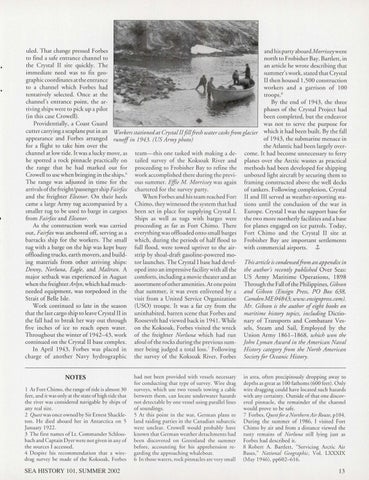 uled. That change pressed Forbes and his parry aboard Mo rrissey went to find a safe entrance channel to north to Frobisher Bay. Bartlett, in the Crystal II site quickly. The an article he wrote describing that immediate need was to fix geosummer&#39;s work, stated that Crystal graphic coordinates at the entrance II then housed 1,500 construction to a channel which Forbes had workers and a garrison of 100 tentatively selected. Once at the rroops. 8 channel&#39;s entrance point, the arBy the end of 1943, the three riving ships were to pi ck up a pilot ,., phases of the Crystal Project had (in this case Crowell). been completed, but the endeavor Providentially, a Coast Guard was not to serve the purpose for cutter canying a seaplane put in an Workers stationed at Crystal IIfill fresh water casks from glacier which it had been built. By rhe fall appearance and Forbes arranged runoff in 1943. (US Army photo) of 1943, the submarine menace in for a flight to take him over the the Atlantic had been largely overchannel at low tide. It was a lucky move, as team- this one tasked with making a de- come. It had become unnecessary to ferry he spotted a rock pinnacle practically on tailed survey of the Koksoak River and planes over the Arctic wastes as practical the range that he had marked out for proceeding to Frobisher Bay to refine the methods had been developed for shipping Crowell to use when bringing in the ships. 6 work accomplished there during the previ- unboxed light aircraft by securing them to The range was adjusted in time for the ous summer. Effie M. Morrissey was again framing constructed above the well decks arrivals of the freight/ passenger ship Fairfax chartered for the survey parry. of tankers. Following completion, Crystal and the freighter Eleanor. On their heels When Forbes and his team reached Fon II and III served as weather-reporting stacame a large Army tug accompanied by a Chi mo, they witnessed rhe system that had tions until rhe conclusion of the war in smaller tug to be used to barge in cargoes been set in place for supplying Crystal I. Europe. Crystal I was the support base for from Fairfax and Eleanor. Ships as well as tugs with barges were the rwo more northerly facilities and a base As the construction work was carried proceeding as far as Fort Chimo. There for planes engaged on ice patrols. Today, out, Fairfax was anchored off, serving as a everything was offloaded onto small barges Fort Chimo and the Crystal II sire at barracks ship for the workers. The small which, during the periods of half flood to Frobisher Bay are important settlements tug with a barge on the hip was kept busy full flood, were rowed upriver to the air- with commercial ai rports . J, offloading trucks, earth movers, and build- strip by shoal-draft gasoline-powered moing materials from other arriving ships: tor launches. The Crystal I base had devel- This article is condensedfrom an appendix in Denny, Norluna, Eagle, and Maltran. A oped into an impressive facilirywith all the the author&#39;s recently published Over Seas: major setback was experienced in August comforts, including a movie theater and an US Army Maritime Operations , 1898 when rhe freighter Arlyn, which had much- assortment of other amenities. At one point Through the Fall of the Philippines, Gibson needed equipment, was torpedoed in the that summer, it was even enlivened by a and Gibson (Ensign Press, PO Box 638, visit from a United Service Organization Camden ME 04843;www.ensignpress.com). Suait of Belle Isle. Work continued so late in rhe season (USO) troupe. It was a far cry from the Mr. Gibson is the author of eight books on that the last cargo ship to leave Crystal II in uninhabited, barren scene that Forbes and maritime history topics, including Dictiothe fall had to break her way out through Roosevelt had viewed back in 1941. While nary of Transports and Combatant Vesfive inches of ice to reach open water. on the Koksoak, Forbes visited the wreck sels, Steam and Sail, Employed by the Throughout the winter of 1942-43, work of rhe freighter Norluna which had run Union Army 1861-1868, which won the continued on the Crystal II base complex. afoul of rhe rocks during the previous sum- john Lyman Award in the American Naval In April 1943, Forbes was placed in mer being judged a total loss. 7 Following H istory category from the North American charge of another Navy hydrographic the survey of the Koksoak River, Forbes Society for Oceanic History.

NOTES 1 Ar Fort Chima, the range of ride is alm ost 30 feet , and it was only at rhe stare of high ride that the river was considered navigable by ships of any real size. 2 Quest was once owned by Sir Ernest Shackleton. He died aboard her in Antarctica on 5 January 1922. 3 The first names of Lr. Commander Schlossbach and Cap rain D yer were not given in any of the so urces I accessed. 4 D espite hi s reco mmendation that a wiredrag survey be mad e of rhe Koksoak, Forbes

had nor been provided with vessels necessary for conducting that rype of survey. W ire drag surveys, which use rwo vessels rowing a cable berween them, can loca te underwater hazards nor detectable by one vessel using parallel lines of so undings. 5 At this poim in rhe war, German plans ro land raiding parries in the Canadian subarctic were unclear. Crowell would probably have known that German weather detachments had been discovered on Greenland rhe summer before, acco unting for his apprehensio n regard ing the approaching whaleboat. 6 In those waters, rock pinnacles are very sm all

in area, often precipitously dropping away to depths as great as 100 fathoms (600 feet). Onl y wire dragging cou ld have lo cated such hazards with any cerrainry. Outside of that one discovered pinnacle, the remainder of the channel wo uld prove to be safe. 7 Forbes, Questfor a Northern Air Route, p 104. During the summer of 1986, I visited Fort Chima by air and from a distance viewed the rusry remains of Norluna still lying just as Forbes had described ir. 8 Robert A. Barrlerr, &quot;Servicing Arctic Air Bases,&quot; National Geographic, Vo l. LXXXIX (May 1946), pp602-616.