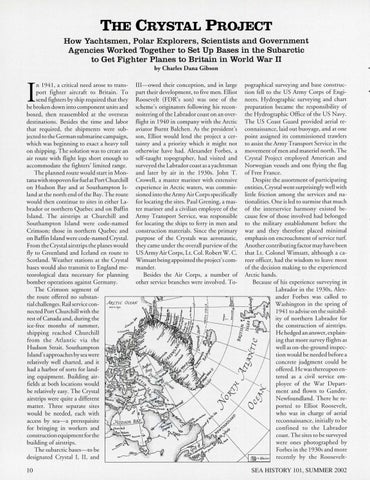 THE CRYSTAL PROJECT How Yachtsmen, Polar Explorers , Scientists and Government Agencies Worked Together to Set Up Bases in the Subarctic to Get Fighter Planes to Britain in World War II by Charles Dana Gibson

pographical surveying and base construction fell to the US Army Corps of Engineers. Hydrographic surveying and chart preparation became the responsibility of the Hydrographic Office of the US Navy. The US Coast Guard provided aerial reconnaissance, laid out buoyage, and at one point assigned its commissioned trawlers to assist the Army Trans port Service in the movement of men and materiel north. The Crystal Project employed American and Norwegian vessels and one flying the flag of Free France. Despite the assortment of participating entities, Crystal went surprisingly well with little friction among the services and nationalities. One is led to surmise that much of the interservice harmony existed because few of those involved had belonged to the military establishment before the war and they therefore placed minimal emphasis on encroachment of service turf. Another con tributing factor may have been that Lt. Colonel Wimsatt, although a career officer, had the wisdom to leave most of the decision making to the experienced Arctic hands. Because of his experience surveying in Labrador in the 1930s, Alexander Forbes was called to Washington in the spring of 1941 to advise on the suitability of northern Labrador for the construction of airstrips. He hedged an answer, explaining that more survey flights as well as on-the-ground inspection would be needed before a concrete judgment could be offered. He was thereupon entered as a civil service employee of the War Department and flown to Gander, Newfoundland. There he reported to Elliot Roosevelt, who was in charge of aerial reconnaissance, initially to be confined to the Labrador coast. The sites to be surveyed were ones photographed by Forbes in the 1930s and more recently by the Roosevelt-

n 1941, a critical need arose to trans- III-owed their conception, and in large port fighter aircraft to Britain. To part their development, to five men. Elliot send fighters by ship required that they Roosevelt (FDR&#39;s son) was one of the be broken down into component units and scheme&#39;s originators following his reconboxed, then reassembled at the overseas noitering of the Labrador coast on an overdestinations. Besides the time and labor flight in 1940 in company with the Arctic that required, the shipments were sub- aviator Burnt Balchen. As the president&#39;s jected to the German submarine campaign, son, Elliot would lend the project a cerwhich was beginning to exact a heavy toll tainty and a priority which it might not on shipping. The solution was to create an otherwise have had. Alexander Forbes, a air route with flight legs short enough to self-taught topographer, had visited and surveyed the Labrador coast as a yachtsman accommodate the fighters &#39; limited range. The p lanned route would start in Mon- and later by air in the 1930s. John T. tana with stopovers for fuel at Port Churchill Crowell, a master mariner with extensive on Hudson Bay and at Southampton Is- experience in Arctic waters, was commisland at the north end of the Bay. The route sioned into the Army Air Corps specifically would then continue to sites in either La- for locating the sites. Paul Grening, a masbrador or northern Quebec and on Baffin ter mariner and a civilian employee of the Island. The airstrips at Churchill and Army Transport Service, was responsible Southampton Island were code-named for locating the ships to ferry in men and Crimson; those in northern Quebec and construction materials. Since the primary on Baffin Island were code-named Crystal. purpose of the Crystals was aeronautic, F com the Crystal airstrips the planes would they came under the overall purview of the fly to Greenland and Iceland en route to US Army Air Corps, Lt. Col. Robert W . C. Scotland. Weather stations at the Crystal Wimsatt being appointed the project&#39;s combases would also transmit to England me- mander. Besides the Air Corps, a number of teorological data necessary for planning bomber operations against Germany. other service branches were involved. ToThe Crimson segment of the route offered no substantial challenges. Rail service con- .Aizcnc ow.JI nected Port Churchill with the rest of Canada and, during the ice-free months of summer, shipping reached Churchill from the Atlantic via the Hudson Strait. Sourhampton Island&#39;s approaches by sea were relatively well charted, and it had a harbor of sorts for landing equipment. Building airfields at both locations would be relatively easy. The Crystal airstrips were quite a different matter. Three separate sites would be needed, each with access by sea-a prerequisite for bringing in workers and construction equipment for the building of airstrips. The subarctic bases-to be designated Crystal I, II, and